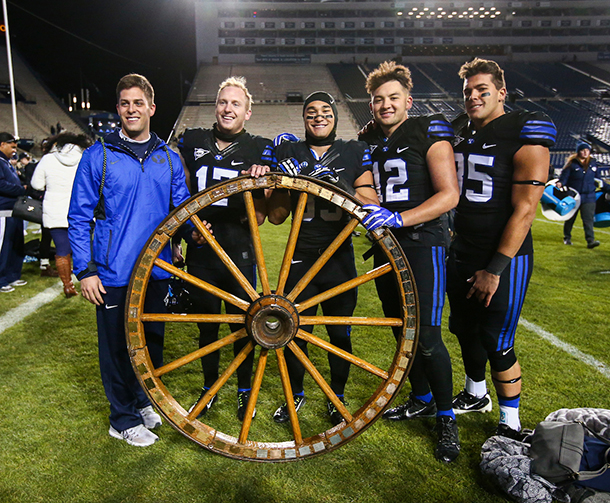 Looking to avoid their fourth straight loss, the BYU football team will battle Utah State in a crucial game on Friday.

The last time the Cougars found themselves sitting at 1–3 was in 2010 when they had their fourth loss handed to them by none other than the Utah State Aggies (31–16) in Logan. BYU will travel up north to Maverik Stadium hoping history won’t repeat itself.

These statistics manifest themselves in the fact that the Cougars have only scored four touchdowns and put up a total of 39 points this season. They are the only team in the nation to average less than 10 points per game (9.8). 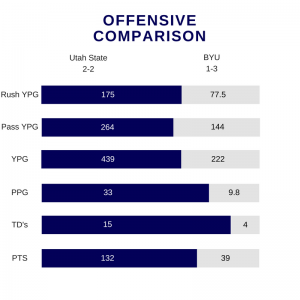 “I think the attention that the offense is drawing is taking away a lot of the good things I think we’re doing in our other two phases,” Sitake said. “But there are still a lot of positives on the offensive side that we’re seeing. We just need to find ways to make plays and get first downs and get points on the board.”

While a poor start isn’t what the team hoped for, BYU finds themselves in familiar territory. Last year, the Cougars found themselves with an identical 1–3 record before facing Toledo. It was a 55–53 win over the Rockets that launched BYU into winning seven of their eight remaining games of the season. They then went on to beat Wyoming in the Poinsettia Bowl.

While there is certainly room for improvement, Sitake remains confident in his team.

Historically, BYU has played well against Utah State. This is the 87th meeting between the two schools, with a 48–35–3 BYU advantage. More recently, the Cougars are 8–2 against the Aggies in the last 10 games, including last year’s 28–10 win at LaVell Edwards Stadium and a commanding 51–28 win in Logan in 2015. The Cougars will look to add one more to the win column and take that “Old Wagon Wheel” home once again.