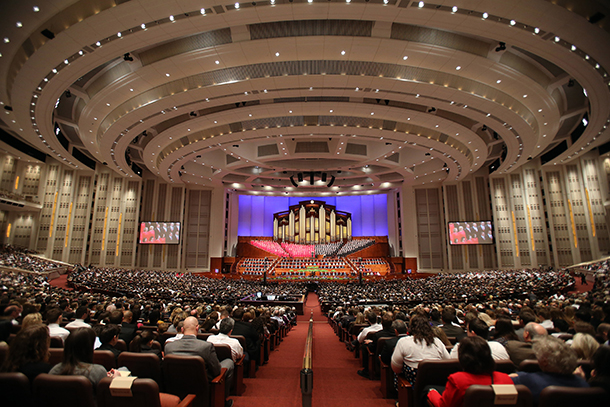 The 187th Semiannual General Conference for The Church of Jesus Christ of Latter-day Saints began last weekend with the Women’s Session of conference and continued again Saturday morning.

General Conference lasts for a total of six sessions totaling 12 hours. While the LDS Church leaders give specific instruction and teach gospel principles during conference, here is a quick overview of the messages shared by each of the speakers.

Women play their part in the gospel by being righteous, articulate, different, distinct and doing all of that happily.

Our sins and pride create a gap between us our Heavenly Father, but the Savior’s Atonement closes that gap.

“The Spirit will confirm to each of us individually our divine worth.”

When you feel inadequate, rely on the Lord.

Seek to uplift and serve others in your community and ward; attend meetings with the intent to be a “giver and a supplier.”

The gospel plan every family should follow is outlined in “The Family: A Proclamation to the World.”

Everyone has a role here on earth, so we must yield ourselves to God so He can use us for his work.

Adopt Christ into our hearts and our everyday lives.

Don’t let our desires to be perfect debilitate us.

Christ gave us a winning life when he gave us the Atonement and the opportunity to repent.

Be humble and modest in life.

Elder Ronald A. Rasband, Quorum of the Twelve

There are no coincidences in life — the Lord is an active participant in our lives.

Develop the same heart as the widow in the story of the widow’s mite, willing to sacrifice for the growth of the Lord’s church.

Do you cherish the Book of Mormon for the blessing it is?

Like the rocket delivers the payloads, the priesthood delivers the gospel of Jesus Christ and the covenants we make with the Lord.

Put the work in to gain your own testimony of the gospel of Jesus Christ.

Place your trust in the Lord; then earn the trust of Lord as well as your wives and your children.

Receive the light of Christ, live in that light and share that light with others through your actions.

It takes faith to receive revelation that God calls men to be his prophets and apostles on the earth, and everyone has the ability to receive that revelation.

“Lasting joy is found in focusing on our Savior, Jesus Christ, and living the gospel as demonstrated and taught by Him.”

Recognize the miracles in your life because this life is a miracle.

Elder David A. Bednar, Quorum of the Twelve

The “exceeding great and precious promises” from God are found in our sabbath observance, in the home and in the temple.

While life may take us on an unexpected path, we can have hope and peace through the atoning sacrifice of Jesus Christ.

“To look beyond what we see, we must look at others through the eyes of our Savior.”

“Be consistent and persistent in following the prophet’s counsel,” and know faith drives out fear.

“The trek back to our Heavenly Father is the most important trek of our lives.”

The Book of Mormon exists because of revelation from God.

Members of the church should be united in their efforts to help each other return to our Heavenly Father.

Hard times can be good for us as long as we move forward with faith and trust in our Heavenly Father.

“From the First Vision and the Prophet Joseph Smith, we received knowledge of the reality and sacred mission of the Lord Jesus Christ, who is the cornerstone of our religion.”

When we have questions about the church, we are invited to ask God for answers.

Through service and forgiveness and real love, we can be healed.

Follow the example of the prophets in how they turn their faith to action.