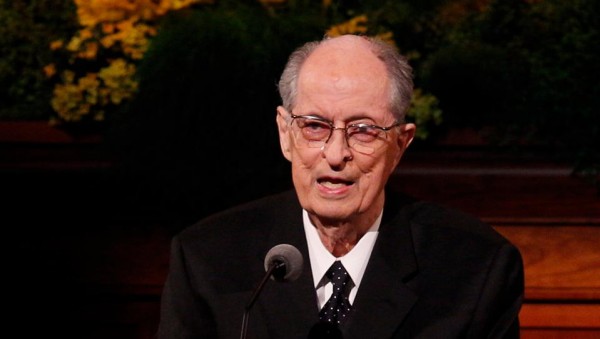 Elder Robert D. Hales, member of the Quorum of the Twelve Apostles of The Church of Jesus Christ of Latter-day Saints, died on Sunday, Oct. 1, 2017. He was 85.

The LDS Church announced he died from causes incident to age, passing peacefully at the hospital surrounded by his wife and family.

Elder Hales was sustained as a member of the Twelve on April 2, 1994, after serving as Presiding Bishop since 1985. Elder Hales also served as an assistant to the Quorum of the Twelve Apostles and as a member of the First Quorum of the Seventy. But though he spent many of his later years in the heart of Salt Lake City, Elder Hales’ education, career and church callings took him and his family all over the world. 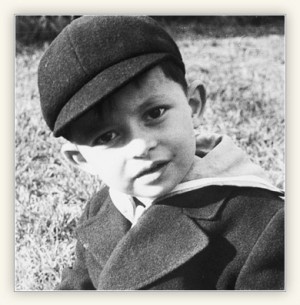 Elder Hales smiles as a boy. (Photo via LDS.org)

Elder Hales was born in New York City on August 24, 1932. His parents, J. Rulon and Vera Marie Holbrook Hales, both grew up in the West — Rulon in Rexburg, Idaho, and Marie in Bountiful, Utah. They raised their three children on Long Island, New York, while  faithfully serving in various positions in the Queens Ward.

When Elder Hales was a deacon, he and his father went to the Sacred Grove. The experience he had there helped shape his budding testimony.

“There we prayed together and dedicated our lives,” Elder Hales said in an lds.org article. “Then he talked to me of sacred things. When we got back home, my father, who worked as an artist in New York City, painted a picture of the Sacred Grove for me. I’ve always hung that picture in my office, and when I look at it, I remember my father and our talk that summer afternoon.”

Elder Hales was a baseball fan from a young age. He was the starting pitcher on his school’s varsity baseball team as a freshman, and he continued pitching while a student at the University of Utah.

A pitching slump while Elder Hales was in high school led his team to a three-game losing streak. The school newspaper dubbed him “Hard Luck Hales” in a headline, and he was discouraged. Then his coach taught him a valuable lesson in pitching that he remembered for the rest of his life.

The coach told young Robert that he was losing because he was showing off before the game, throwing fastballs and curveballs, when he should have been warming up with more conservative throws. “Quit showing off,” his coach said, “and you won’t wear out  your arm.” Robert’s team won their next game in a shutout.

“That’s why you love a coach who will tell you what you need to hear,” Elder Hales said later in an interview with the Liahona. “If you listen to your coach, you can avoid repeating your mistakes and have a better opportunity to achieve your goals. The Lord is like that too. I don’t get tired of the chastening of the Lord or the Lord’s anointed.” 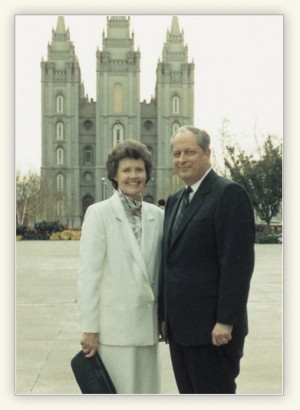 Elder Hales stands with Mary outside the Salt Lake Temple.(Photo via LDS.org)

Elder Hales met Mary Crandall at his parents’ ward in Queens while home for the summer from the University of Utah. She was a student at Brigham Young University who was also spending the summer in New York with her family. After Elder Hales met Mary, he never went on a date with another girl. They spent the summer together and were married in the Salt Lake Temple the following summer on June 10, 1953.

Robert and Mary’s marriage was one of complete equals.

“They are a total partnership,” their daughter-in-law Susan told the Liahona. “Any couple could pattern their marriage after them. Their relationship is 100 percent equal; one does not dominate the other. Each opinion is valued.”

Mary matched Robert in strength, work ethic and testimony. When Elder Hales was called as the elders quorum president while an MBA student at Harvard, Mary encouraged him to accept the call. When Elder Hales’ work assignment took them to Germany, he had to leave Mary and their two small children immediately so he could attend meetings in Berlin.

“Mary got the boys into school, learned to find her way around the busy autobahn, and eventually learned to speak German,” he told the Liahona. “This was typical. She has always made it work.”

One of Elder Hales’ bosses once told him that Mary was his “greatest asset.” Elder Hales agreed and never forgot it.

As far as assets go, Elder Hales had more than a few. He was Harvard-educated. He received his MBA there in 1960 after receiving a bachelor’s degree from the University of Utah. He also served in the U.S. Air Force as a jet fighter pilot for three and a half years.

During his career, Elder Hales held executive positions with four major national companies — Gillette Co., Papermate, Max Factor and Hughes Television Network. He was also president of Chesebrough-Pond’s, where he was working when he received the call to be a general authority.

Elder Hales’ career took him and his family all over the world — to England, Germany, Spain and several areas of the United States including Massachusetts, Georgia, Minnesota and Louisiana. Elder Hales was glad for these opportunities. He had wanted to live internationally ever since he attended school with the children of United Nations representatives in New York City. 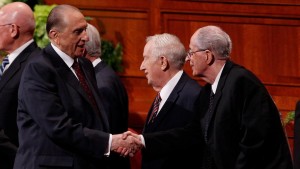 Elder Hales frequently taught Church members — missionaries in particular — to “return with honor.” This phrase became meaningful to Elder Hales during his time in the United States Air Force from 1954 to 1958. “Return with Honor” was his unit motto.

“This motto was a constant reminder to us of our determination to return to our home base with honor after we had expended all of our efforts to successfully complete every aspect of our mission,” Elder Hales told the Liahona. He hoped missionaries would “return with honor” after expending their best efforts on their missions as well.

To All the World: Church service as a general authority

Elder Hales served as an assistant to the Quorum of the Twelve Apostles from 1975 until 1976, when the position was discontinued and he was called as a Seventy. He served as president of the England London Mission from 1978 to 1979 while serving as a member of the Seventy and served as Presiding Bishop from 1985 to 1994. He was called as an apostle in 1994, filling the vacancy created by the death of Elder Marvin J. Ashton.