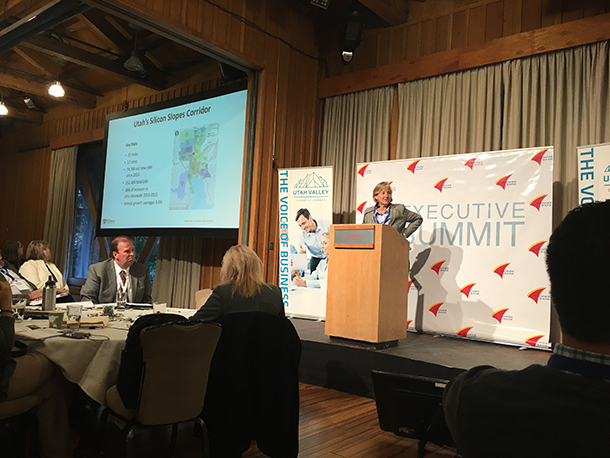 Natalie Gochnour, the director of the Kem G. Gardner Policy Institute, speaks during the 2017 Executive Summit hosted at Sundance by the Utah Valley Chamber of Commerce. (Photo by UV360)

The economies of Utah County and Salt Lake Counties are colliding at the Point of the Mountain, and the result is 2+2=8, according to Natalie Gochnour, one of 20 speakers at Monday’s 2017 Executive Summit hosted at Sundance by the Utah Valley Chamber of Commerce.

Gochnour is the director of the Kem G. Gardner Policy Institute and an associate dean in the David Eccles School of Business at the University of Utah. She shared robust data that shows Utah County driving the engine of the state from nearly every angle.

“You have a simple choice,” Gochnour told the business executives in attendance. “You can let the growth happen and react to it, or you can guide it and be proactive about where Utah County is headed.”

Here are 20 takeaways from this annual, rapid-fire event.

Utah County is leading the job growth in the state. Since 2010, 40 percent of the new jobs created have been in Utah County.

The state’s two largest counties are merging at the bursting Point of the Mountain, which catapults Utah County’s metro area into a “whole new category when it comes to attracting employees and capitalizing on opportunity.”

5. Invest in transportation or competitive advantage is gone

Transportation is one of Utah County’s most important priorities. “You have to face this and you have to invest mightily,” Gochnour cautioned the Utah Valley attendees. “Growth will be your constant companion, and more mass transit will be required to deal with an aging and growing population. Utah County must constantly set aside money to invest in transportation or the competitive advantages in this county may slip away.”

Utah County may need to adjust its approach to taxes. “We have a tax system that doesn’t match the type of growth you’re going to experience,” Gochnour says. “You must think about how you can have new users help pay for the costs they impose on the area, including water rates, etc.”

Growth is going to hurt. “My crystal ball tells me that Utah County has the most significant forces of change, and that change will be disruptive for many people. It will be uncomfortable and traditions will have to change,” Gochnour says.

8. Age is more than a number

The aging population changes everything. “Baby boomers are living longer, and our fertility rate has declined for eight consecutive years,” Gochnour says. “As the consumers change, so do housing preferences and needs of health care.”

9. Definition of ‘college-age’ is changing

We must see higher education as more than a young adult “thing.” “Lifelong learning is a given now,” Gochnour says. “We must constantly invest in our workforce or we won’t get the results we are capable of as an economy.”

Utah County has the power. “The political and economic power is shifting to Utah County,” Gochnour says. “And as that happens, you’ll become more like your northern neighbor.” 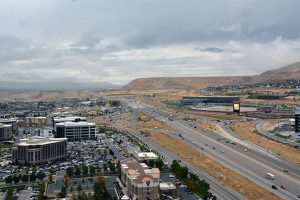 Since 2010, more than 58,000 jobs have been generated just in the Point of the Mountain area, and the growth is expected to continue. (Photo by Rebecca Lane/UV360)

Gov. Herbert heralded our county’s economic strength in general, and then named specifically Duncan Airlines, which will create more than 700 jobs in the next 15 years. The GDP in Utah County is 5.8, which is three times the national average. “The economy in Utah is healthy, and Utah County is the epicenter for that.”

UVU leads the state’s institutions with the number of students: 36,000+, according to Jeff Olson, UVU’s senior vice president of academic affairs.

13. Utah County-ites DO ride the bus

During a transportation panel, Mary DeLaMare-Schaefer of UTA reported that last year there were 2.4 million boardings on buses in Utah County. “When people tell me nobody rides the bus in Utah County, I tell them it is not true,” DeLamare-Schaefer says.

The biggest transportation challenge in Utah County is east-west traffic, according to Shane Marshall, UDOT’s deputy director. “Widening University Parkway helps us with that challenge, but we don’t have great east-west corridors throughout the county,” Marshall says. “The primary roads all run north-south.” Discussion did touch on a bridge across Utah Lake, which could cost $500 million to $1 billion to build. With that pricetag the bridge is unlikely, the transportation panelists surmised.

To build upon the 3,500 companies in Utah that are exporting, Utah is looking to create an “inland port,” with specialities in customs, containers, legal, etc.

“Around here, the tech leaders are celebrating for each other, and we need to make sure others outside of Utah know about these things. Utah has a branding problem. People outside the state don’t understand what we are doing here.” — Marcus Liassides, president of Sorenson Media

Since 2010, more than 58,000 jobs have been generated just in the Point of the Mountain area, and the growth is expected to continue. The state legislature and committees will be presenting preferred scenarios for assisting the growth of the area in the coming months. “It’s a challenge because it involves two counties and at least five municipalities,” says Rep. Larry Snow, who co-chairs the Point of the Mountain Development Commission. “But this is not just about us. This is about adequately planning for this area so our children and grandchildren can thrive here.”

18. Office space mostly on the upswing

Commercial construction continues to have positive momentum, although not the growth as in years past. Brandon Fugal of Coldwell Banker Commercial Advisors highlighted Freedom Plaza in downtown Provo, which “will set a new tone for business in the county and punctuate the fact that Provo is really the central business district of Utah County.” Other commercial highlights include at least 600,000 square feet of office space masterplanned for University Place. One downside is 400,000 vacant square feet at Canyon Park. But other highlighted projects include Valley Grove in Pleasant Grove, Lehi Spectrum, Lone Peak Plaza and Innovation Pointe, as well as numerous company headquarters, including some companies such as ASEA relocating from Salt Lake County.

19. Utah knows how to celebrate

A Silicon Slopes panel moderated by Clint Betts brought to light the strengths and unique qualities of our business community, including our willingness to collaborate and share successes. Marcus Liassides, president of Sorenson Media, said that in other tech communities, nobody wants to talk about another company’s success. “Around here, the tech leaders are celebrating for each other, and we need to make sure others outside of Utah know about these things. Utah has a branding problem. People outside the state don’t understand what we are doing here.”

Boyd Martin, division president for DR Horton, says we don’t have a housing bubble. “Everyone who gets a loan for a house right now can quality for that loan,” Martin says. He is, however, concerned about the rising cost of land prices and impact fees imposed by cities. Lastly, he said Pinterest and other social media are changing the housing trends quickly. While the white farmhouse has been popular for years, he has recently seen the trend turn to black farmhouse styles.

UV To Do: Calendar of events for October 2017 Previous post