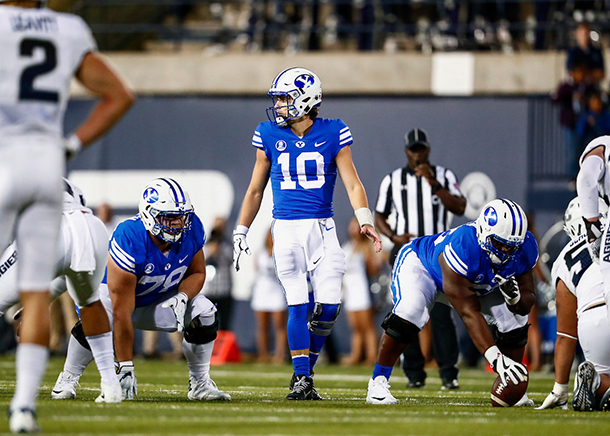 In case you didn’t get a chance to catch all of BYU and UVU’s games this weekend, here’s a recap of their competition.

The BYU football team lost 40–24 on the road to Utah State on Friday night and moved to 1–4 on the year.

Despite a season-high 210 rushing yards and four sacks, the Cougars couldn’t overcome a devastating seven turnovers.

“We had way too many errors for us to overcome and have a chance to win this game,” BYU head coach Kalani Sitake said in a press release.

Despite throwing a pick-six, sophomore quarterback Beau Hoge showed promise early on as he went 5-for-9 for 95 yards and recorded two touchdowns before suffering a game-ending concussion in the second quarter. Third-string quarterback Koy Detmer Jr. then replaced Hoge for BYU and threw an interception near the end of the first half that resulted in a field goal for Utah State. Still, the Cougars only trailed 24–21 at halftime.

But the third quarter was a nightmare for Cougar fans as every possession resulted in a BYU turnover, including one turnover on downs, two fumbles, and a Detmer interception.

The fourth quarter wasn’t much better for BYU. An early field goal for the Cougars wasn’t enough to get back into the game as they followed that drive with more turnovers, including another pick-six. The game ended with a final score of 40–24.

“We’re going to evaluate everything again,” Sitake said. “The only choice we have is to go back to square one and try to find a way to win games and try to get this win against Boise State next week.”

The last time the Cougars were 1–4 was in 2010 when they also lost their fourth game to the Aggies. They will look to get back on track against Boise State on Friday, Oct. 6 in Provo.

Sophomore outside hitter McKenna Miller led BYU with 14 kills with junior outside hitter Veronica Jones-Perry right behind her with 13. Senior opposite hitter Cosy Burnett contributed with 11 kills and freshman outside hitter Taylen Ballard added nine of her own.

“I’m really proud of how focused the team was coming into this match,” BYU head coach Heather Olmstead said in a press release. “I could talk about every single player and specifically what they did well, but the best way to describe it is a team win.”

The win pushes BYU to 15–1 on the season and 4–0 in conference play, keeping them tied with Gonzaga for first place. They will remain on the road to play Saint Mary’s on Thursday.

Despite outshooting the University of San Diego 31 to six, the BYU women’s soccer team lost their first conference game of the season 2–1 on Friday. The Toreros scored two early goals and led 2–0 at halftime. Sophomore Elise Flake scored for BYU off a penalty kick in the 79th minute to cut the deficit in half, but the Cougars were unable to score again.

“I thought we had a lot of good looks,” BYU head coach Jennifer Rockwood said in a press release. “I’m really pleased with the way we played. This team has battled. We’re resilient, and we’ll bounce back.”

The loss was BYU’s first home loss in a WCC game in six years. The Cougars will look to redeem themselves with a win on Saturday, Oct. 7 against Saint Mary’s in Provo.

“Anytime we get together it’s going to be a brawl, and it was that way again today,” UVU head coach Sam Atoa said. “It was good volleyball, competitive volleyball, and we were just one swing away.”

Despite the loss, three UVU players recorded double-doubles. Senior outside hitter Lexi Thompson had a double-double including 11 digs and a match-high 19 kills, while senior middle blocker Madison Dennison had 10 kills and a season-high 10 blocks. Sophomore setter Madi Wardle contributed with a career-best 46 assists and 16 digs.

After playing their first three conference games on the road, the Wolverines will return to Orem to face UT Rio Grande Valley on Thursday, Oct. 5.

The Wolverines scored three first-half goals to shut out Seattle University 3–0 on Saturday night as they snapped a four game losing streak and improved to 4–8 on the season.

“The big thing is that our initial goal for the game was just to start one half at a time and give up zero goals in the first half,” UVU head coach Chris Lemay said. “Scoring the goals was icing on the cake. We’ve had some things not go our way in past games and I felt like we’ve been close in a lot of them so for us to be able to capitalize and reap the reward of what we’ve been working on makes me proud of our team.”

Senior forward Sydney Fitzpatrick gave UVU an early lead by scoring in the second minute. Sophomore midfielder Breanna DeWaal followed by scoring her fourth goal of the year and the second for UVU in the 36th minute. Shortly after, freshman forward Amber Tripp scored the third UVU goal in the 42nd minute. The team never let Seattle score, earning their first shutout win of the season.

The Wolverines will look to ride their momentum as they go on the road to face Texas A&M on Monday night.

The UVU men’s soccer team competed in their first conference game of the season against San Jose State on Friday night. Sophomore Alec Felix scored his first college career goal, giving UVU the 1–0 lead in the 67th minute. Dominating the game and with less than two minutes to go, the Wolverines looked to have the victory in the bag until a goal was scored in the 87th minute by San Jose State sending the game into overtime. The teams battled through two overtimes, neither able to put the ball in the back of the net resulting in a 1–1 draw.

“I thought it was a very mature performance on our part aside from the last minute and a half of regulation,” UVU head coach Greg Maas said in a press release. “We’ve got to be able to lock down a game in those moments.”

The Wolverines looked to bounce back against CSU Bakersfield on Sunday but lost a tough, close game 1–0. UVU now sits at 3–6–1 on the year. They will try for their first conference win against Incarnate Word on Friday, Oct. 6.

UV To Do: Calendar of events for October 2017 Next post