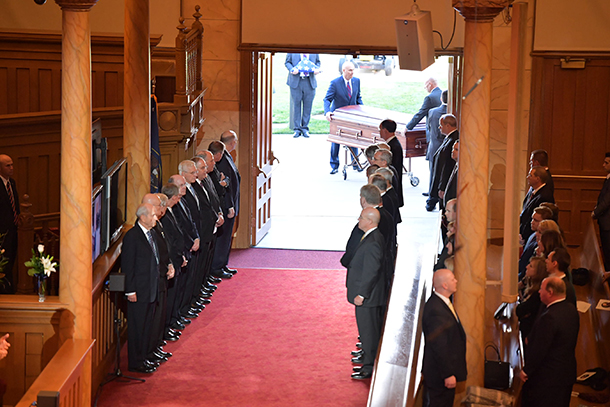 The Quorum of the Twelve Apostles for the LDS Church line the path for Elder Robert D. Hales’ casket to be wheeled into the funeral service at the Tabernacle on Temple Square. (Photo courtesy of LDS Church)

At the age of 85, Elder Robert D. Hales, member of the Quorum of the Twelve Apostles of The Church of Jesus Christ of Latter-day Saints, died on Sunday, Oct. 1, 2017.

Family, friends and fellow apostles gathered for the funeral service of Elder Robert D. Hales, an apostle for The Church of Jesus Christ of Latter-day Saints, at the Tabernacle on Temple Square Friday morning. All of the members of the First Presidency and Quorum of the Twelve Apostles attended the funeral except for President Thomas S. Monson and Elder Jeffrey R. Holland.

“With the courage of a jet pilot, the tenacity of an athlete, humility and devotion of a disciple of the Lord, Elder Hales has completed his mission in a most exemplary way,” President Eyring said. “He has passed the tests of mortality and returned home with the highest honors. His apostolic responsibilities will continue there on the other side of the veil.” 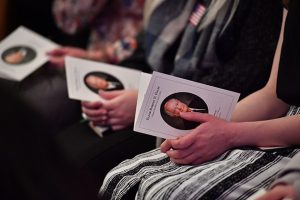 Elder Ballard, who knew and worked with Elder Hales for 40 years, talked about how Elder Hales was on the “fast track” to becoming a major CEO of a New York stock exchange corporation. The two would sit next to each other in meetings and Elder Ballard appreciated Elder Hales contributions in those moments.

“His wise counsel and depth, insights into what we are facing in the church today will also be greatly be missed by all of us,” Elder Ballard said.

How to endure health challenges

Throughout his life, Elder Hales dealt with multiple health challenges, including heart attacks.

“As we’ve sat together over these many years, I’ve witnessed the great courage and complete dedication of Robert D. Hales,” Elder Ballard said. “Many times I’ve reached over, touched his arm and held his hand, and in a small way felt the pain and the difficulty he was experiencing.”

Despite his illnesses, Elder Hales served in the church faithfully.

“Bob’s perseverance in the face of health challenges is legendary,” added President Nelson. “He carried on despite the seriously debilitating effects of unrelenting challenges to his health. We who have watched him have wondered how he could do it.”

Be a loyal friend

Of that memory, President Eyring said: “He was lying on his back, he opened his eyes wide, reached out to take my hand, gripped it hard, and said, ‘They made me come back.’

“I have no way to know if he was deceased for a brief time that afternoon, or if it was a dream, but his I do know, he felt in the moment of intense testing that he was supposed to do something difficult and he was loyal to the command he had received.

“For me, it was another moment, just one of the many I had with him, when whatever the cost and how difficult the commandment, he was loyal to his family and friends, to the Lord and to the Lord’s prophet.” 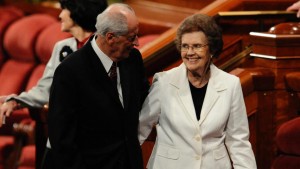 Joking about being present for one of Elder Hales’ heart surgeries, President Nelson said, “I know Bob’s heart. Literally.” And then later added, “Having served with Bob for so long, I know that his spiritual heart is pure.”

President Eyring discussed Elder Hales desire to testify of Christ in this past weekend’s general conference saying he had worked tirelessly to write a short talk.

“His effort was so great that his strengths began to fail,” President Eyring said. Elder Hale was admitted to the hospital days before the 187th Semiannual General Conference began its Saturday Morning Session of conference. President Nelson expressed similar regards.

Despite being a successful businessman, at the age of 42 Elder Hales received a call from the prophet and was asked to leave his career to serve in the church.

“To him, the call was not from a man, but from a friend to whom he was loyal,” President Eyring said. “To Robert D. Hales and Mary Crandall Hales, hearing a call from the president of the church was the same as hearing the Lord’s voice.”

President Nelson reference the hymn, “Softly and Tenderly,” as he thought of his fellow apostle: