5 plays that changed the game for BYU against Boise State 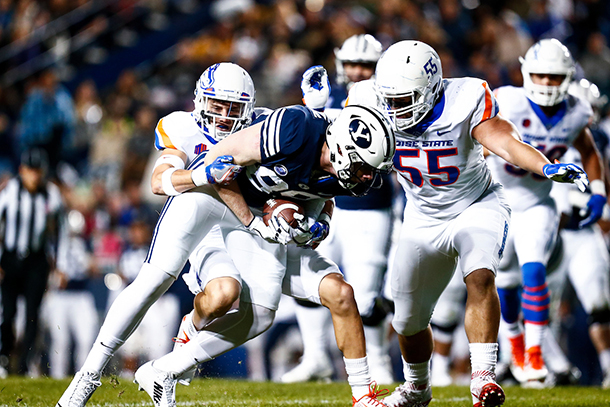 Nothing seems capable of waking the sleepwalking BYU offense. Even the return of Tanner Mangum to the lineup against Boise State did not change the end result.

Mangum started against the Broncos on Friday night after being sidelined for two games with an ankle injury. A promising start quickly turned into a sour finish. The Cougars suffered their fifth straight loss, falling 24–7 to Boise State after generating just 238 total yards.

Playing for the first time in a month, Mangum threw for 164 yards on 18-of-33 passing and had two interceptions.

“We weren’t consistent in our execution,” Mangum said. “We couldn’t finish drives and a lot of that lands on me. I need to be more consistent with taking care of the ball and driving the ball down the field.”

“We weren’t consistent in our execution. We couldn’t finish drives and a lot of that lands on me. I need to be more consistent with taking care of the ball and driving the ball down the field.” — Tanner Mangum, BYU quarterback

BYU is 1–5 overall for the first time since 1970. The Cougars have not totaled 200 passing yards in nine straight games dating back to a 37–7 win over SUU last season.

Finding the correct pieces to complete BYU’s offensive puzzle has been an exercise in frustration for the coaches and players alike.

“You can respond from adversity and you can get back on the right track,” BYU coach Kalani Sitake said. “The goal is to try and turn this thing and that’s what we’re going to try and do.”

Here are five key plays that changed the game for the Cougars on Friday night:

Nothing changed BYU’s fortunes faster than suffering a turnover late in the second quarter. The Cougars had great field position after forcing Boise State to punt and taking over at their own 46-yard line. BYU immediately lost momentum when Mangum threw his first interception on a pass intended for Matt Bushman.

Kekoa Nawahine stepped in front of the errant ball and returned it 51 yards to the BYU 22-yard line. The Cougars forced Boise State to settle for a go-ahead 20-yard field goal from Haden Hoggarth. But the damage was done. The Broncos also scored on their next drive to take a 17–7 halftime lead and were never seriously threatened by BYU’s offense in the second half.

“We didn’t execute the way we could,” Mangum said. “I didn’t take care of the ball and threw a pick. That really changed the momentum. I have to be better there. They are a good team and they did some things that made us change the way we had to do things.” 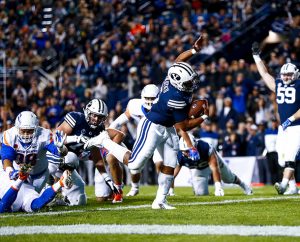 BYU freshman Ula Tolutau runs the ball three yards into the end zone on the Cougars only touchdown of the game. (Photo by BYU Photo)

Trailing by 10 points in the third quarter, BYU had a chance to force a 3-and-out and obtain favorable field position to mount a potential comeback. Boise State faced 3rd-and-11 from its own 17-yard line. The Cougar defense couldn’t get a stop when it needed one.

Cedrick Wilson caught a short screen pass over the middle and turned it into a 14 yard gain. It turned out to be the first of four third down conversions for the Broncos on the drive. Boise State eventually marched down into the red zone and capped the drive with a two-yard TD run from Alex Mattison less than a minute into the fourth quarter. It would end up being the final touchdown for either team.

Sophomore receiver Micah Simon officially finished with two receptions for nine yards. He nearly had a spectacular third reception that could have changed BYU’s fortunes in a hurry. Simon hauled in a 34 yard pass at the Boise State 27 for what would have been his first catch during his team’s initial fourth quarter drive. A holding penalty wiped out the play.

Mangum came back and completed a 17-yard dart to Trey Dye on the very next play to get BYU near midfield. The Cougar offense stalled, however, and turned it over on downs three plays later. BYU came up short on 4th-and-1 when Mangum overthrew a diving Jonah Trinnaman.

The door slammed shut on BYU after its second fourth quarter drive ended in the team’s second turnover of the night. Before it happened, the Cougars mounted one of their few promising drives of the night.

Mangum completed three straight short passes to get BYU from midfield down to the Boise State 36. He dialed up a deep ball to Neil Pau’u on 2nd-and-5. Pau’u had a potential touchdown within reach, but could not hold onto the ball after it hit him in the hands as he crossed the goal line.

Mangum threw an interception two plays later and Leighton Vander Esch returned it 37 yards to the BYU 40 with 5:22 remaining. That snuffed out any lingering hope that BYU could rally late.

“Consistency is the issue,” Sitake said. “When you start off hot and it tempers down, it’s not good. We’ve got to find a way to keep that momentum and keep it rolling. We started fast and the goal now is to sustain it and finish strong and we haven’t been able to do that on offense.” 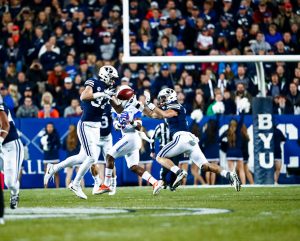 BYU senior Grant Jones intercepts a pass during the first half of the BYU-Boise State football game. (Photo by BYU Photo)

Boise State’s opening drive ended in a turnover and raised hopes among Cougar fans that this game would be the one to break the team’s long losing skid. Making his first career start, Grant Jones reeled in an interception at the BYU 32 yard-line and returned it across midfield. Jones read Brett Rypien perfectly, stepped into the passing lane and made an impressive one-handed grab.

“We ran blitzes,” Jones said. “They had pressure on them and I was in the right spot at the right time.”

BYU cashed in on the turnover right away. The Cougars marched 48 yards in 10 plays and scored their only touchdown on a 3-yard run from Ula Tolutau. They held that 7–0 lead through the remainder of the first quarter before Boise State tied it up in the second quarter on a 12-yard run from Alex Mattison.