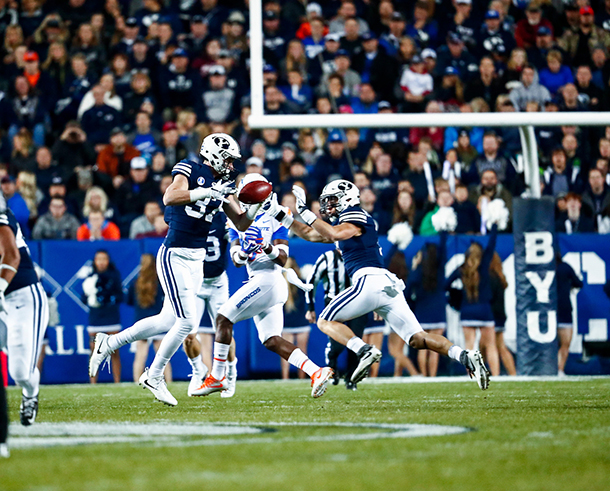 BYU senior linebacker Grant Jones intercepts a pass during the first half of the BYU-Boise State football game. (Photo by BYU Photo)

If you were as busy as the Cougars and Wolverines were this weekend, chances are you didn’t get to catch all the action. Here’s a recap of how it all went down.

The BYU football team lost 24–7 to Boise State on Friday night and moved to a disappointing 1–5 on the year.

The game started out promising for BYU, as senior linebacker Grant Jones snagged an interception on the first drive of the game. BYU quarterback Tanner Mangum then took the Cougars 48 yards down the field and capped it off with a touchdown midway through the first quarter. But those were the only points for BYU all night.

“We did some positive things,” BYU head coach Kalani Sitake said. “We really don’t have a chance to compete if we’re unproductive on offense though. We’re anxious to get to work and fix things.”

The Cougars will need to win six of their final seven games to be bowl-game eligible. They will play Mississippi State on the road on Saturday, Oct. 14.

Read “5 plays that changed the game for BYU against Boise State” here.

“The team came out focused on what they wanted to do today,” BYU head coach Heather Olmstead said. “Our offense and defense executed at a high level against a good Pacific team.”

The Cougars return home, where they are 5–0, for a big week. First playing Portland on Thursday followed by Gonzaga on Saturday, Oct. 14.

The Cougars dominated the match, with midfielder Bizzy Bowen and forwards Madie Lyons Mathews and Avery Walker all scoring in the first half. Mathews put another ball in the back of the net in the second half that put BYU up 4–0. The Gaels scored once in the second half, but it wasn’t enough to beat the Cougars.

“We’ve spent countless hours working on our attack, and tonight it paid off,” BYU head coach Jennifer Rockwood said. “We had a great week of training and it translated to four goals.”

The win put BYU at 4–5–3 on the year. They will look for another victory as they take on Pacific at home this Thursday, Oct. 12.

“This was a big win,” UVU head coach Sam Atoa said. “We’ve struggled against New Mexico State recently, so this was key to keep us in the top half of the conference standings.”

The Wolverines improved to 8–12 on the season and move to 3–2 in conference play. They will hit the road this week to take on Chicago State on Thursday and UMKC on Saturday.

“Now we have to take care of other things. We’ll focus to our upcoming matches on the road,” Atoa said. “If we can turn things around in the second half of the season, like we did last year, I like our chances.”

UVU women’s soccer takes a split over the weekend

The UVU women’s soccer team lost 3–0 to UMKC on Friday night, but bounced back in a big way with a 9–0 shutout win over Chicago State on Sunday.

“I’m proud of our team for handling the travel, refocusing, and coming out hungry for a win,” UVU head coach Chris Lemay said. “We had a number of players step up and we executed in front of the goal better than we have in previous matches. We were proud to earn another shutout with a great defensive effort. We’re excited to get back home for three matches in front of our fans.”

The Wolverines moved to 5–10 overall and 1–1 in conference play. They return home this week for a three-game home stand, first taking on New Mexico State on Thursday.

The UVU men’s soccer team suffered a couple of disappointing losses over the weekend including a 2–1 loss against Incarnate Word on Friday and a 3–0 loss to UT Rio Grande Valley on Sunday.

The Wolverines fell to 3–8–1 on the year and 0–3–1 in conference play. They will head home for a three-game home stand looking to get back on track. They will first try to snap a three-game losing streak against UMKC on Thursday.

“Winning is contagious, but unfortunately so is losing,” UVU head coach Greg Maas said. “This team is in a position we’ve never experienced, but the players and coaching staff are determined to persevere and keep fighting to turn this season around.”

ICYMI: One third of UVU female students have experienced sexual misconduct Next post