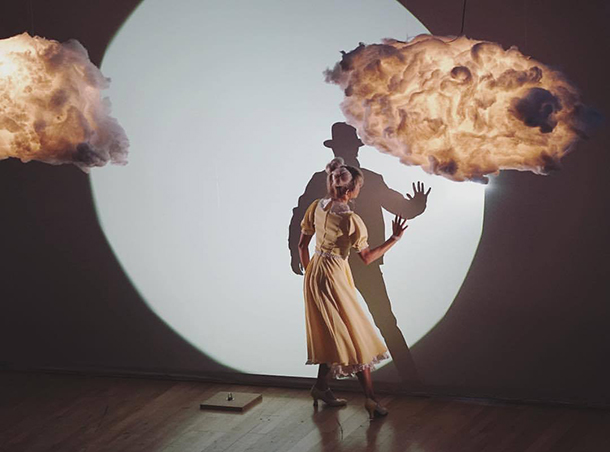 Lindsey Stirling mirrors the shadows of her dance partner, Mark Ballas, who played the role of her father in the Viennese waltz. Stirling’s father died from cancer in January 2017. (Photo courtesy of Lindsey Stirling Facebook)

It was an emotional week on “Dancing With the Stars” for Lindsey Stirling as she worked on a routine to honor her father who died in January after battling cancer.

“My dad was the best dad in the world,” Stirling said in the introductory video before the dance. “He had this boisterous personality and he always wore a scarf and a hat. It was his signature.”

For her “Most Memorable Year” dance, Lindsey Stirling and her partner Mark Ballas danced a Viennese waltz to “Anchor” by Mindy Gledhill, a Provo, Utah singer. Ballas — representing her Lindsey Stirling’s father in this routine — wore her father’s signature hat and scarf during the routine.

I’ll be doing a dance tomorrow in honor of my dad. Preparing for it has made this an extremely emotional week. I want it to be so so special to honor him and what he did for me. In so many ways I am the woman I am today because of his inspiration, his creativity, his humor and because the sacrifices he made for his family. I know he’ll be with me tomorrow. I love you dad.

In 2016, Stephen Stirling, Lindsey’s father, learned he had cancer.

“It was the hardest year of my life to watch someone I love so much just kind of deteriorate. I was out on tour and every time I would go home, it would be worse. And finally that realization hit that he’s not going to get better.

“He made me from a very young age realize it’s OK to be different.” — Lindsey Stirling, violinist

“The last moments of my dad’s life were some most special moments I’ve ever experienced. My sisters, my mom and I were all around his bed, we’re holding his hands and we started telling stories of dad. Before we knew it, we were laughing and we were crying and all the bitterness and all the anger went away because rather than being angry for what I was losing I was so grateful for what I had.”

In the introductory video, Lindsey Stirling’s mom, Diane Stirling, called Lindsey and her father “kindred spirits.” Lindsey expressed gratitude to her father, who was a freelance writer, for going into teaching so that she could take violin lessons.

“If I could say one more thing to my dad it would be ‘thank you because I am the woman I am today because of you, and I love you so much,'” Lindsey Stirling said.

For her dance, Lindsey Stirling and Ballas earned a 26 out of 30. The score was high enough to land her in third place behind first place’s Jordan Fisher and Lindsay Arnold, who scored a 29, and second place’s Victoria Arlen and Valentin Chmerkovskiy’s, who scored a 27.

Former Utah Jazz player Derek Fisher was eliminated from the show at the end of the night.

In 2015, Stirling received her degree in recreation management from BYU. A classically trained violinist from Gilbert, Arizona, Stirling earned her way to fame through her YouTube channel. The BYU graduate has a unique style of music that blends pop and violin — and it is all accomplished while she dances.’

“Dancing With the Stars” returns on Monday, Oct. 16 at 7 p.m. with another live show and elimination.