BYU football in desperate need of a win against Mississippi State 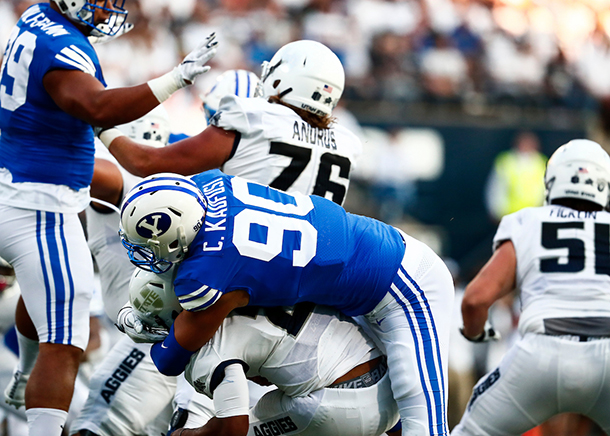 The BYU football team now sits at 1–5 after losing 24–7 to Boise State last Friday night, marking their worst season start in over 40 years.

The Cougars now find themselves in serious danger of ending their 12-year bowl game appearance streak. Out of the seven games remaining, the team needs to win six to be eligible.

“It’s disappointing, but we have to move on and get to work,” Sitake said. “We have to figure out a way to get this thing turned around and try to get that done. We had a good practice and all we can do is put in the work and see what happens afterwards.”

The Cougars now face a 3–2 Mississippi State team on the road. With 253 rushing yards per game, the Bulldogs sit at 17th in the nation in rushing offense. It’s a tough test that the BYU defense is looking forward to.

“I think it’s going to be a great challenge,” said senior defensive lineman Kesni Tausinga. “I always love going against good opponents like the SEC teams and the Power 5 teams because it gives us an opportunity to test our skills.”

“I don’t blame the players, they give us all the effort. Us as coaches have to get it done.” — Kalani Sitake, BYU head football coach

As for the offense, the Cougars remain at the bottom of the college rankings. Their 254 offensive yards per game is third worst in college football. Even worse than that, BYU is only averaging 11.7 points per game ranking them 128th out of 129 FBS teams — issues that aren’t lost on the coaching staff.

“I don’t blame the players, they give us all the effort,” Sitake said. “Us as coaches have to get it done.”

It’s a tall task to ask of anyone — to turn the season completely around and win six of the remaining seven games — but particularly so of a team who has seen four quarterbacks on the field in just the last two games. Quarterback Tanner Mangum did start in the game against Boise State, a promising sign for Cougar fans that his ankle is on the mend. Mangum did complete 18 of 33 passes for 164 yards in the game, but also threw two interceptions.

“What Tanner (Mangum) did for us first quarter was really good, but we need to be consistent as a group,” Sitake said. “We just need to see consistency from all of our positions and quarterback is obviously the most important one for us right now.”

The rest of the Cougar offense knows the desperate situation they’re in and is ready to tackle it head on.

“There is a sense of urgency for everybody right now and everybody is eager to get out there, make plays and get better,” said junior running back Trey Dye.

Coming off a bye week, Mississippi State is looking to snap a two-game losing streak. The Cougars and Bulldogs meet for just the fourth time with BYU holding a 2–1 edge. The last meeting between the two took place last year at LaVell Edwards Stadium where the Cougars took a double overtime 28–21 win.