BYU volleyball looks to distance themselves from Gonzaga 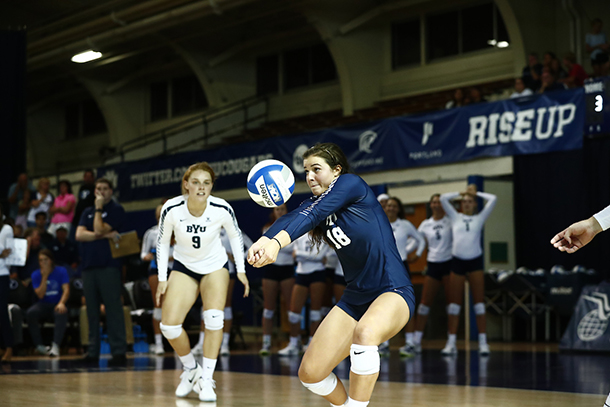 BYU libero Mary Lake passes the ball during a game at the Smith Fieldhouse. (Photo by BYU Photo)

Coming off a sweep over Portland, the No. 7 BYU volleyball team looks to keep their unblemished conference record and take a two-game first place lead in the West Coast Conference over Gonzaga in a big game on Saturday.

The Cougars have dominated the season with a stunning 18–1 overall record and a 7–0 record in conference play. At 11–8, Gonzaga struggled early on in the year but then matched BYU’s perfect conference record until Thursday night when they lost in three sets to San Diego.

“Gonzaga’s doing a good job,” BYU head coach Heather Olmstead said. “They’re scrappy. They’re fighting and scrapping and playing good volleyball so it’ll be nice to see them on our home court on Saturday and see what kind of style they’re playing this year.”

The winner of the game will help their season dramatically. A road win would be huge for Gonzaga as it would tie their conference record with the Cougars. For BYU, the win would mean they take a two-game lead over the Bulldogs with 11 games to go.

“I like how mindful our kids are being. They’ve decided that they want to pay attention to the details and I think that matters.” — Heather Olmstead, BYU volleyball coach

The recent loss to San Diego does set Gonzaga back in the rankings, however. They are now tied for second place with the Toreros behind first place BYU. Still, the Bulldogs have shown resiliency since entering conference play, winning its first five matches in five sets before only needing three to beat Loyola Marymount last week. The Cougars on the other hand have only seen four five-set matches all year, most recently in their comeback win against Saint Mary’s on Oct. 5.

Olmstead attributes the team’s success to the focus and determination of the players.

“I like how mindful our kids are being,” Olmstead said. “They’ve decided that they want to pay attention to the details and I think that matters.”

The Cougars are currently riding a 10-game win streak and have yet to lose a home match this year. They’re also 15–1 all-time against the Bulldogs, including victories in the last ten meetings, but they’re not taking anything for granted.

“You have to be on your A-game especially if you’re gonna go on the road,” Olmstead said. “But we know that at home too, nobody is just gonna give it to us so we have to pay attention to detail.”

BYU plays Gonzaga on Saturday, Oct. 14 at 1 p.m. at the Smith Fieldhouse on BYU’s campus. The game will be streamed live on TheW.tv.