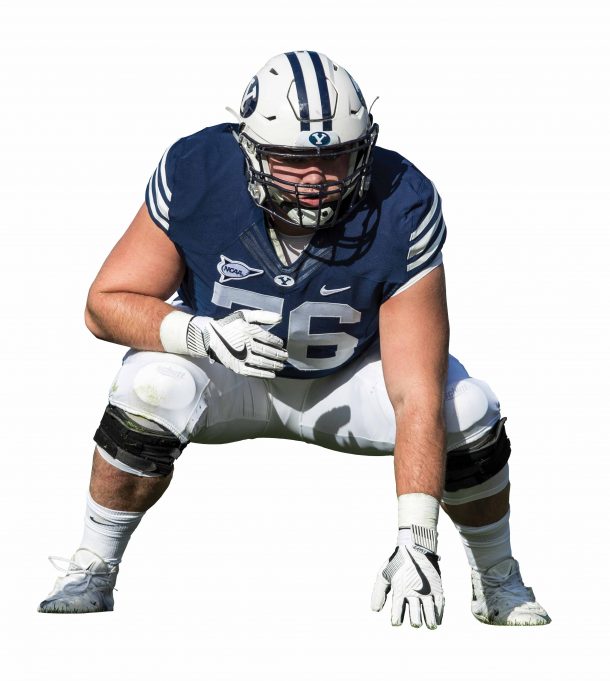 The term “student-athlete” is often focused on the “athlete” part of the moniker. However, for senior offensive lineman and Lone Peak High grad Keyan Norman, the “student” part comes first.

After graduating early from SUU (where he started his career and played two seasons under BYU assistant head coach Ed Lamb), Keyan transferred to BYU and started all 13 games at guard last season.

“I wanted to be able to come here without sitting out a year, so I worked really hard to get the credits required to graduate after my sophomore year of eligibility,” he says.

He completed 44 credits in two semesters and graduated a T-Bird. Then, he immediately entered a master’s degree program in the Marriott School of Management where he’s working on a Master in Public Administration degree, which he should complete this year.

But that’s not the end goal.

“Law school has been my plan since high school,” he says.

He’s already been accepted to BYU’s J. Reuben Clark Law School on a full scholarship and plans to start next fall after completing his senior season.

Keyan, who is the grandson of MLB great Dane Iorg, isn’t the only degree earner in his family. His wife, Ashley, graduated from BYU and just finished a master’s degree in accounting from the University of Utah. She’s now working for a local accounting firm, allowing Keyan the opportunity to focus on studying … with a little football thrown in.

Favorite restaurant: JCW’s. “We go get fries and shakes with our other married friends,” Keyan says.

Hobbies “Keyan is a huge Utah Jazz fan,” Ashley says. Keyan’s dad has season tickets and his son is seen next him as often as schedules allow.

What about Utah Valley do you defend most to teammates? “The biggest thing I defend is the feeling some of my teammates have about Utah Mormons,” Keyan says. “I tell them, if you’re looking for something, you’ll find it anywhere. Utah Valley, for the most part, is full of great people doing their best to be good to others.”

Fan highlight? “Any time a kid comes up and talks to you is always cool,” Keyan says.

Perks of a Cougar in the family? “We were babysitting my young cousin and he called from school and said he was sick,” Ashley says. “When I showed up to pick him up, he was mad I didn’t have Keyan with me so he could show all of his friends.”