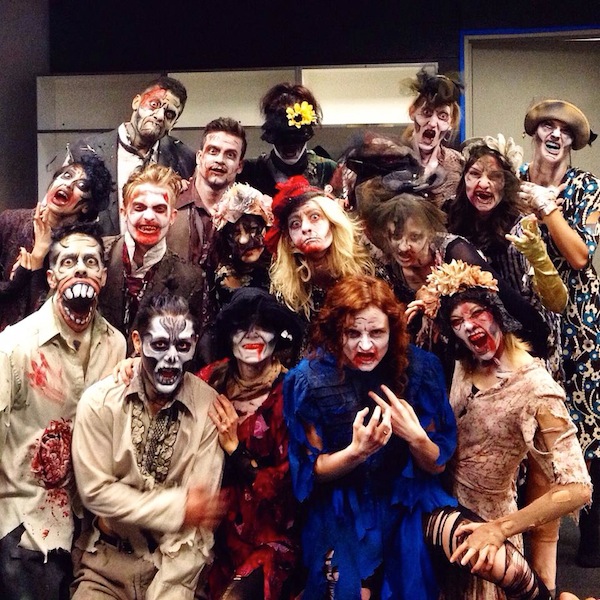 Odyssey Dance Theatre’s “Thriller” is nothing like Michael Jackson’s hit music video. The Halloween haunt turned to a comedic dance show is now at Provo’s Covey Center for the Arts. (Photo courtesy Facebook)

It’s Friday the 13th. Do you dare try out some of Utah Valley’s Halloween haunts during the spookiest day of the year? Don’t worry — not all of the haunts are the top of the scream factor, but some of them are.

As “darkness falls across the land” Odyssey Dance Theatre has made it’s way to Provo for the annual Halloween haunt, “Thriller.” Prepare to cry (with laughter) as classic Halloween stories are turned to comedies in technically stunning dances. But be alert before the show begins and at intermission — the zombies will get you!

The infamous clown IT has found a new home in American Fork. Step into a horror movie that you can’t pause. The high-tech effects, cutting-edge animatronics, innovative lighting, wicked sounds and sinister misfits will haunt your nightmares for weeks.

A horticulturalist crossbreed accident has McCoard’s Garden Center in Provo begging for Utah Valley resident’s help to save the researchers turned zombies. By shooting paintballs laced with anti-viral treatments at these zombies, you can help McCoard save its researchers. This haunt is so not scary that even a two-year-old would enjoy it.

Head to Cornbelly’s, but instead of strolling through the adorable superhero-themed maze, take a walk through their haunted house.

Provo is cycling up its own kind of fear by taking to the streets on bicycles and learning the city’s horror stories. Two different routes are available, one on Friday nights and one on Saturday nights, which means double the scare. All stories are true, and riders will never look at Provo the same again. Get ready for some spooks and spokes.

Into the wood onto the longest trail yet for the Haunted Forest. Encounter the monsters in the forest and try not to scream. Can you handle the intensity?

Do you have a Utah Valley event you want to add to the calendar? Email us at news@utahvalley360.com.

BYU volleyball looks to distance themselves from Gonzaga Previous post