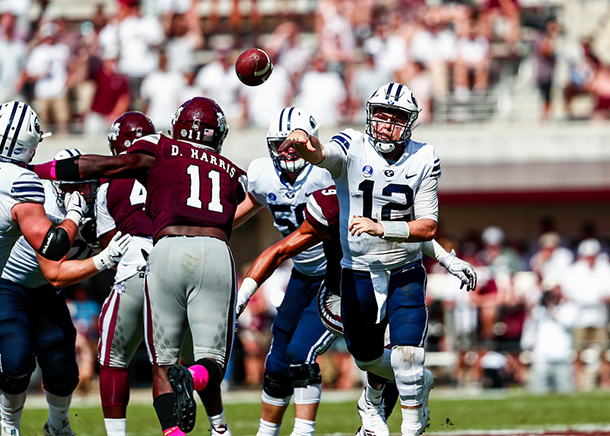 If you were as busy as the Cougars and Wolverines were this weekend, chances are you didn’t get to catch all the action. Here’s a recap of how it all went down.

The BYU football team lost again — this time 35–10 against Mississippi State. After winning their season opener, the Cougars have now dropped six straight.

The Bulldogs gained 546 total offensive yards compared to BYU’s 176. Sophomore defensive back Dayan Ghanwoloku did snatch two interceptions and junior kicker Andrew Mikkelsen forced a fumble, but the Cougars weren’t able to capitalize. After intercepting Mississippi State’s quarterback in the end zone, Ghanwoloku returned the ball 67 yards. But only moments later BYU fumbled and the Bulldogs’ drive ended in a touchdown to put them up 14–0. Ghanwoloku’s second interception did result in an offensive BYU touchdown cutting the deficit to 28–10 near the end of the third quarter. Mikkelsen forced a fumble on the following Mississippi State’s kickoff return putting the Cougars inside the 30-yard line, but Tanner Mangum was then intercepted in the end zone. The Bulldogs went on to score one more touchdown, resulting in the 35–10 final score.

“There were some positives but not enough,” BYU head coach Kalani Sitake said. “If it did not feel like our backs are up against a wall before, it does now. We head east next week and we have to be ready for East Carolina. Hopefully we can get things fixed and perform better by then.”

BYU’s 1–6 record marks their worst start to a season in nearly 50 years. The last time the Cougars lost six straight was in 1968. With just six games remaining, BYU needs to win out to avoid a losing season record and to be bowl-game eligible.

The Cougars will face East Carolina on the road on Saturday, Oct. 21 looking to earn just their second win of the season.

“I thought we served really well today and that helped us get some great touches on the block,” BYU head coach Heather Olmstead said. “Gonzaga made some changes in the second set and we had to show some fight, which was awesome to see. For the second match in a row we passed well. I’m really proud of the improvement there.”

The win keeps them perfect in conference play at 8–0 as well as takes them to 19–1 on the year.

The Cougars will look to remain perfect in conference play as they travel to California this week to take on Pepperdine on Thursday, Oct. 19 and then Loyola Marymount on Saturday.

It was a great weekend at The Fieldhouse 🙌🏼#GoCougs #BYUWVB pic.twitter.com/G3xvCGnUxH

“I was very happy with our effort and the way that the girls were able to come back and respond there in the second set,” UVU head coach Sam Atoa said. “We had several girls that showed up big for us today.”

Overall, the Wolverines outhit the Kangaroos .288 to .135 and outblock them 12 to five.

UVU now heads home for a three-game homestand. First up is Seattle U on Saturday, Oct. 21.

Thanks to an overtime goal by sophomore midfielder Breanna DeWaal, the UVU women’s soccer team beat UT Rio Grande Valley 2–1 on Saturday. The victory extends their win streak to three games and puts them at 7–10 on the year and 3–1 in conference play.

“We’ve been in overtime a number of times this season,” said UVU head coach Chris Lemay. “I thought we came out hungry in OT to win the game. It was an awesome finish by Bre DeWaal. We felt like we put a lot of pressure on them. To capitalize and reap the reward is something we’re very excited about.”

The Wolverines got on the board first with a goal from senior forward Tori Smith in the 17th minute but UTRGV was able to tie it in the 83rd minute sending the game to overtime. DeWaal ended the game with the winning goal in the 97th minute. As a team, UVU outshot UTRGV 19–7.

The Wolverines will look for two more wins this weekend. First, at home on Friday, Oct. 20 against Grand Canyon and then on the road on Sunday against CSU Bakersfield.

After trailing early on, the UVU men’s soccer team fought back to a 1–1 tie against Air Force on Saturday night.

The Falcons scored in just the fourteenth minute but senior midfielder Paul Hoffmeister scored the equalizer for the Wolverines in the 43rd minute. The two teams battled through the second half and two overtimes without any more scoring, resulting in the 1-1 draw.

“It was an important point for this team tonight as we continue the final stretch in WAC play,” UVU head coach Greg Maas said. “I was very impressed with our resiliency and ability to stay focused after conceding a goal. We responded with a fantastic goal which really set the tone for the remainder of the game. Overall, I thought tonight was a very mature game between two very good teams.”

With the tie, UVU moved to 4–8–2 on the season and 1–3–2 in conference play. As the season winds down, the Wolverines only have two home games left. The first of the two will be on Thursday, Oct. 19 against Houston Baptist.

MSOC | GOAL Paul Hoffmeister! 43′ and game is tied at 1-1 at the half. #GoUVU #WACmsoc #AsOne pic.twitter.com/REkGRFtpuC