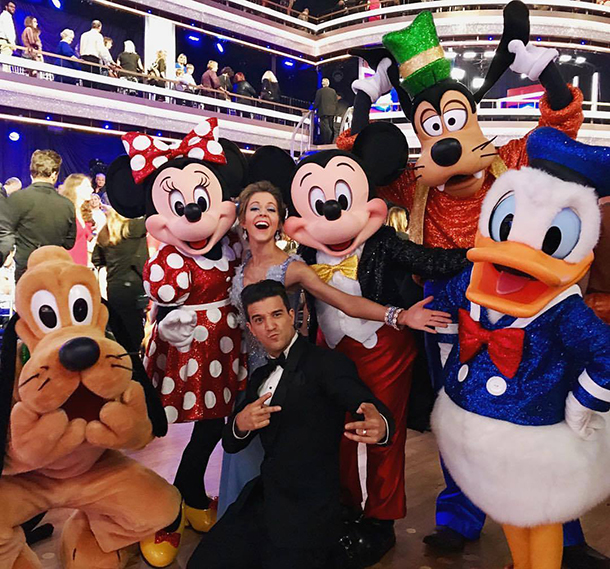 Violinist Lindsey Stirling and professional dance partner Mark Ballas pose for a photo with Mickey Mouse and the gang during Disney Night on “Dancing With the Stars.” (Photo courtesy of Lindsey Stirling’s Facebook)

Violinist Lindsey Stirling showed off her elegant side during her performance on “Dancing With the Stars” Monday night.

“I think what I love most about that is this week was you didn’t go quirky,” said judge Carrie Ann Anaba. “Every week you’ve brought a little quirk, artistry. This was classic. This was stunning. It was such a transformation for you, and I know it actually took a lot more courage to do this number because you had nothing to hide behind, no character, no artistry, just beautiful, incredible dancing with one of the most finest holds I’ve ever seen.”

After an emotional dance last week, Stirling took a turn on the lighter side with an elegant Foxtrot to an instrumental version of “When You Wish Upon a Star.”

“The essence of what this song is about is your dreams can come true,” Stirling said. “I remember when I was a struggling artist and I was being told that I would never succeed, I was inspired by the Walt Disney story. Everyone told him he was a failure, and yet he didn’t give up, so I didn’t either.”

One of Stirling’s dreams was granted Monday night when judge Len Goodman awarded Stirling and partner Mark Ballas a 10 for their performance.

“I loved the way how every nuance in the music was transcribed into the movement that you used,” Goodman critiqued.

Overall, the duo earned a 28 out of 30, a score high enough to land them in third place behind actor Jordan Fisher and professional dancer Lindsay Arnold’s perfect score of 30, and a mere point behind actor Frankie Muniz and his partner Witney Carson’s 29.

“Pretty Little Liars” actress Sasha Pieterse and her professional partner Gleb Savchenko were eliminated at the end of the night.

In 2015, Stirling received her degree in recreation management from BYU. A classically trained violinist from Gilbert, Arizona, Stirling earned her way to fame through her YouTube channel. The BYU graduate has a unique style of music that blends pop and violin — and it is all accomplished while she dances.’

“Dancing With the Stars” returns on Monday, Oct. 23 at 7 p.m. with another live show and elimination.