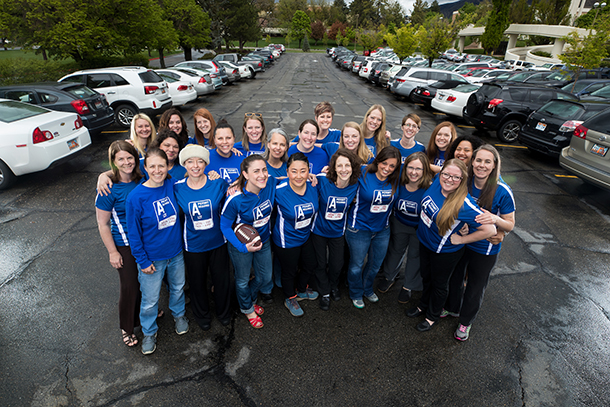 BYU female professors form a flag football team that calls themselves the “A Lot.” (Photo by Jaren Wilkey/BYU Photo)

During the day, a group of female professors spend time on their home turf — the classroom — teaching BYU students in a variety of subjects. At night, the professors at Brigham Young University take a break from their textbooks to play on a new field, an intramural field to be exact.

When Sarah Olson Brinton was a grad student at the University of Texas, she told her roommate her dream was to one day teach at BYU and start an all-women’s faculty flag football team. That dream became a reality in 2011 when “A Lot” first took to the field.

The team name references the professors’ prime parking privileges — a humorous jab at students who struggle to find parking on the privately owned university’s campus.

“Our cheer at the end of the game is, ‘great parking always wins,’ because we may not have won the football game, but we know when we come to campus that we can park closer than the students can,” said Jessica Preece, a political scientist and running back in the video.

“Our cheer at the end of the game is, ‘great parking always wins,’ because we may not have won the football game, but we know when we come to campus that we can park closer than the students can.” — Jessica Preece, a political scientist

These on-field camaraderies have translated into the professors’ work as they have teamed up for off-field research in their individual areas of expertise.

“I remember going to Kneaders after a game and talking with a couple teammates about my research with Indian tribes,” said law professor Michalyn Steele. “That lent itself to a discussion of a paper that we ended up writing and publishing together.”

And they’ve also seen their night-life as football players bring them more respect in the classroom.

“We think it’s really important for our female students to see a little bit more of our lives and see us as more well-rounded people and give them an idea of what their life can look like as they move forward,” Preece said. “And not all of them are going to make the same choices we have, but we think it’s important for them to see these options and see the variety of things that adult women can do with their lives.”

The Voice of the Cougars, Greg Wrubell, narrates the nearly six-minute video and concludes it by calling the A Lot’s touchdown play. Read more about the A Lot on news.byu.edu.

BYU football: Nothing left to do but win Previous post

Orem sets sights on The Cheesecake Factory Next post