3 ways to fix the BYU offense 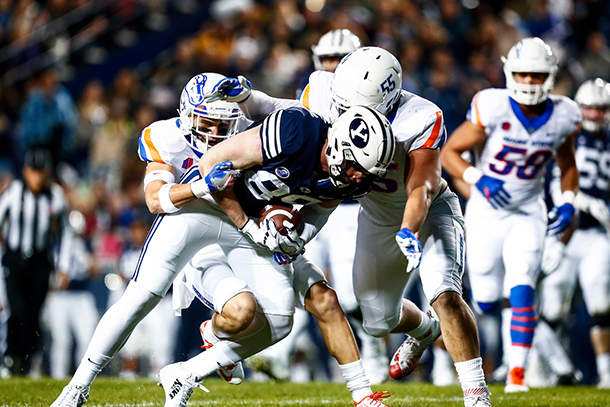 A broken offense has left BYU’s season in shambles.

The Cougars (1–6) are off to their worst start since 1968. Five of those six losses have occurred by double digit margins. They face a real possibility of missing a bowl game for the first time since 2004.

Offensive ineptitude is a major reason for it. Through seven games, BYU ranks 129th nationally in total offense (242.4 yards per game) and scoring offense (11.4 points per game). Only one FBS team ranks below the Cougars in either category. BYU is dead last in first downs per game (11.9).

“We see effort every week, but we’ve got to play smarter and do things the way they’re coached,” BYU offensive coordinator Ty Detmer said. “Right now, it’s not showing up on game day with what we’re coached to do and how we do it in practice. That’s the frustrating part for coaches. We’ve got to coach it better and we’ve got to rep it more if they’re not quite getting it. It looks good in practice and then you get in the game and it’s different.”

BYU’s schedule lightens up considerably over the second half of the season, starting with East Carolina on Saturday. The Pirates (1–6) are last among FBS teams in total defense (600 ypg) and scoring defense (50 ppg). Upcoming opponents San Jose State, UNLV, Massachusetts and Hawaii also rank near the bottom in several key defensive categories nationally.

Ultimately, these opponents may only mask larger problems at play for BYU. The Cougars must make some long-term critical fixes ahead of the 2018 season to put the offense back on track.

Once he came aboard with Kalani Sitake as BYU’s offensive coordinator, Detmer ditched the spread offense that Bronco Mendenhall used. He replaced it with a pro-style scheme designed to resemble the offense that the Cougars ran under LaVell Edwards.

His decision didn’t account for the fact that many offensive players currently on BYU’s roster were recruited to run a spread offense. The Cougars utilized smaller and leaner offensive linemen, lacked quality depth at tight end and had quarterbacks better suited to making quick reads and playing at a no-huddle fast tempo. Huddling up and going under center slowed the tempo considerably, making it easier for opponents to stop drives after a handful of plays.

Injuries have also taken their toll and forced Detmer to deviate to some extent from what he introduced in fall camp. Tanner Mangum, for example, has worked out of a shotgun formation regularly since returning from an ankle injury because of limited mobility.

Adjusting the offense to fit the skills of the current roster should have been done before injuries forced changes. It will take time for BYU to fill the roster with recruits more suited to running a pro-style offense. Adapting the playbook to fit the current roster’s skill level is smarter than trying to impose a preferred playing style at all costs.

Play calling also needs to be less predictable. Defenders are able to read routes and break up passes or snag interceptions with ease. It has led to a severe lack of production in the passing game. BYU has totaled less than 200 passing yards against 13 straight FBS opponents, dating back to last season’s 55–53 win over Toledo. 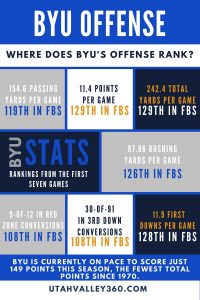 BYU is currently on pace to score just 149 points this season, the fewest total points since 1970. Here’s a closer look at the staggering offensive numbers for the Cougars through seven games.(Infograph by UtahValley360.com)

Life without Jamaal Williams and Taysom Hill hurt BYU’s offense much more than expected. The duo covered up major flaws with their running abilities. They found ways to turn broken plays into positive yardage and keep the chains moving.

Running the ball is not a strength for BYU this season. The Cougars are producing just 87.86 yards per game on the ground, which ranks 126th nationally.

If BYU wants the passing game to open up, the run game needs to become an actual threat again.

Poor run blocking has been one factor behind the struggles. Gaps and seams for the running backs to hit are not being developed with any consistency. Ball security is also a major issue. The Cougars have lost four fumbles in the last three games. That’s more fumbles than Williams lost during his entire BYU career.

Inexperience is turning out to be a major problem for the offensive coaches.

This is the first college coaching job for both Detmer and running backs coach Reno Mahe. Offensive line coach Mike Empey had not coached at the collegiate level for a decade before returning to BYU. Wide receivers coach Ben Cahoon’s only previous experience came from a failed two-year stint with the Cougars in 2011-12. Only tight ends coach Steve Clark has any significant collegiate coaching experience outside of Provo.

Mangum deflected blame away from the coaching staff for BYU’s offensive struggles. He said the players believe they haven’t done enough on their part to make the offense work.

Shaking up the staff is still a solution Sitake should consider. At a minimum, he should add position coaches who possess greater experience with developing offensive players so he can get more out of his roster.

Bringing in a new offensive coordinator may be another necessary step for the Cougars to progress. This means demoting, or even firing, Detmer and replacing him with a play caller who is better at making in-game and in-season adjustments. Such a measure may be critical for Sitake’s own long-term job security at BYU.