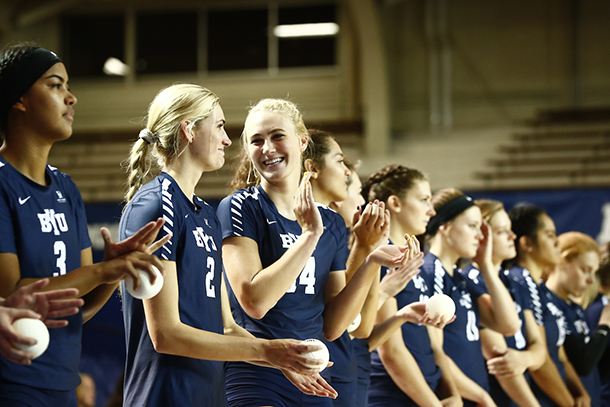 The BYU women’s volleyball team is 10–0 in the West Coast Conference. (Photo by BYU Photo)

The BYU football team lost their seventh straight game — this time 33–17 against East Carolina on Saturday. The loss drops them to 1–7 on the year and ends their hopes of reaching a bowl game this year.

The Cougars did record a season-high 421 total offensive yards, but it wasn’t enough to beat the Pirates.

“We had some good moments and we had some positive yards but the scoreboard doesn’t indicate a lot of the positive things we saw,” BYU head coach Kalani Sitake said. “Now we have to rally back and find a way to keep playing and keep competing and work for the seniors for the rest of the season.”

Thanks to a forced fumble by defensive back Zayne Anderson, the Cougars took a 7–0 lead midway through the first quarter but quickly fell behind 10–7. BYU fought back with a 21-yard field goal by Rhett Almond to even the score heading into halftime. The Pirates then scored three field goals in the third quarter followed by a touchdown minutes into the fourth quarter to increase their lead to 26–10. On their next possession, the Cougars marched all the way down to the Pirate’s four-yard line but turned the ball over on downs. Tanner Mangum was then intercepted on the following BYU possession that led to another East Carolina touchdown. Down 23 points with just a few minutes left in the game, Mangum connected with freshman tight end Matt Bushman on a 12-yard pass for Bushman’s first career touchdown and resulting in the final score of 33–17.

A nice start for @BYUfootball!

They jump on ECU. pic.twitter.com/FPG36UOBAg

Mangum went 26 for 41 with 319 yards, two touchdowns and one interception on the game.

The Cougars are now guaranteed to finish the season with a losing record. They will return to Provo looking for just their second win as they take on San Jose State on Saturday, Oct. 28.

Jones-Perry’s record-setting 34 kills came on a .441 clip. She also contributed with six digs and three aces. Sophomore outside hitter McKenna Miller had 12 kills of her own while senior middle blocker Cosy Burnett added 10 blocks.

“I thought we made some nice adjustments after the second set,” BYU head coach Heather Olmstead said. “Our serving got tougher, our passing got better and we played some great defense. The one constant throughout the match was Roni (Jones-Perry). She took some big-time swings and brought great energy. I’m proud of the team for battling back. It’s not easy to do on the road but they were resilient.”

The Cougars will face San Diego at home this Friday, Oct. 27 in a battle between the first and second place WCC teams.

In their fourth overtime game of the season, the BYU women’s soccer match ended in a 0–0 tie with Loyola Marymount University on Saturday. Both team’s offenses struggled. At the end of the night, BYU outshot Loyola Marymount 29–12, but nobody was able to find the back of the net.

“The results haven’t gone our way this year, but we have played some amazing soccer,” BYU head coach Jennifer Rockwood said. “The girls gave it everything they had tonight and did an amazing job. Everything was so close even up to the last second.”

The tie put BYU at 5–6–4 on the year and 2–2–1 in conference play. The Cougars will hit the road to face Gonzaga on Thursday, Oct. 26 and then Portland on Saturday.

“I felt like we gave ourselves some chances as far as passing goes, but we just didn’t do a very good job taking care of the ball or running our offense,” UVU head coach Sam Atoa said. “You’ve got to hand it to (Seattle University). They did a much better job defensively at the net against us. We just have to get better.”

In the loss, senior middle blocker Madison Dennison recorded a double-double with 10 kills and 10 blocks while sophomore right side hitter Izzie Hinton contributed with 11 kills and a career-high six blocks.

The Wolverines have two home games this week. The first against CSU Bakersfield on Thursday, Oct. 26, and the second on Saturday against Grand Canyon.

Thanks to a 74th minute goal by sophomore midfielder Breanna DeWaal, the UVU women’s soccer team beat Grand Canyon 1–0 in their home finale on Friday night. The team then traveled to California to face CSU Bakersfield where they won again with a score of 1–0 thanks to another goal from DeWaal in the second half.

“We found a way to win today at a tough place to play ,” UVU head coach Chris Lemay said. “They put a lot of pressure on us and we weathered the storm.”

With the victory, the Wolverines improved to  9–10 on the year and 5–1 in conference play. The team is also on a five game win streak with just one regular season game to play against Seattle University on Saturday before the WAC Tournament begins on Nov. 1.

“Mathematically it’s over,” Lemay said. “We set out this season to get a bye at the WAC Tournament and we’ve checked that one off our list. Now, we want to go to Seattle and finish this season off at 10–10, not 9–11. A 10-win season is another goal we would like to check off our list.”