Walk through a real-life, real-live broadcast of BYU Sports Nation 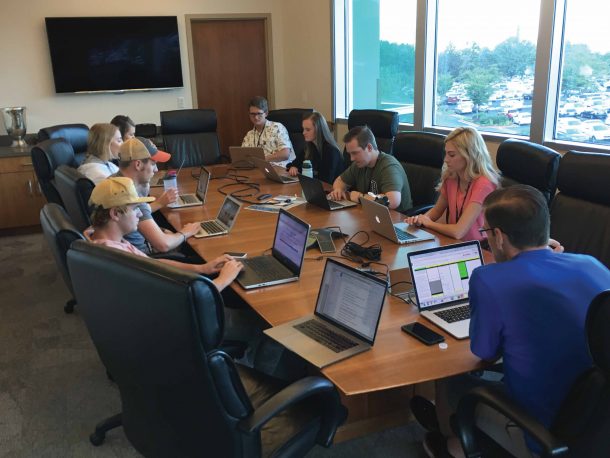 7:29 a.m. Eight student employees and producer Ben Bagley meet around a second-story conference room and start swapping headlines while they flesh out a Google doc for the 10 a.m. show. “Did you see they made LaVell coasters?” “I’m working on the Ravens story.”

7:40 a.m. Ben Bagley says, “The obvious headline isn’t in yet. C’mon guys!” “Nice job on the Arden Key headline.” “OK, so far you’re pitching me BYU football, NFL, soccer and then volleyball or PGA. What does everybody think?” “We’ve got the video of Sitake where he played close to the vest on Francis Bernard’s redshirt. I want to see the video and not just the audio soundbite on that one.” “The Fred Warner two-on-one needs to be edited.”

7:56 a.m. Ben says, “Any more questions? Giddyup!” The students leave and Ben stays in the room, with his phone lighting up with texts and notifications. 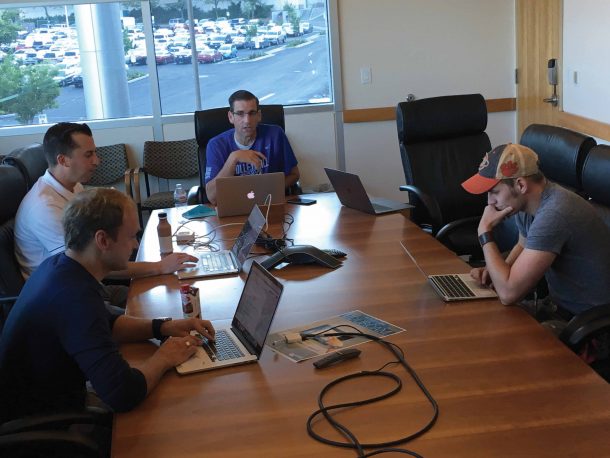 8:14 a.m. Hosts Spencer Linton and Jarom Jordan come in the room with their laptops covered with BYUradio decals. Before jumping into work, they chat about their morning of church basketball, where Jarom had a minor “situation.” Also, Jarom says, “I’m glad I got a parking spot out there with Education Week prep going on!”

8:20 a.m. Spencer, Jarom and Ben review the ideas from the students and add their own. “Did you see that the Raiders’ Sean Smith got arrested for beating up his sister’s boyfriend on the 4th of July?” Spencer asks. “That’s better than beating up his sister!” Jarom responds.

8:30 a.m. “OK, we’ve also got the untelevised blue-and-white game tomorrow. I’m excited to drop lines nobody will hear. ‘If they play like that, BYU WILL will the national championship!’” Jarom laughs.

8:50 a.m. Ben gets Spencer and Jarom back on track as they switch from topics of church ball (again), to baptisms, to the Young Men’s group they spoke to the other night.

8:54 a.m. Spencer says, “Reddit just retweeted the Pac-12 as automobiles!” (laughing) Jarom adds, “Let’s pocket that for next year. We can do our opponents in cars. Or food. Or movies. Or bands. What group would LSU be?” 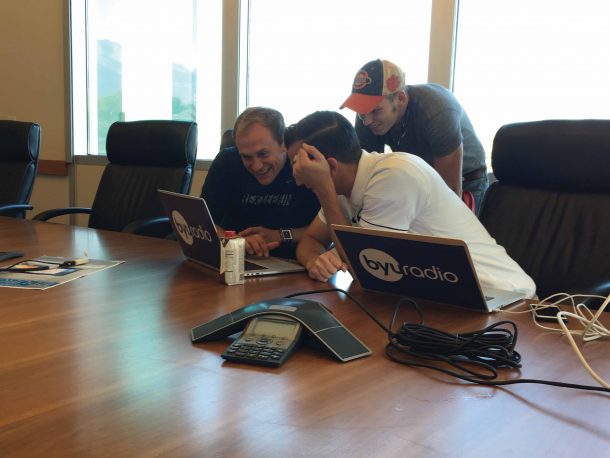 9:13 a.m. Spencer and Jarom get distracted by YouTube and Twitter as they finalize the outline for today’s show. 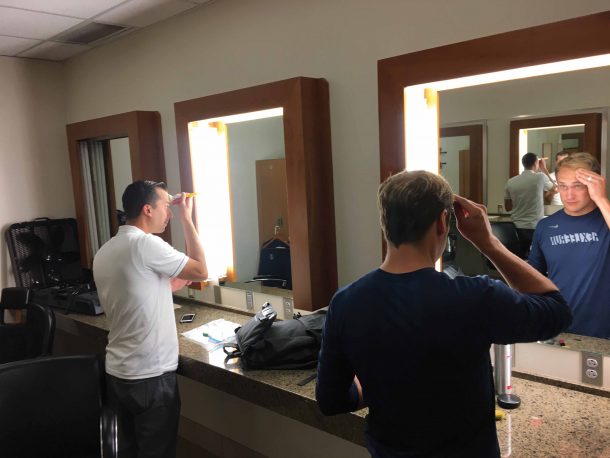 9:30 a.m. Spencer and Jarom apply their own makeup down the hall from Studio B.

9:41 a.m. Spencer and Jarom walk into the studio where they bump elbows and power handshake crew members.

9:55 a.m. The hosts record a radio spot and then a Snapchat post.

9:58 a.m. Spencer rants about how baseball has extra innings. “Just pitch it already! What if football had no clock and you just snapped it whenever you felt like it?” 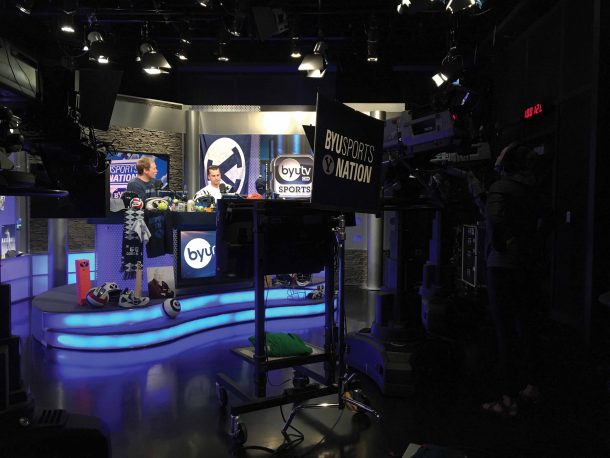 10:00 a.m. BYU SportsNation goes live and the morning preparation is on display as the hosts banter confidently about stats, tweets and predictions. 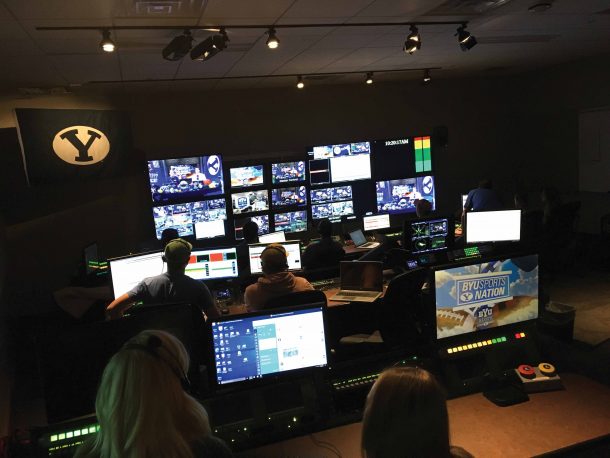 10:05 a.m. Ben quarterbacks the show with a dozen people in the control room.

10:41 a.m. Ben gets the LSU sideline reporter on the phone for a live segment. Ben paces throughout the show. “My feet are freezing by the end of this! We keep the room chilly so the equipment doesn’t overheat. I joke that they filmed the meat locker scene for Rocky in this building.” 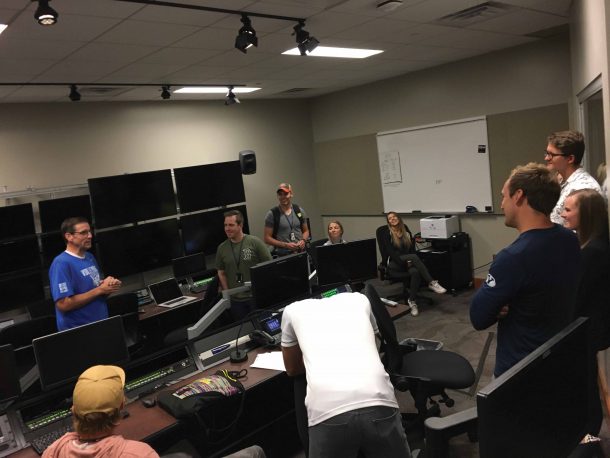 11:08 a.m. The post-show recap begins. “Thanks for a great show, everyone!” Ben says. “We did have some sloppy video transitions,” Jarom says. “And could we use a smaller font for the lower one-thirds?” 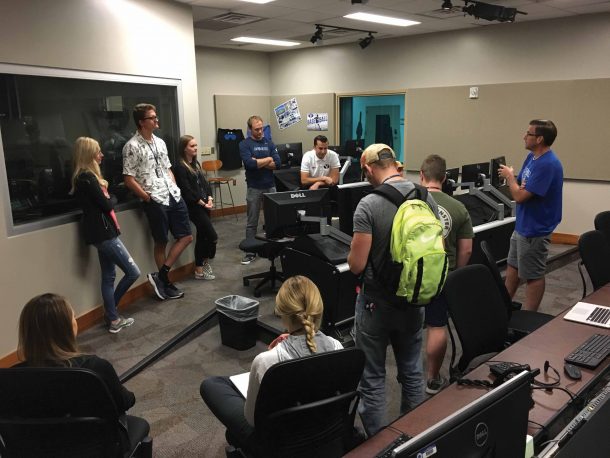 11:15 a.m. The team dismisses and research begins for the next broadcast.

Read the cover story on how Jarom and Spencer got started on BYU SportsNation here.

Orem ranked as No. 2 best city for trick-or-treating in 2017 Next post