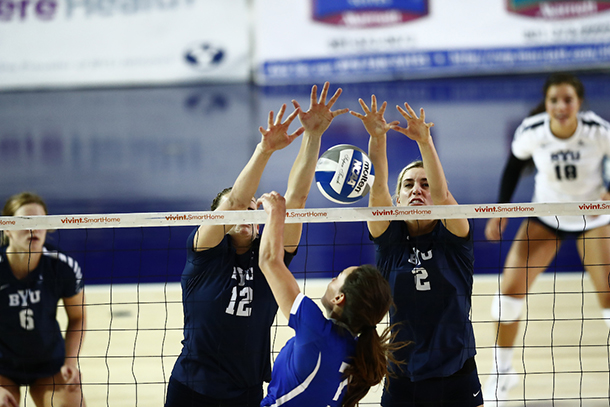 BYU junior Veronica Jones-Perry and senior Cosy Burnett go up for the block in a game at the Smith Fieldhouse. (Photo by BYU Photo)

With half of conference play in the books, the No. 8 BYU women’s volleyball team looks to take commanding control of first place in the West Coast Conference.

“Our biggest strength is our resiliency,” BYU head coach Heather Olmstead said. “You can see against LMU being down 0–2, they fight for every point.”

Now in their second round of conference matches, BYU is ready for their biggest game of the season thus far. The Cougars will take on the WCC second place team, No. 18 University of San Diego on Friday night in Provo. With a perfect 10–0 conference record and a stellar 21–1 overall record, BYU’s only loss came at the hand of Baylor in the Outrigger Resorts Volleyball Challenge in early September. They have been on a 13-game winning streak since then. Olmstead contributes the team’s success to the equal play from every member.

“(Everyone) plays for each other, they love each other and all of them are team players and willing to do whatever the team needs,” Olmstead said. “Each player steps up at a different time and that makes for a great team atmosphere.”

“We want to finish strong and we have some goals we want to accomplish and playing San Diego is one step closer to accomplishing our goals, so we’ll see what happens with that outcome.” — Heather Olmstead, BYU volleyball coach

The Toreros on the other hand hold an impressive 16–4 overall record and a 9–1 conference record. Their one conference blemish came against BYU who beat them in four sets at the end of September (25–23, 23–25, 25–20, 25–18). Besides the one loss, San Diego has dominated their competition winning 12 of their last 13 games and sweeping six of their last 10 opponents.

“San Diego is really good,” Olmstead said. “Offensively they’re a really good team. They’ve got some weapons that we’ll have to figure out how to stop. They’re a great defensive team as well as far as digging goes and blocking so we’re going to have to play some scrappy defense to match theirs. It’s exciting leading up to a great opponent. I think it’s going to be a great match.”

The two top WCC teams will meet in Provo to battle it out for first place. With only eight games remaining, the winner of the match will put themselves in a good position to remain on top of the conference.

“We want to finish strong and we have some goals we want to accomplish and playing San Diego is one step closer to accomplishing our goals, so we’ll see what happens with that outcome,” Olmstead said. “We’re looking forward to San Diego and, from there, we’ll take it one match at a time.”

The game is sure to be a tight and competitive one as the Cougars are 7–0 at home and the Toreros are 7–1 on the road this year. The two teams split the season series last year and BYU holds the slight edge in the series history having won eight out of 15 games.

The match begins at 7 p.m. on Friday night at the Smith Fieldhouse. Fans can watch the game on BYUtv or listen live on BYU Radio-Sirius XM 143.