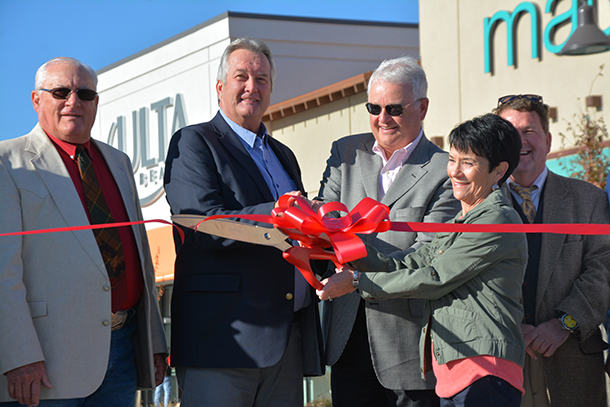 Ace Hardware, Famous Footwear, Petco, Maurices, TJ Maxx and Ulta have all opened their doors to customers. Downeast Home and Clothing will open on Friday, Nov. 3 with other businesses scheduled for opening later this year and early on in 2018.

“We have some wonderful tenants who have chosen to locate here,” said Randy Woodbury, president of Woodbury Corporation. “We hope the community will support them and be a part of their success and enjoy the services and offerings they provide.”

Canyon Creek — a 220-acre mixed-use development project located along Highway 6 at exit 257 off of I-15 — is a 245,000 square foot expansion project by Woodbury Corporation, WPI Enterprises and other partners. Eventually, the development with include a new Intermountain HealthCare hospital. 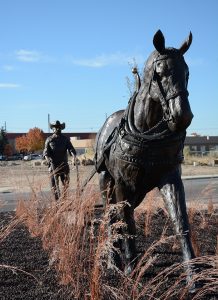 Local artist Jonathan Bronson pays homage to the early Spanish Fork settlers with a 25-foot long sculpture of a farmer with a plow horse. (Photo by Rebecca Lane/UV360)

During the ribbon cutting ceremony on Friday morning, Spanish Fork Mayor Steve Leifson reflected on Spanish Fork’s history and its early settlers, calling this area of the city a “wasteland” that was probably the same when the first settlers came to the city. At the same time, he credited those pioneers for building a foundation for the city to grow.

“The fortitude of those early pioneers, the toughness that they were here to settle the ground is amazing,” Leifson said. “They dug an irrigation system. They watered the ground and their orchards, and through their persistence and continuing to work hard, they laid the foundation for what we have here today in Spanish Fork.”

As part of the ribbon cutting ceremony, Spanish Fork unveiled an approximately 25-foot long sculpture of a farmer with a plow. The sculpture by local artist Jonathan Bronson pays homage to the city’s settlers.

“As I pulled in a while ago and saw that statue of the farmer and the horse and the plow, I thought back of my grandfather because he had a team of horses that he loved. He loved to work his field with those horses,” Leifson said. … “That statue just epitomizes what Spanish Fork’s all about. The heritage that we have here. The hard work.”

The Hanson family were some of those early pioneers that owned the land Canyon Creek now sits on. Scott Hansen, a partner with Woodbury Corporations, shared how his family had looked for the right developers for this land for a long time, but they struggled to find someone who “had the vision.” 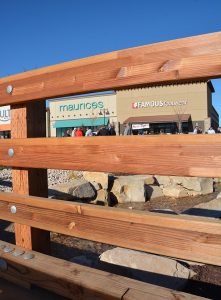 Canyon Creek is named for the creek that flows through the land, an important landscape feature for the early pioneers. (Photo by Rebecca Lane/UV360)

Leifson agreed, saying that Spanish Fork residents will no longer have to leave the city because the city will provide everything they need: entertainment, shopping, recreation, jobs and volunteerism.

“Spanish Fork is the home of pride and progress,” Leifson said. “Pride in our past, never forgetting our heritage. Progress for the future and always trying to do what’s best to develop and make our city a better city.”

Other opening dates for the Canyon Creek development include:

The movie theater’s goal is to open in time for the “Star Wars: The Last Jedi” premiere on Dec. 15.