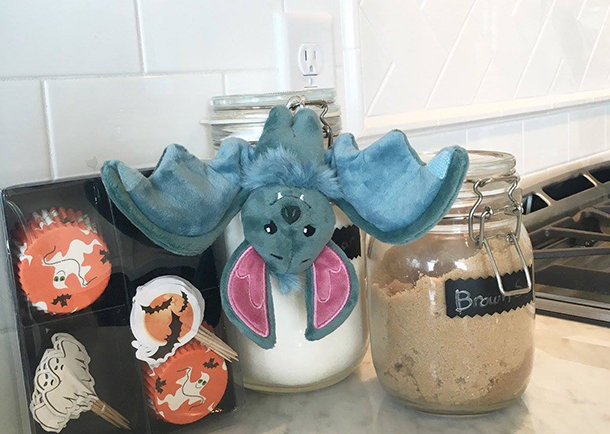 Boo is a mischievous plush bat with bendable ears and wings; he also has hooks on his feet for hanging upside down. He delivers tricks or treats every night leading up to Halloween, much like
the Christmas tradition of Elf on the Shelf. (Photo courtesy of Mindy Haering)

Mindy Haering was pregnant and excited for the arrival of her daughter, but that excitement turned to sadness when the Haerings lost their baby girl shortly before October in 2013.

While dealing with the loss herself, she was also worried for her 4-year-old son, who had also been excited to have a baby sister. She didn’t want him to focus on the sadness. So Boo was born.

Boo is a stuffed bat that creatively performed a mischievous trick or delivered a piece of candy to her son daily, much like the Christmas tradition Elf on the Shelf.

“It was a way to not only get him to focus on something else, but also so my husband and I wouldn’t dwell on the fact that this Halloween would be vastly different for us,” Haering said.

Haering chose a bat for the night-crawling creature because her son was dressing up as a bat for Halloween. The tradition took off in the Haering family and soon other families began to take note.

“We wanted to do it not only to honor the baby girl we lost but also to teach our son to give back.” — Mindy Haering, Sneek-A-Boo creator

After people continued to ask Haering about their tradition and request a bat for themselves, Haering found a designer to make an official Boo. A BYU student, who had landed a job with Disney pending graduation, helped create Boo. Inspired by Piglet from ‘Winnie the Pooh’ and Stitch, Boo came to life. As a bat, Boo can hang upside down with the help of small hooks on his feet. Then the plush bat has bendable wire ears and wings as well as velcro on the edge of his wings.

This friendly designed bat starting going home with paying customers in 2016 along with a Sneek-A-Boo set, which includes a cardboard home and a book, “Little Bat Boo,” which was illustrated by Utah artist Amanda Monson.

“We wanted to do it not only to honor the baby girl we lost but also to teach our son to give back,” Haering said.

So the Haerings decided not to keep any of the profits from Sneek-A-Boo.

“We have not profited from this business,” Haering said. “We make enough to pay our costs, marketing stuff with this and then we give it back.”

Instead, the Haerings choose a new organization each year to donate the proceeds — like with its first benefactor, the Shamba Foundation, which is an orphanage and school in Kenya. However, for its second year of operation, the Haerings decided to donate one Sneek-A-Boo set to Primary Children’s Hospital for every set purchased. So far this year, the family has delivered 200 plush Boos to the hospital. 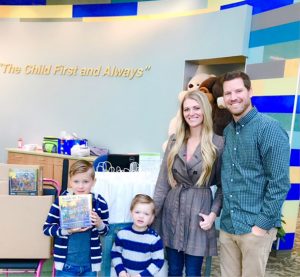 Mindy, accompanied by her husband JJ and two boys, delivered Sneek-A-Boo sets to Primary Children’s Hospital in Salt Lake City, Utah earlier in October. “There is so much work and effort, I needed there to be something more,” Mindy Haering said said about choosing to donate all the proceeds to an organization. “I needed something to show my kids the importance of giving back. I feel like every time you open up the news there are stories of bad things happening or money hungry companies, and I wanted to show my kids that we could do something good.” (Photo courtesy of Mindy Haering)

“It’s one thing to write a check, which is what we did with the Shamba Foundation, but to be able to physically give these kids something, it feels so good,” Haering explained. “It’s been so cool because the nurses can hang boo around the hospital, which they can’t go out trick-or-treating. We bring Halloween to the kids.”

And in the process, in sharing their infertility struggles and loss of their baby girl, the Haerings have built a community.

“A lot of people have wanted it either because they lost a child or because of infertility, because it is also Infertility Awareness Month,” Haering said. … “We are not alone. there are a lot of people out there that have been through horrible things like us. So we’ve created this thing through social media where moms can come together.”

“This little bat is so cute that they want to see what he does all year round,” Heaering said.

Sneek-A-Boos are currently on sale for $21.99 (normally $24) and available for purchase on amazon.com.