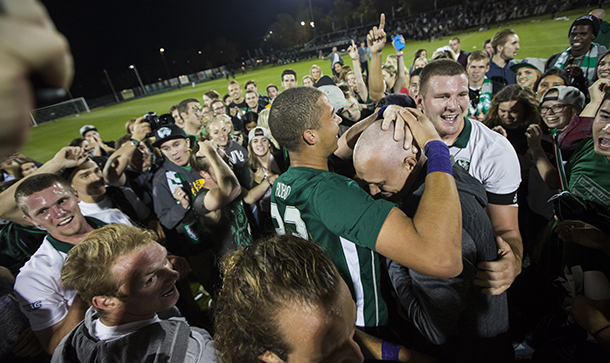 After being diagnosed with cancer, UVU junior Austin Buxton missed out on the 2016 soccer season. In this photo, Buxton’s teammates hug him after a game on Sept. 16, 2016. (Photo by August Miller, UVU Marketing)

UVU junior forward Austin Buxton headed the soccer ball off of a cross and into the open net to put the Wolverines up 2–0 and seal the victory over Houston Baptist on Oct. 19. The goal may seem like a routine soccer play, but it was Buxton’s first in nearly two years after redshirting the 2016 season due to cancer treatment.

Buxton was coming off an impressive 2015 sophomore campaign having recorded six goals on the season, the second most on the team. Nothing could stand in the way of Buxton having a big junior year for the Wolverines. That is until he discovered he had testicular cancer in February 2016. Buxton successfully underwent surgery to remove the cancer a few days later and was once again primed for another UVU soccer season. But the cancer returned just six months after removing it and a few days before the home opener, forcing Buxton to sit out the 2016 season to undergo chemotherapy treatments.

“It never really became reality,” Buxton said. “You hear those stories about cancer and people who go through these crazy treatments and that was all distant to me.” 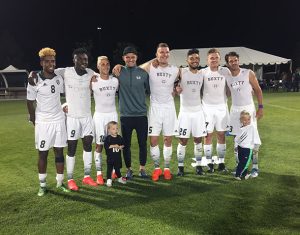 UVU’s soccer team made T-shirts to wear under their jerseys with Buxton’s name and number. (Photo courtesy of Austin Buxton)

Two days before the home opener against the then-20th ranked University of Washington, Buxton gathered his team on the field to inform them of the bitter news.

“It was an emotional experience for sure,” said Connor Salmon, one of Buxton’s closest friends and teammates. “He told us he wasn’t going to be able to continue forward with us performing on the field at least but that he would be with us in spirit. I can remember everyone immediately tearing up and just feeling heartbroken.”

Stunned by the news, Salmon rallied the team and prepared a surprise for Buxton during the match against Washington. After scoring the first goal of the game, Buxton’s teammates ran to the sidelines and lifted up their jerseys to reveal shirts with Buxton’s name and number surrounded by a heart.

“Knowing (Buxton) wasn’t going to be able to play was really hard for us,” Salmon said. “So we dedicated that game to him. At that point it was just us wanting to support him while he was fighting for his life.”

The devastating news propelled the team into upsetting the Huskies with a final score of 2–1.

A few weeks later, Salmon and several other members of the team shaved their heads to show their love for Buxton as he underwent chemotherapy.

“My teammates were huge in the way they handled it,” Buxton said. “They really picked me up. It was a pretty big deal. They were awesome about it.”

Buxton endured four rounds of chemotherapy but did his best to remain positive. He joined the team when he felt up to it and spent a lot of time with his then-girlfriend Lexi. Two months into his treatments, Buxton proposed.

“Easily the hardest part was watching my team play without me. Watching them do their thing and not being able to help them while they were struggling and not be a part of their successes, that was the hardest thing.” — Austin Buxton, UVU soccer forward

Austin Buxton continued his treatments throughout the season. Although the chemo was extremely physically challenging, that wasn’t the most difficult part for him.

“Easily the hardest part was watching my team play without me,” he said. “Watching them do their thing and not being able to help them while they were struggling and not be a part of their successes, that was the hardest thing.”

But what Austin Buxton didn’t realize was how big a role he was actually playing in his team’s success.

“I think for us just to see his resiliency and such a positive attitude really helped us to have the season we did because we saw how hard he was fighting going through what he was,” Salmon said. 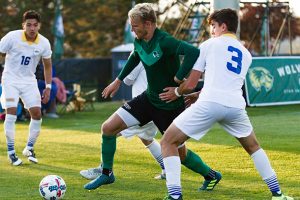 While the Wolverines finished the 2016 season as Western Athletic Conference Champions, Buxton achieved an even greater feat. He was pronounced cancer free on Nov. 4, 2016.

Two months later — in January 2017 — Austin and Lexi were married. For Lexi Buxton, the experience helped her to gain confidence in her relationship and in her companion.

“He was so positive through the whole thing,” Lexi Buxton said. “He never had one single complaint. I feel like at times I was struggling more than he was. He was the one that was helping me out and lifting me up. I admire that about him. It definitely made us a stronger couple.”

Nearly a year later, Buxton remains cancer free and is back on the field with his teammates to complete the junior season he missed out on.

“It’s been so much fun to be able to continue to be a part of it,” Buxton said. “I’m grateful every day that I get to be playing this game that I love.”