BYU women’s soccer season wraps up on the road 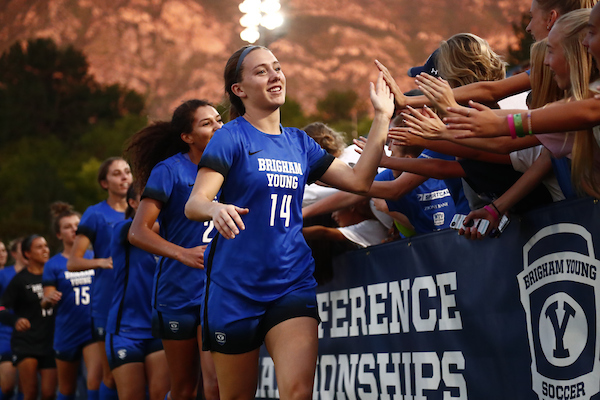 With the season coming to an end, the BYU women’s soccer team will miss the NCAA Tournament for the first time in six years.

With a 7–6–4 overall record and a 4–2–1 conference record, BYU currently sits in fourth place in the West Coast Conference behind first place Pepperdine (7–0–1), second place Santa Clara (6–1–0), and third place San Diego (6–1–0). Because the WCC doesn’t hold a conference tournament where BYU would have a chance to earn an automatic bid to the playoffs with a championship, the Cougars are headed into their final week of the 2017 season.

“It’s coming to an end probably sooner than we hoped and I know we’re a lot better team than our record shows,” BYU head coach Jennifer Rockwood said. “We’re  just wishing we had a couple more games where we had an opportunity to get our RPI up to potentially be an at-large bid (in the NCAA Tournament).”

Despite the disappointment, the team will try to end the year on a four-game win streak. Coming off of two road wins — one against Gonzaga with a score of 6–3 on Thursday, Oct. 26, and a 1–0 win over Portland on Saturday, Oct. 28 — the team will travel to California for their final two games. They first face San Francisco on Thursday, Nov. 2.

“San Francisco has had some ups and downs, similar to us,” Rockwood said. “But at home they’re always going to get their best shot and it’s the last weekend, so we’re all just trying to finish really strong.”

With a 6–10–2 overall record and a 2–5 conference record, the Dons are coming off a 2–0 loss against Santa Clara. Most recently in the series history, BYU beat San Francisco in Provo last season with a 4–0 score. The Cougars lead 6–1 all-time and will look to add one more win to that record on Thursday.

“It’s coming to an end probably sooner than we hoped and I know we’re a lot better team than our record shows. We’re  just wishing we had a couple more games where we had an opportunity to get our RPI up to potentially be an at-large bid (in the NCAA Tournament).” — Jennifer Rockwood, BYU soccer coach

After their battle with the Dons, BYU will take on Santa Clara in their final game on Saturday, Nov. 4.

“Santa Clara is playing for an NCAA playoff berth and so they’re always tough,” Rockwood said. “We’ve never actually beaten Santa Clara at their place so for us we want to end as strong as we can.”

The only win for the Cougars over the Broncos came in 2014 in Provo with a score of 5–2. The last meeting in Santa Clara was a 0–0 tie in 2015 and BYU is 1–6–4 against Santa Clara overall. The Broncos will face San Diego on Thursday bringing a 6–1 conference record with them before playing the Cougars on Saturday.

Although BYU will miss the playoffs this year, the team is still looking to finish the season strong.

“Beating teams like San Francisco and Santa Clara on the road is certainly a goal of ours,” Rockwood said. “That’s what we expect to do, but we’re going to have to play some of our best soccer this season, but I think the girls are up for it.”

BYU vs. San Francisco will air on TheW.tv on Thursday, Nov. 2 at 8 p.m. Fans can also listen on BYU Radio-Sirius XM 143 or ESPN 960 AM. Saturday’s game against Santa Clara will also be aired on TheW.tv and can also be heard on BYU or ESPN radio.