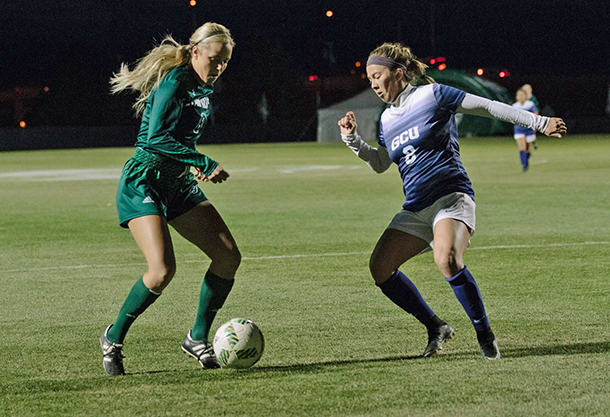 The UVU women’s soccer team earned a No. 2 seed for the WAC Tournament.
(Photo by UVU Photo)

Finishing the season with a 9–11 overall record and a 5–2 conference record, the UVU women’s soccer team secured the second seed in this year’s Western Athletic Conference Tournament.

Having started the season 4–9, the Wolverines bounced back in a big way in conference play. After losing the first WAC game to Kansas City, the team knocked off five conference foes in a row including Chicago State, New Mexico State, UT Rio Grande Valley, Grand Canyon and CSU Bakersfield. Three of those five games were shutouts and one was an overtime victory.

However, UVU lost 2–0 to Seattle University in their final regular season game on Saturday, Oct. 28. Despite the setback, the Wolverines are positioned in second place behind only undefeated UMKC and earned a first-round bye in the upcoming WAC Tournament.

“We did well in regards to getting five wins (in conference play) but we were also humbled enough by a couple of results that didn’t go our way,” said UVU head coach Chris Lemay. “But I think we’re in a really good spot of being on that edge where we know we can do it but we’re susceptible enough that we’re not going to overlook any teams, and we’re not going to be overconfident.”

With the first-round bye, the Wolverines have had nearly a week to prepare for their semifinal matchup. Not knowing their opponent until Wednesday evening, Lemay said the team spent the majority of their practice time on ball retention and minimizing their turnovers.

“The best way to describe it is we’re hungry. I think the team is in a really good spot because we’re not by any means arrogant but we’re confident.” — Chris Lemay, UVU women’s soccer coach

“The focus has been on what we can do better and looking specifically at us and us alone,” Lemay said. “There are certain elements of our game — regardless of who we play — that if we do well it will benefit us.”

The Wolverines were WAC Champions in 2015 but lost in the second round of the tournament last year to Seattle University. This year, the team is looking to get back on top.

“The best way to describe it is we’re hungry,” Lemay said. “I think the team is in a really good spot because we’re not by any means arrogant but we’re confident.”

UVU’s quest for the WAC title begins on Friday, Nov. 3 against sixth-seeded Grand Canyon. GCU knocked off three-seeded UTRGV in a 2–1 overtime win on Wednesday night. It was just two weeks ago that UVU beat Grand Canyon 1–0 to secure their spot in the tournament and they hold a 6–3 all-time advantage over the Antelopes. The Wolverines head into the tournament focused and ready to go.

“We feel like if we put our best game together that we’ll have a good chance to be successful against anybody and I think that’s a good spot to be in,” Lemay said.

UVU will battle Grand Canyon on Friday, Nov. 3 at 8 p.m. in Phoenix, Arizona with a trip to the championship game on the line.