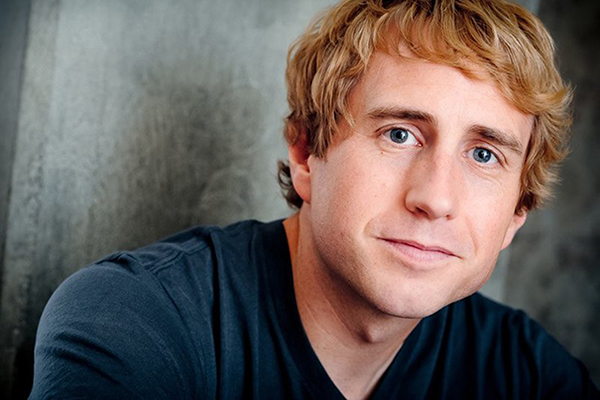 Kirby Heyborne is an LDS actor best known for his role as Elder Calhoun in “The Best Two Years.” (Photo courtesy kirbyheyborne.com)

You’ve seen him on television in an array of national commercials for companies like AT&T, La Quinta, Target, Best Buy, Jack In the Box, Wendy’s, Honda, Volkswagen, Liberty Mutual, Verizon and CarMax, to name a few.

You’ve seen him on the big screen in movies like “The Best Two Years,” “Saints and Soldiers” and “The Singles Ward.”

You’ve probably heard his music (the singer/songwriter has produced five folky/pop albums) and been entertained by his work as a comedian (he’s the co-founder and director of the Los Angeles-based improv group The Society).

As ubiquitous as Kirby Heyborne is, you may not realize that he’s also a renowned audio book narrator.

“When people find out I narrate audio books, they say, ‘You read and you get paid? Yes, I do. And I love it. That’s been an amazing career in and of itself.” — Kirby Heyborne, actor

“When people find out I narrate audio books, they say, ‘You read and you get paid?’” Heyborne said. “Yes, I do. And I love it. That’s been an amazing career in and of itself.”

The talented Heyborne has been the recipient of numerous Audio File Magazine’s Earphone awards for excellence in narration, with several nominations for the prestigious Audie Award. The American Library Association for young adult audiobooks recently gave Heyborne The Odyssey Award, its highest honor.

Publishers Weekly said of him, “Heyborne’s performance is both compelling and compassionate, and the audio is entertaining and highly rewarding.”

Heyborne also entertains in TV commercials. During last year’s NCAA basketball tournament, he appeared in an AT&T commercial with Dan Finnerty and Greg Gumbel as a parking booth attendant who wants to catch up on the tournament on his cell phone while Finnerty sings a parody of Aerosmith’s “I Don’t Want to Miss a Thing.”

Asked to name the spots that he’s been in, he lists about 20 before adding, “I can’t even remember them all.”

Being in so many commercials can have its drawbacks, too.

“I have had a commercial director cast me in three or four that he called me back for,” Heyborne said. “He said, ‘You’re my choice for everything. Then the client sees you and that you have five other national commercials, so I can’t use you for this.’ Being in a lot of commercials has stopped me from getting other commercials. He said, ‘You’re just in too many spots.’”

What is Heyborne’s appeal to companies that choose him?

“I try to be an example on set of someone who is positive and happy. Hopefully by the end they realize that crazy guy is one of those crazy Mormons.” — Kirby Heyborne, actor

While Heyborne possesses a likeable everyman persona, he’s certainly no average Joe when it comes to his prolific and critically acclaimed work.

While Heyborne would love to do more work in films, he enjoys anything he does.

“I love my job, whether it’s shooting commercials, doing voice over, narrating audio books or film,” he said. “I’m blessed to do this. It’s all acting and it’s all so fulfilling to me.”

Heyborne says his faith has helped him immensely in his chosen profession.

“I try to be an example on set of someone who is positive and happy. Hopefully by the end they realize that crazy guy is one of those crazy Mormons,” he said. “He’s happy and positive, has a beautiful family and he loves his wife and kids. That’s not normal. They say, ‘Oh, he’s Mormon?’ It helps me lead a happier life being Mormon.”