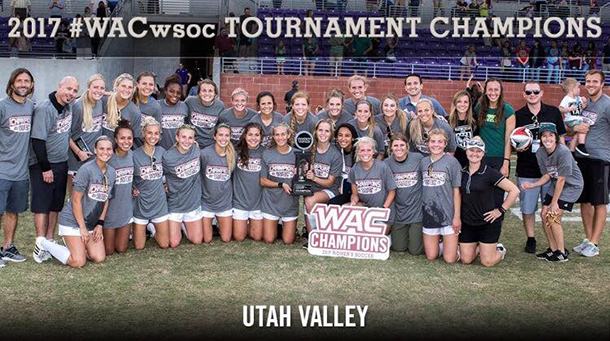 If you were as busy as the Cougars and Wolverines were this weekend, chances are you didn’t get to catch all of the games. Here’s a quick recap of how it all went down.

Down a goal in the second half, freshman midfielder Siri Dahl scored her first career UVU goal to tie the game. A 1–1 score remained through two overtimes and the championship was decided on penalty kicks. After sophomore goalie Brooklyn Nielsen forced three Redhawk misses, Breanna DeWaal, Libby Weber and Tori Smith went 3-for-3 to give the Wolverines the 3–1 penalty kick advantage and the win.

“This is hard to describe,” said UVU head coach Chris Lemay. “We’ve had some ups and downs over the course of the entire season but we always truly believed that we were capable of winning this championship. This is what we wanted and set out to do from day one and we went out and achieved it today. It feels unbelievable today. All the credit goes to our players for continuing to battle all year long. I’m extremely happy and proud.”

UVU receives an automatic bid to the NCAA Tournament with the victory. The team will find out their opponent on Monday, Nov. 6 and the game will take place next weekend.

Following their second win of the season, the BYU football team lost 20–13 to Fresno State on Saturday night. The Cougars fall to 2–8 on the year with the loss.

BYU went scoreless in the first quarter and found themselves down 10–0, but a pair of Rhett Almond field goals in the second quarter, including a career-high 46-yarder to close the half put the Cougars within reach down 10–6 at halftime. Following a Bulldog field goal, Squally Canada rushed four yards for a touchdown and Almond tied the game 13–13. Fresno State then took a 20–13 lead early in the fourth quarter. BYU had the ball with a chance to tie with over three minutes to go but a fumble gave possession back to the Bulldogs who then ran out the clock resulting in another loss for the Cougars.

Tanner Mangum went 20 for 33 with 163 yards before leaving with an injury late in the game. Mangum will miss the remaining three games of the season because of an Achilles tendon rupture. Beau Hoge then went 3 for 10 with 51 yards.

The Cougars will look for their third win of the season against UNLV on Friday, Nov. 10.

The BYU volleyball team earned their 23rd win of the season as they defeated Saint Mary’s in four sets (25–15, 25–18, 23–25, 25–18) on Saturday. The Cougars improve to 12–1 in conference play with the win and remain tied for first place in the West Coast Conference with San Diego.

“We had tough serving today,” BYU head coach Heather Olmstead said. “The team was really focused on serving our way and did a great job. Both Cosy (Burnett) and Kennedy (Redding) scored and blocked a bunch of balls, and I’m really proud of them. Everyone was ready to play and our energy was great.”

With a 23–2 overall record, the Cougars will look to remain dominant in conference play as they battle Gonzaga on Thursday, Nov. 9 and then Portland on Saturday, Nov. 11.

The BYU women’s soccer team fell short to Santa Clara in their final game of the season 4–3 on Saturday. The loss dropped the Cougars to an overall 4–4–1 conference record.

“We fought hard and made it exciting just like all of our games this season,” BYU head coach Jennifer Rockwood said. “We came out wanting to play one of our best games ever and score some goals, but our nemesis this year has been our set pieces defensively and that got the best of us today.”

Scoring in just the second minute of the game, senior forward Madie Lyons Mathews gave BYU an early lead, but Santa Clara was able to tie it only minutes later. Mathews put BYU back on top with another goal in the 24th minute but again Santa Clara evened the score. After falling behind the Broncos, freshman midfielder Mikayla Colohan tied the game 3–3 but a free kick minutes later provided the opportunity for Santa Clara to put the game away with a final score of 4–3.

The Cougars finish the season with a 7–8–4 overall record and will miss the NCAA Tournament for the first time in six years.

The UVU volleyball team lost in three straight sets to UT Rio Grande Valley on Saturday afternoon. With the loss, the Wolverines drop to 12–15 overall and 7–5 in conference play.

“I’m very disappointed. We are a much better team than we’ve been playing as of late,” said UVU head coach Sam Atoa. “Somehow we are not kind of figuring things out. We’ve got to get better, and it starts with me. We’ll be back and try to figure some things out. Because we are a good team, but we are just not performing at a consistent level that is needed to win.”

The Wolverines now find themselves in fourth place in the WAC behind New Mexico State, UTRGV and CSU Bakersfield. They will look to bounce back as they take on UMKC on Thursday, Nov. 9.

The UVU men’s soccer team lost 2–1 to Seattle University in their final game of the season on Saturday. The Wolverines finished the season 6–10–2 overall and 3–5–2 in conference play and will miss the Western Athletic Conference Tournament.

In his final game for UVU, senior forward Karson Payton scored the Wolverines lone goal but it wasn’t enough to beat the Redhawks. Payton is one of seven seniors who played their final collegiate game on Saturday including Chandler Baddley, Joe Barakat, Nic Harguindeguy, Paul Hoffmeister, Connor Salmon and Giovanny Vazquez.

“Tonight was about a courageous group of young men that took a chance four years ago to be part of history here at Utah Valley,” said UVU head coach Greg Maas. “Their combined accomplishments are nothing short of miraculous, and they will serve as the foundation for our program for many years to come. I couldn’t be more proud. Their contributions to our program, university and community have left an indelible mark that will never be forgotten.”