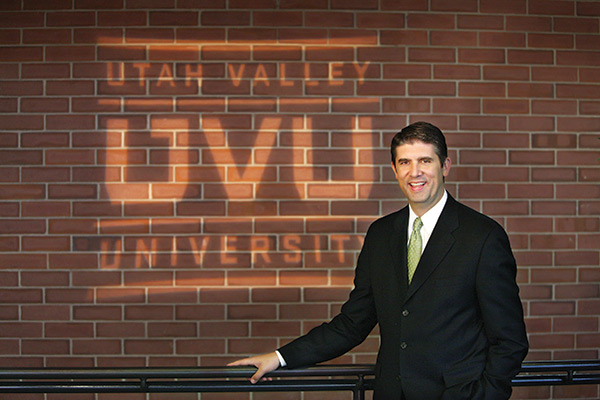 UVU President Matthew Holland will leave the university to serve as a LDS mission president in 2018.

Utah Valley University President Matthew Holland will leave the university in June to serve as a mission president for The Church of Jesus Christ of Latter-day Saints, UVU announced Monday morning.

Holland will continue to serve as UVU’s president through June 2018 before beginning his mission president duties in July. While the LDS Church announced Holland would preside over an English-speaking mission, the Church will not announce the specific location until later in the year.

“Serving at UVU during the past nine years has been a signal honor and daily joy,” Holland said in a press release. “The experience of building a thriving university around a community college has been one of the great causes in higher education and I couldn’t be more pleased about the impact this powerful, dual-mission model has had in making a quality, college degree more affordable, accessible, and relevant. At the same time, I absolutely cherish my faith and am so honored and grateful for this unexpected privilege to serve in this new ecclesiastical role.” 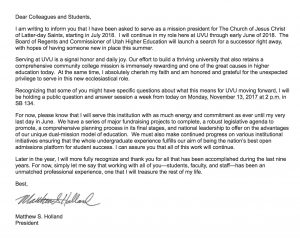 In a letter to UVU students, Holland told the students that the Board of Regents and Commissioner of Utah Higher Education will immediately begin its search for a new UVU president.

“Serving at UVU is a signal honor and daily joy,” Holland wrote in the letter. “Our effort to build a thriving university that also retains a comprehensive community college mission is immensely rewarding and one of the great causes in higher education today.  At the same time, I absolutely cherish my faith and am honored and grateful for the unexpected privilege to serve in this new ecclesiastical role.”

David L. Buhler, Utah Commissioner of Higher Education, said in a press release that the university will announce names of potential replacements in the near future.

“Matt has been a transformative president at Utah Valley University,” Buhler said. “The Board of Regents will commence a national search with the intention of having a new president named by June 2018.  Names of the search committee members will be announced in the near future.”

Holland was appointed the sixth president of Utah Valley University in 2009. During his time at UVU, President Holland saw the university rise to the largest university in Utah, with more than 37,000 students. During his tenure, academic offerings expanded to 44 certificate programs, 62 associate degrees, 84 bachelor degrees, three graduate certificates, and eight master degrees.

“Matt has been a transformative president at Utah Valley University,” said David L. Buhler, Utah Commissioner of Higher Education, in a press release. “The Board of Regents will commence a national search with the intention of having a new president named by June 2018.  Names of the search committee members will be announced in the near future.”

In the 2014 legislative session, UVU was awarded a $21 million new, ongoing funding to put UVU on a more equitable level with the other institutions in the Utah System of Higher Education. Also in 2014, UVU acquired 225 acres of land on the old Geneva Steel site in Vineyard. Holland worked with Tom Holdman to bring “Roots of Knowledge” — 80-panel, 60,000-piece Roots of Knowledge glass installation on the western wall of the UVU library — to campus. 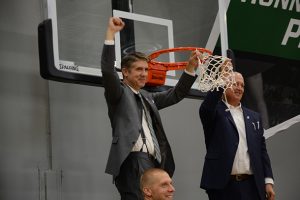 Holland was nationally recognized for instituting UVU’s dual-mission model of providing services of both an outstanding teaching university and a comprehensive community college.

“Matt Holland’s vision for engaged learning and student success has propelled UVU into the national and international spotlight,” said Elaine Dalton, chair, UVU Board of Trustees, in a press release. “His ability to work with people in a cooperative and synergistic way has garnered immense community support and trust. As a board of trustees, we wish to express our heartfelt gratitude to President Holland for his leadership that has helped all of us see and work for UVU’s true potential.  We will remain committed to the upward trajectory President Holland has envisioned and established.”

Holland will hold a question and answer session with students on Monday, Nov. 13 at 2 p.m. in SB 134 on UVU’s campus.