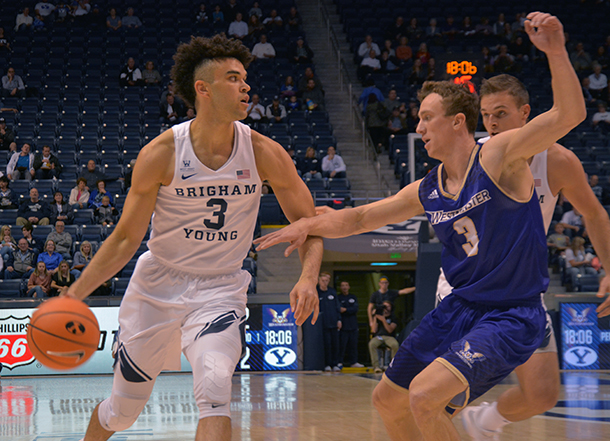 BYU junior Elijah Bryant dribbles the ball during BYU’s basketball’s 95–35 win over Colorado College, a Division III school. The newly named captain had 12 points and 9 rebounds in the game.
(Photo by Rebecca Lane/UV360)

While the final exhibition game may not have been exciting to watch, BYU coach Dave Rose was grateful for the opportunity it provided him to play all 11 eligible and healthy members of his young basketball team.

Tonight all 11 eligible players scored at least 2 points. The lowest amount of time any player saw on the floor was 7 minutes. Then, because BYU junior Nick Emery is out pending a NCAA ruling on his eligibility, BYU sophomore Zac Seljaas made his first appearance starting after returning from his LDS mission.

“I think that each guy has a real strength they can bring to the team and hopefully they can actually execute that when they get out there and play.” — Dave Rose, BYU basketball coach

“We’re all trying to figure out where the rotation is past 7 or 8 minutes, so guys will get opportunities, and when they get in there, they really need to take advantage of it,” Rose said. “I think that each guy has a real strength they can bring to the team and hopefully they can actually execute that when they get out there and play.”

Seljaas led the Cougars in scoring with 19 points, which included going 6-of-9 from behind the arc in 18 minutes of play.

“Zac brought us some memories of a couple years ago when he was playing here,” Rose said. “He’s a streaky shooter, but I think he can be a really consistent shooter for us. You make six 3s in a game, the film gets out and it will stretch the defense and it will help our inside guy tons.”

Seljaas wasn’t the only one to find a stride behind the 3-point line. After the team collectively missing its first six shots — with five from behind the arc — BYU made its next six 3-point attempts. In total, BYU finished the night with 13 made 3-pointers, a 40.6% shooting percentage from behind the arc. 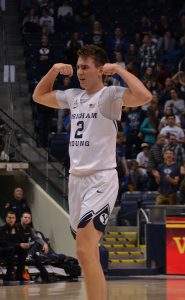 “That’s just basketball, said BYU junior Elijah Bryant, who scored 12 points and added 9 rebounds for the Cougars. “You’ve got to shoot with confidence. I think when everyone shoots with confidence, we get one to go in and then they all started going in.”

Rose hopes that 3-point shots will be more reliable than they have been the past few seasons.

“We need the 3-point line to come back as an advantage for us, where it was for quite a few years,” Rose said. “And the last few years we’ve been behind from there. We give up too many threes and we don’t make enough.”

Overall, Rose was happy with the progress he’s seen in his team over the three exhibition games.

“When you sum up the three exhibition games, it has been really good for this group, and we are getting better,” Rose said. “Our second half in this game was much better than last week’s second half against Westminster. It has to do with our mindset and our focus.”

BYU officially opens its 2017–18 season on Saturday against Mississippi Valley State on Saturday, Nov. 11 at 7 p.m. in the Marriott Center.