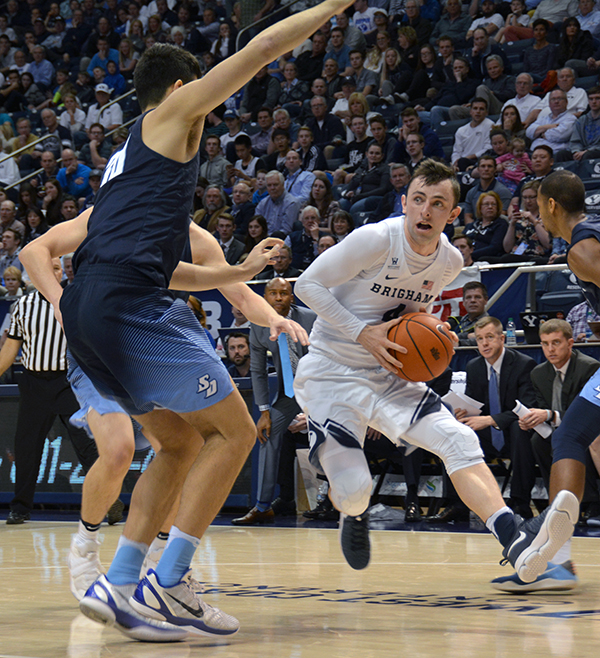 BYU basketball has two games this week, but the only game BYU junior Nick Emery will be playing is the waiting game.

Emery is awaiting a decision concerning his eligibility for the season after the NCAA launched an investigation regarding whether Emery accepted improper benefits from a BYU booster.

In BYU’s exhibition game against Westminster, Emery started, but left after four minutes in the game. He exited the Marriott Center sick shortly after being removed from the game. Since last week, Emery has healed from his illness, but BYU head coach Dave Rose has decided not to play Emery in the exhibition game.

“Nick is feeling better, yeah, but Nick won’t play this week, for sure,” Rose said following practice Tuesday. “It is kind of part of the plan and we are still trying to figure out information from the NCAA. He won’t be available.”

Emery, according to NCAA rules, would be allowed to play in BYU’s last exhibition game against Colorado College, but Rose is looking further in the future than the exhibition game as he tries to find what meshes well for the young Cougar basketball team.

“The exhibition games we knew he can play in. This week, I wanted to get ready for our Saturday game,” Rose said. “There’s no reason to play a guy that’s not going to play (Saturday), in my opinion. That’s where we are.”

Emery is one of six players returning from the 2016–17 roster. NCAA rules say a player can’t play in a regular-season game while under investigation. As Rose awaits the ruling, he is using the final exhibition game to get a better look at his team.

And the players are taking each day in stride. BYU sophomore TJ Haws says the group’s chemistry is a work-in-progress that is progressing.

“It’s an everyday process. It’s early in the season and we’re trying to find our groove and find our chemistry with guys,” Haws said. “A few of us have played with each other a couple years, so that helps. Like I said earlier, I feel like this team a huge thing that we’re trying to do is make the right play and that builds chemistry very quickly. For this offense to work and us to work, it takes trusting each other. I feel like that’s coming along great right now.”

Besides Emery, two other players will miss the exhibition game against Colorado College. BYU junior forward Braiden Shaw sprained his ankle in practice last week. One other forward, Ryan Andrus, has sat out thus far this season after injuring him knee in preseason practices.

BYU takes on Colorado College, a Division III school, on Wednesday, Nov. 8 at 7 p.m. at the Marriott Center. The game will be broadcast on BYUtv.

Rose announced Wednesday morning that juniors Elijah Bryant and Luke Worthington had been named team captains for the 2017–18 season.

“Elijah and Luke are two of our most experienced players and have a great approach to the game,” Rose said. “We’ll rely on them throughout the year to provide leadership in the locker room and on the court.”

Curtis headed to Congress, results in many other races uncertain Previous post