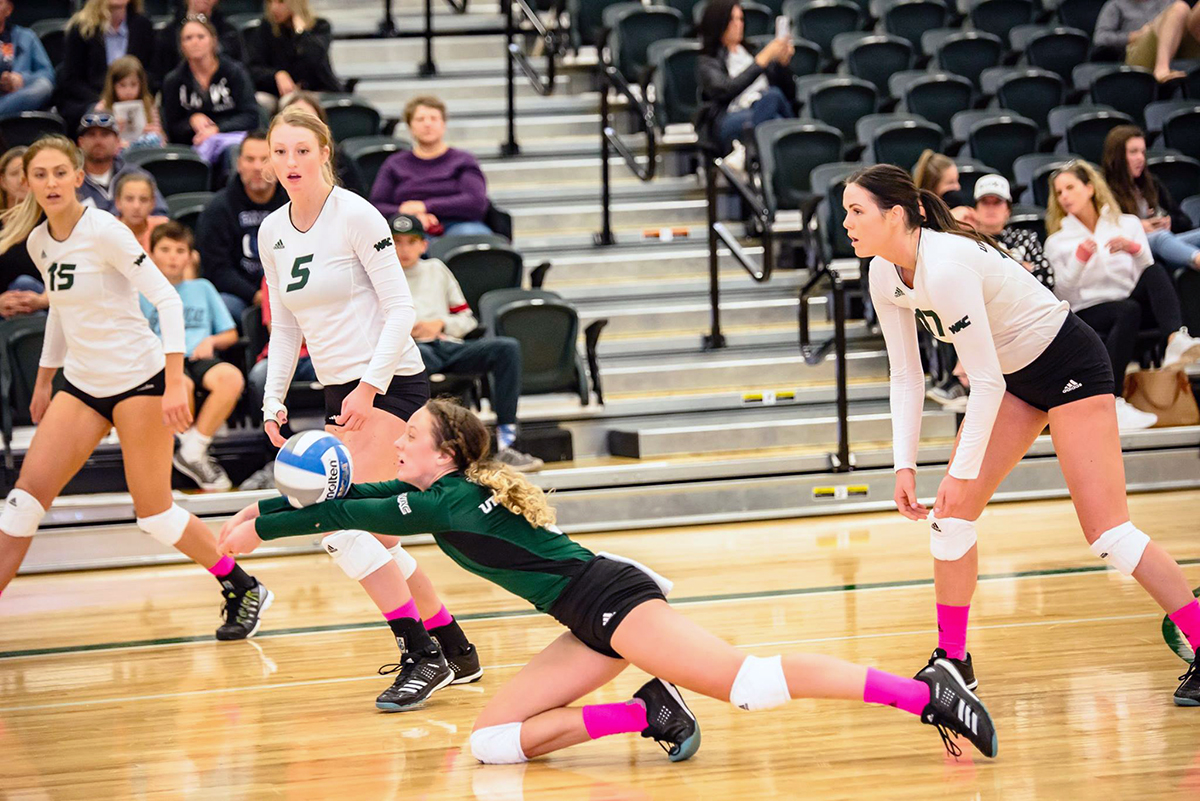 UVU volleyball earned a No. 3 seed in the WAC Tournament. (Photo by UVU Photo)

Finishing the season with a 9–5 conference record, the UVU volleyball team secured the third seed in this year’s Western Athletic Conference Tournament.

After a 1–4 start to the season and a six-game losing streak right before the start of league play, the Wolverines bounced back to win nine out of the 14 conference matches to finish the season at 14–15. Out of their nine conference wins, five were shutouts and three went to four sets. UVU beat three league teams twice including Grand Canyon, Chicago State and UMKC and beat all other teams once except for UT Rio Grande Valley — this season’s WAC Tournament host.

After losing back-to-back meets heading into their final week of the season, the Wolverines then swept UMKC (25–20, 25–23, 25–20) and beat Chicago State in four sets last weekend (25–27, 25–19, 25–22, 25–19) to end the regular season. UVU tied CSU Bakersfield with a 9–5 league record but held the tiebreaker advantage making them the No. 3 seed in the tournament. The Wolverines will take on the sixth-seeded UMKC Kangaroos in the first round on Thursday, Nov. 16 for a chance to advance to the semifinals.

“We are excited to head to the WAC Tournament,” said UVU head coach Sam Atoa. “The girls have been working hard as of late and we’re hoping that our momentum will carry over into the tournament. Every match will be a challenge, but if we play our game then I like our chances.”

“Our biggest improvement (this season) has been our consistency. We’ve set certain goals where our outsides need to be and where we would like our middles to be.” — Sam Atoa, UVU volleyball coach

In their season meet-ups, UVU needed only four sets to take care of UMKC on Oct. 14 (27–29, 25–14, 25–21, 25–18) and then only three sets to beat them on Nov. 9. Despite their success against the Kangaroos, the team is focusing on the basics of the game to ensure their skills are sharp for Thursday’s match.

“(We need) to be better at the simple keys of the game,” Atoa said. “And to be able to improve in our passing to help control what we do at the net.”

While this will be the fifth consecutive year the Wolverines have made the WAC Tournament, they enter with an all-time 1–4 tournament record. Last year, UVU had their strongest showing as the second seed and tournament’s runner-up (losing in the finals to UTRGV in straight sets.) But the Wolverines will have a chance to redeem themselves this year. If they can get past UMKC, the Wolverines will face UTRGV in the semifinals. In order to do so, UVU will need to stay disciplined.

“Our biggest improvement (this season) has been our consistency,” Atoa said. “We’ve set certain goals where our outsides need to be and where we would like our middles to be. We’ve been able to have a lot of the kids get themselves at that level and that’s really helped us be competitive this year.”

The Wolverines will try to advance in the tournament as they face UMKC on Thursday, Nov. 16 at 6 p.m. in Edinburg, Texas.