Home Life All is bright: Meet the man behind the brightest house on the block

All is bright: Meet the man behind the brightest house on the block 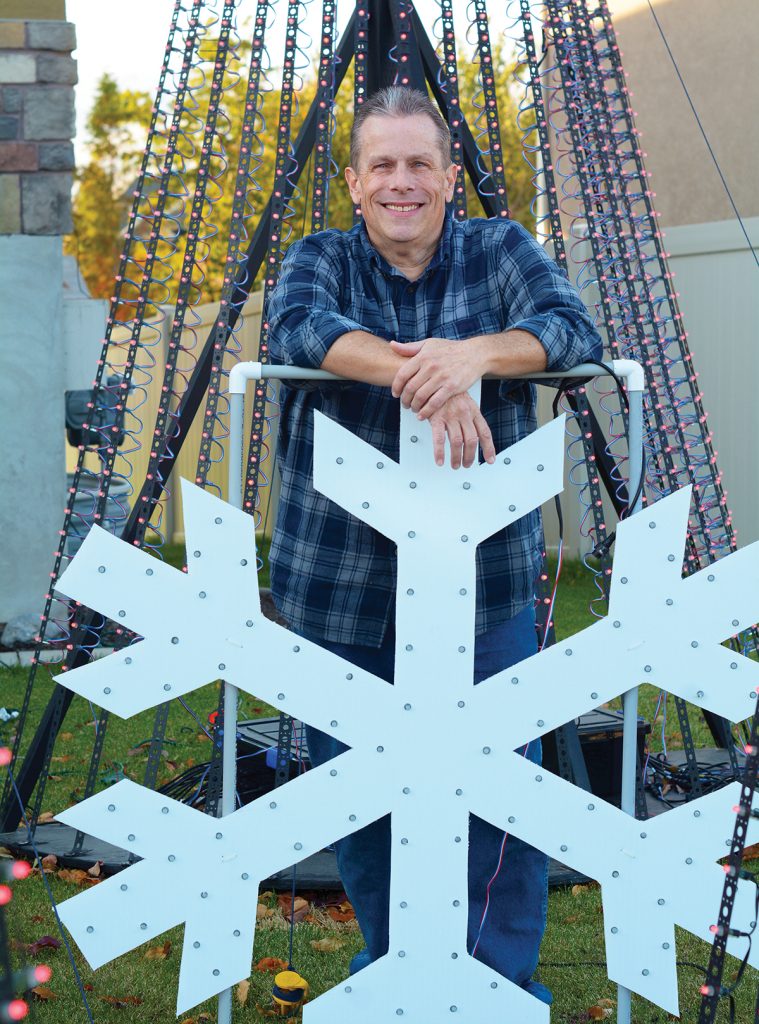 Michael Downey is a father of four, grandfather of two and a holiday lighting expert. To see his lights in all their glory, head to 2489 W. 700 South in Lehi.

Untangling a giant mess of Christmas lights doesn’t exactly foster the Christmas spirit. But for Michael Downey, it’s a labor of love. His display garners the admiration of light lovers near and far, with roughly 2,000 cars driving by his Lehi house each year. He uses more than 10,000 lights and synchronizes them with classic Christmas songs transmitted on an FM radio stream.

One motivation for Michael to get into Christmas lights was a less-than-amazing experience paying someone else to put them up. When he decided to do it himself, it became his new year-round hobby.

The Downey family turns on their Christmas lights Thanksgiving evening and keeps them on through the New Year. Recently Michael started to get a jump on his Christmas display by putting the lights out in October and programming them with Halloween colors.

“I like to keep it on the cheap,” Michael explains. “You can buy things already done, but most of the time I can do it on my own for a fraction of the cost.”

“I like to keep it on the cheap. You can buy things already done, but most of the time I can do it on my own for a fraction of the cost.” — Michael Downey

As technology has improved, Michael’s lights have gotten more impressive while his power bill has gotten less expensive. When he used primarily incandescent lights, his electricity bill would jump up about $100 during the holiday season. The new LED lights don’t affect his electricity bill and he can program each individual bulb’s color and intensity.

One of Michael and his wife Lorena’s favorite light experiences was when they helped welcome home a military member.

“He was getting home later in January, and his wife asked everyone to keep their holiday lights on so they could keep their tradition of driving around the neighborhood to see them,” Lorena says. “Michael programmed a special message and put it with a patriotic song.”

Michael and Lorena love sharing their little piece of Christmas cheer  — and sometimes Michael even puts on a Santa hat and hands out candy canes.

“We have gotten little thank you notes over the years. We love that people get excited about our lights,” Michael says.

Michael doesn’t believe in starting over each year. In fact, most of the lights attached to the exterior of his home are fastened to pipes instead of the roof itself. “That way I can pop it on and attach it in a few places instead of individually wrapping each light on,” he explains. This system allows Michael to only spend about 16 hours getting the lights out and ready to go each year.

If you go to the trouble of creating an incredible light display, think about where you are going to store it. Having a home for your lights will allow you to store them safely without breaking any bulbs. “The tallest decorative tree we have is 15 feet because my garage is 15 feet tall and it fits perfectly,” Michael says.

“Tons of people tell me they want to get an awesome display going and I always warn them to start small,” Michael says. “If you try to get too crazy at first, you will just get frustrated and give up.”