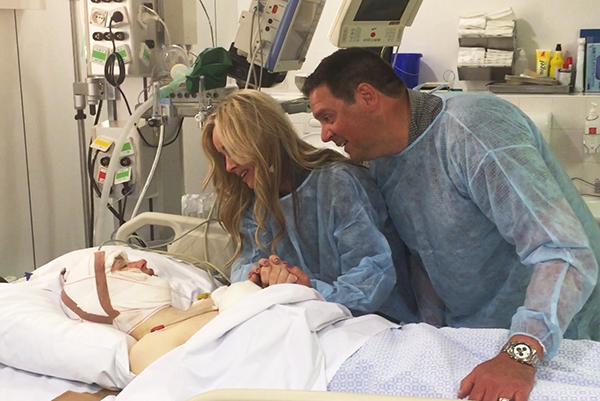 Elder Mason Wells, a Lone Peak High grad, is reunited with his parents Kymberly and Chad Wells at a hospital in Brussels. Elder Wells was one of four LDS missionaries injured in the Brussels airport bombing. (Photo courtesy of LDS Church)

Mason Wells was launched into a national spotlight when terrorists bombed the Brussels airport on March 22, 2016 — a spotlight Wells wanted to escape.

Serving as a missionary for The Church of Jesus Christ of Latter-day Saints at the time, Wells was part of a group dropping off a sister missionary at the airport when the first bomb detonated. One of four LDS missionaries injured, Wells had third-degree burns on his hands, serious wounds on his foot and shrapnel embedded into his body.

On that day, 32 people were killed and many more were injured. Wells was one of the survivors. And not only had he survived the bombing in Belgium, but he had previously escaped unscathed from the Boston bombing and Paris terrorist attack.

As Wells gained consciousness, he became one of the faces for the attack’s survivors, doing interviews with media outlets around the world. But he didn’t want the attention.

“When I was first injured, I wanted nothing more than to return to my normal life and to get past the memories I had,” said Wells, who graduated from Lone Peak High School in 2014. 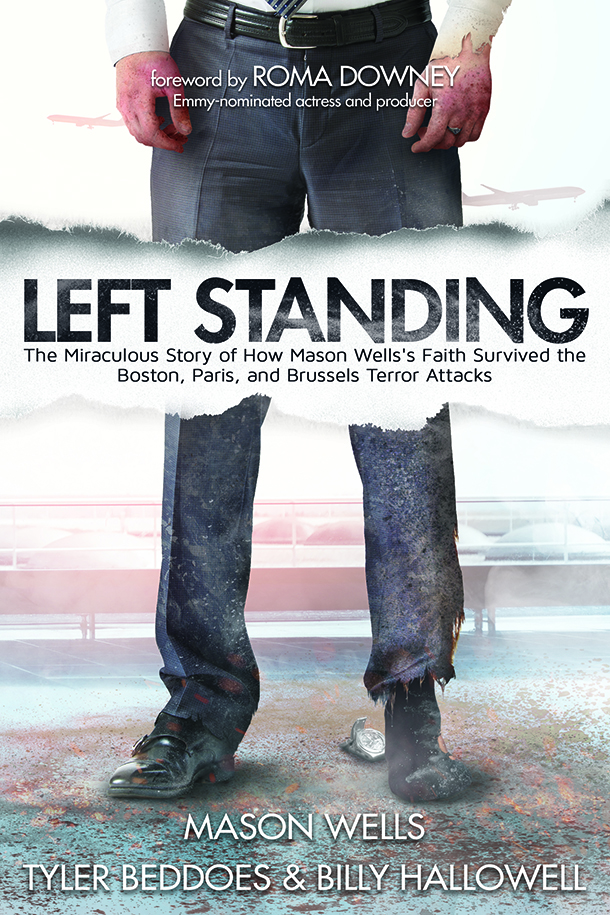 Now 20 months have passed since that horrific day in the Brussels airport. Many of Wells’ wounds have healed, he is having a seemingly normal life attending the United States Naval Academy and Wells feels it is time to share his own story, which he has done in his book, “Left Standing: The Miraculous Story of How Mason Wells’s Faith Survived the Boston, Paris and Brussels Terror Attacks”(Cedar Fort, $14.99).

“I think what made it the right timing was I felt comfortable sharing those experiences,” Wells said. … “Those were some of the hardest experiences I had ever gone through in my life. There was a time directly afterwards in the months following where it wasn’t the right time to share. There were a lot of things I kept to myself, a lot of things I wasn’t ready to share. It’s taken reflection and introspection to decide when to let things out.”

Wells began writing his account three months into his recovery, but it wasn’t until the beginning of this year that he started the manuscript for his book. And that was after meeting Tyler Beddoes at the American Freedom Festival in Provo, Utah in July 2016.

“I’m really glad I decided to introduce myself on that summer day (to Tyler) because he’s become an incredible mentor,” Wells said. … “Tyler and Billy (Hallowell) have done a great job of mentoring me through the whole process, of helping me figure out how to say the things I wanted to say.”

In the 190-page book, Wells chronologically walks the reader through his experience first at the Boston bombing, then in Paris and finally at the Brussels airport. He continues with his life now as well as lessons learned from his experience, specifically his ability to hold onto faith.

“There are a lot of things that I hadn’t even talked over with my parents that much,” Wells said. … “Anyone who reads the book is going to experience things as I experienced them. They are going to understand where my faith comes from. They are going to understand the things that I learned that helped me to find hope when I was lying there injured or after taking steps in the hospital.” 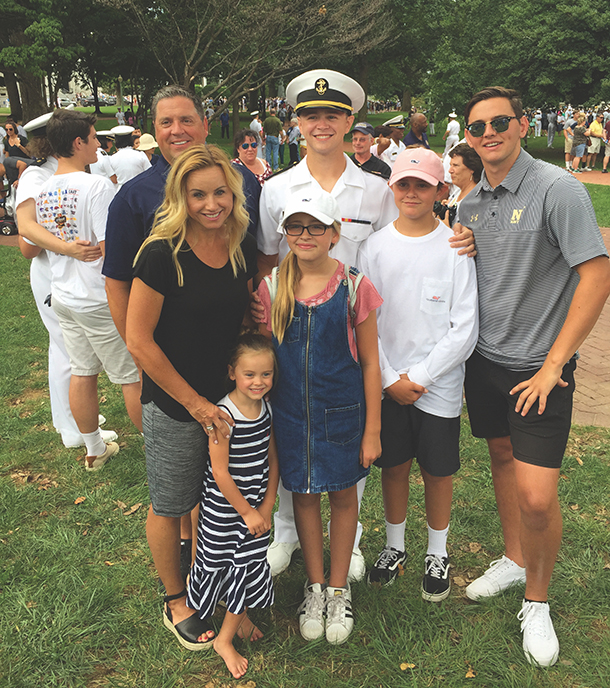 Mason Wells (center) stands with his family as he enters the United States Naval Academy. He is in the class of 2021. (Photo courtesy Mason Wells)

As he’s transformed his tragedies into the triumph associated with survival, Wells hopes that the message he shares in his book will resonate with others.

“We all don’t end up getting injured by terrorists or having to face explosions, but choosing to have hope, trusting in faith, understanding that there’s higher power than us — those are things we can all identify with. A lot of those experiences that happened to me are in the book. That’s what I’m hoping resonates with people.”

Later Wells added he hopes people learn is, “The number one thing is hope is the antidote to fear. No matter what happens to us in life, our destiny is what we make it.”

As Wells wrote “Left Standing,” he says he prayed to know what to include in his book. Some things he left out because they were sacred, but many details he included because people would be able to relate to them and, hopefully, learn from his experiences as he did.

“Hopefully, people who read the book they can realize that even in their own struggles there’s someone listening,” Wells said. “That person is God. Even when they are going through hard things in life, it is not unprecedented that other people have walked that road before them.”