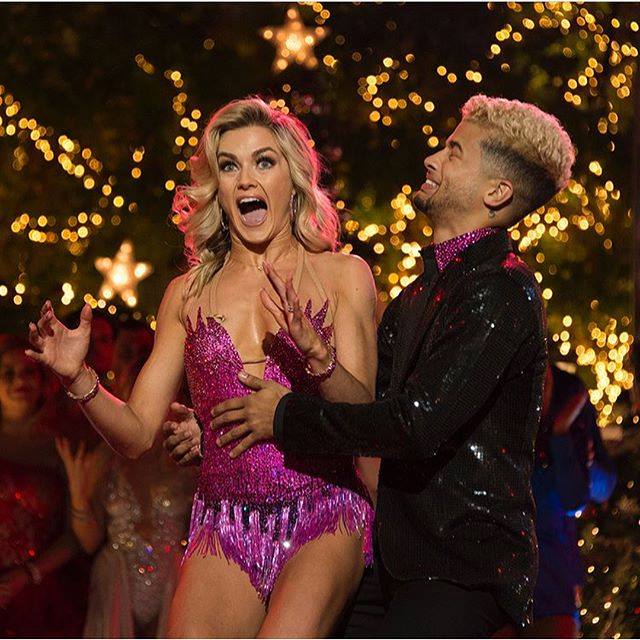 Provo native Lindsay Arnold and actor Jordan Fisher celebrate as their are announced winners of Season 25 of “Dancing With the Stars.” (Photo courtesy of Lindsay Arnold Facebook)

In a frenzy of exclamation marks, Arnold wrote on Facebook: “OH MY GOSH!!!!! WOW!!! I literally have no words!! These faces say it all. I am so unbelievable grateful for this season, this partner/brother of mine, the show @dancingabc, and all of you amazing fans who voted!! We did it!! 4, 3, 2, 1!!!!!!! Thank you thank you from the bottom of my heart I love you all and appreciate your support!!!”

While the former Provo resident has coached six different celebrities and danced on 10 seasons on the reality TV show, this was the first season she won. Fisher, an actor/singer who is known for performing in “Hamilton” on Broadway, led the competition in scoring for the majority of the season.

“When I met Jordan week one, I was beyond excited for what was to come because I knew there was so much potential,” Arnold said in a video. … “Partners like Jordan don’t come around very often. I’m just so grateful I’ve been able to do this season with him.”

Together the two overcame injury — Arnold hurt her knee and Fisher endured an eye injury — to win the Mirror Ball trophy. On the finale, the duo performed their samba from Latin night as well as a fusion dance that incorporated dance steps from both Salsa and Paso Doble, which earned 10s across the board.

BYU graduate Lindsay Stirling and her professional dance partner Mark Ballas came in second place. For their first number, the couple performed their pajama-themed Jive from Guilty Pleasures Week that received 10s across the board.

“You are so special because you have a star quality that is so unlike any star quality I’ve ever seen. It’s not the obvious star quality that we’re always looking for,” judge Carrie Ann Inaba told Stirling following the couple’s first dance. “There’s something so pure and beautiful and you draw us in so intimately and you have become such a brilliant dancer.”

In third place, actor Frankie Muniz and his celebrity partner Witney Carson, an American Fork native, danced their pirate-themed Argentine Tango from Disney week. They earned a perfect score for the dance.

The duo earned a 28 out of 30 for their fusion dance, which combined the Foxtrot and Tango.