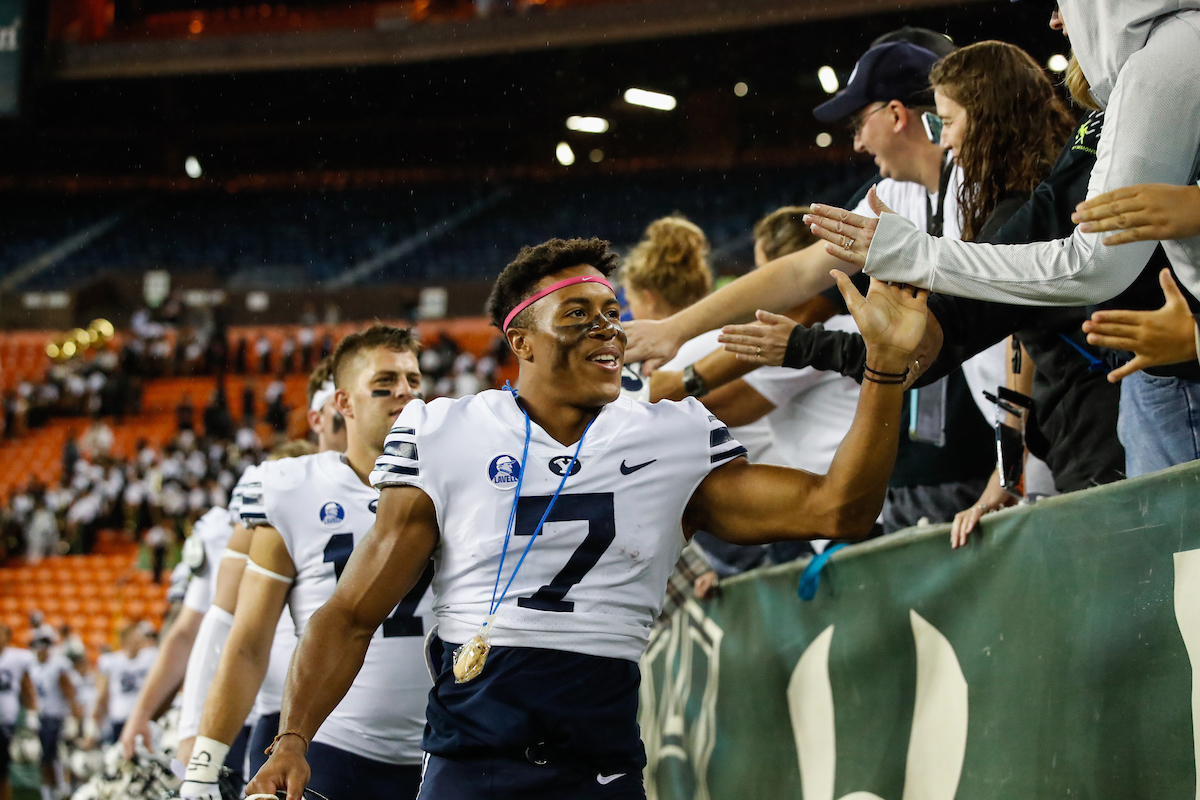 BYU football finished out its season with a 30–20 win against Hawaii on Saturday. (Photo by BYU Photo)

The BYU football team beat Hawaii 30–20 in their final game on Saturday to finish the 2017 season with a 4–9 record.

BYU racked up 451 yards of total offense including a season-high 285 rushing yards. Junior Squally Canada recorded 113 yards on 17 carries, including 99 yards in the first quarter. Sophomore Austin Kafentzis contributed 98 yards on 18 carries and sophomore Riley Burt added 75 yards on 13 carries. True freshman Joe Critchlow went 14 for 23 for 166 yards and one touchdown in the victory.

The Cougars jumped on the board in their first possession thanks to a 40-yard touchdown run from Canada, but the Rainbow Warriors evened the scored at seven with a recovered fumbled that was then run into the end zone. Canada then recorded his second touchdown of the day to put BYU up 13–7 and the team took that lead into the second half.

Both teams struggled to score in the third quarter until Critchlow connected with freshman Neil Pau’u for an 11-yard touchdown pass with under two minutes left in the quarter to extend the Cougar lead to 20–7. Hawaii recovered another fumble — this time on a punt return only 25 yards from the end zone to close the third quarter. They capitalized with a touchdown at the beginning of the fourth quarter but junior Zayne Anderson blocked the extra point to keep the score at 20–13.

Junior Andrew Mikkelson nailed a 35-yard field goal — the first of his career — with 6:21 left in the game to put BYU ahead 23–13. Burt was the next Cougar to score with an 11-yard rushing touchdown — also the first of his career — with 3:46 on the clock to increase the lead to 30–13. Hawaii scored a touchdown with less than two minutes remaining to play to make the final score 30–20.

The BYU football team won’t be playing in a bowl game, but they finished the year with a win and avoided a 10-loss season.

After losing 71–59 to Alabama on Friday night, the BYU men’s basketball team bounced back to beat UMass 68–66 on Saturday. The Cougars moved to 4–2 on the year with the victory.

“The challenge at halftime was that your effort has to be sustained by your will and determination, not by how you’re playing,” BYU head coach Dave Rose said. “That is where we won the game. It was all effort and execution in the second half, sustained over a long period of time.”

The Cougars trailed 38–28 at halftime and were still down 10 with under five minutes left in the game. They then went on an 11–0 run to take a one-point lead with 1:55 to play. BYU was up three with under 30 seconds to go but a 3-point play by UMass tied the game at 66. With four seconds left, a dunk from sophomore guard Jahshire Hardnett to sophomore forward Yoeli Childs secured the 68–66 Cougar victory.

Childs recorded his third double-double of the season with 19 points and 11 rebounds. He also had five assists, four blocks and two steals. Junior guard Elijah Bryant contributed with 18 points. As a team, BYU out rebounded the Minutemen 43 to 31.

The Cougars will face a couple of in-state rivals this week. First up is UVU in the UCCU Crosstown Clash on Wednesday, Nov. 29 followed by Utah State on Saturday, Dec. 2.

BYU rallied to beat UMass thanks in part to this game-winning dunk with 4.1 seconds left by Yoeli Childs. Great play by Jahshire Hardnett to get him the ball. #BYU #BYUhoops pic.twitter.com/WdB2zG9uP5

The BYU women’s basketball team fell 79–63 to Georgia on Saturday afternoon at the Marriott Center to move to 3–2 on the year.

“Georgia’s an outstanding team,” BYU head coach Jeff Judkins said. “I was proud of us for fighting to come back. We need to not let it get out of hand in the first place though.”

Starting out the game in a 9–2 hole, the Cougars bounced back to make it 13–12 at the end of the first quarter. But a 14–2 Georgia run to start the second quarter put BYU in another big hole. Georgia continued to build their lead but the Cougars went on a 7–0 run to end of the half. They trailed 36–22 at halftime.

The Bulldogs scored seven straight points to open up the second half but BYU followed with their own 7–0 run. Freshman center Sara Hamson then scored seven of her own points at the end of the third quarter to cut the deficit to 56–44 heading into the fourth. But the Cougars would never regain the lead and lost by 16.

The Cougars will look to bounce back as they face the University of Northern Colorado on Thursday, Nov. 30.

In their fourth straight victory, the UVU men’s basketball team beat North Dakota 83–75  in overtime on Saturday to improve to 4–2 on the year.

“This is a little championship-team run that we’re on here,” UVU head coach Mark Pope said. “This is another team that won their conference outright and their conference tournament last year. I love the fact that we’re getting the chance to play these guys and see how we can grow. I think our guys grew tonight.”

A tight game throughout ended 67–67 at the end of regulation. UVU scored four quick points to begin overtime and went on to finish the extra period with 16 points including eight free throws on their way to win the game by eight.

The Wolverines will look for their fifth straight victory as they battle BYU in the UCCU Crosstown Clash on Wednesday, Nov. 29.

The UVU block squad was out in full force on Saturday, protecting the rim for an 83-75 overtime road win at reigning Big Sky champion North Dakota. #BlockParty pic.twitter.com/2EhdiI8bYe

The UVU women’s basketball team lost 61–41 against Eastern Washington on Saturday afternoon to drop to 0–5 on the season.

“It seems to be a theme with us where we do some good things but then have some lapses,” UVU head coach Cathy Nixon said. “We’re going to focus on improving ourselves and being more consistent, and I think when we do that we’ll start getting some wins.”

After leading 13–12 at the end of the first quarter, the Wolverines struggled to score. The team only put up 15 total points in both the second and third quarters. UVU was then outscored 22–13 in the fourth quarter to lose the game by 20.

The Wolverines will look for their first win of the season against Dixie State on Tuesday, Nov. 28.

Roundtable: Direct message from the direct sales industry Next post