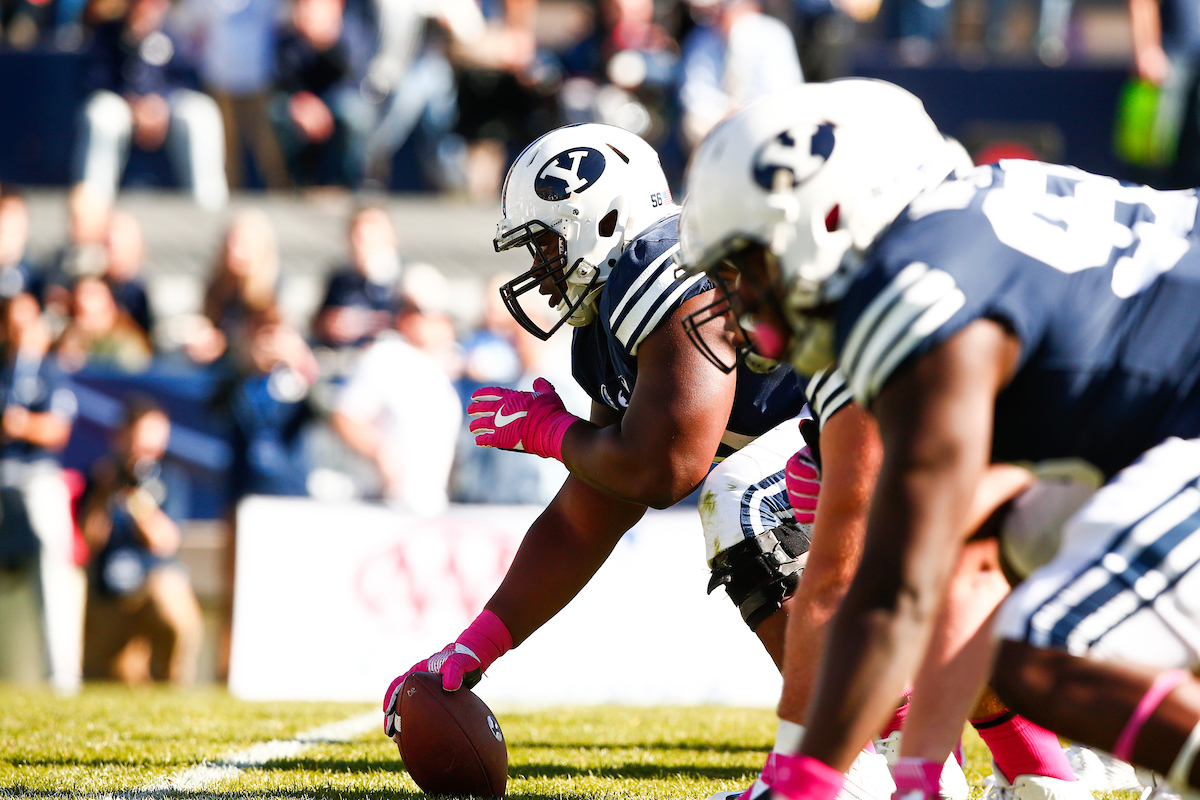 BYU football had a rough season, but there were still a few highlights. (Photo by BYU Photo)

These are strange times for BYU football.

For the first time since 2004, the Cougars will not play in a bowl game after enduring a historically bad season. BYU finished with a 4–9 record, tallying the highest number of losses in a single season since going 1-9 under Chick Atkinson in 1955.

“I’ve said it before, but I owe it to the fans and players to get this team right and make sure that this season doesn’t happen again,” BYU coach Kalani Sitake said, following the Hawaii game. “The first year we went 9–4, the second year we went 4–9 and where will we go the third year? I’m willing to work with our coaching staff and players to work as hard as we can and see what happens when we play Arizona next season.”

“I’ve said it before, but I owe it to the fans and players to get this team right and make sure that this season doesn’t happen again.” — Kalani Sitake, BYU head football coach

Sitake took the first step to making changes ahead of the 2018 season on Monday, relieving Ty Detmer of offensive coordinator duties after two seasons. It could be the first move in a larger reorganization for BYU on that side of the ball.

Returning players will be expected to shake things up in terms of their preparation too.

“There needs to be good leadership,” senior linebacker Fred Warner said. “They need to take the offseason very seriously, not just in the weight room but making sure they learn the game, study film from this year and learn from mistakes we made.”

Amid a flurry of injuries, costly suspensions and ugly outcomes on the field, the Cougars did enjoy a few moments to give a glimmer of hope for the future.

Here’s a look back at 10 highlights from the 2017 football season: 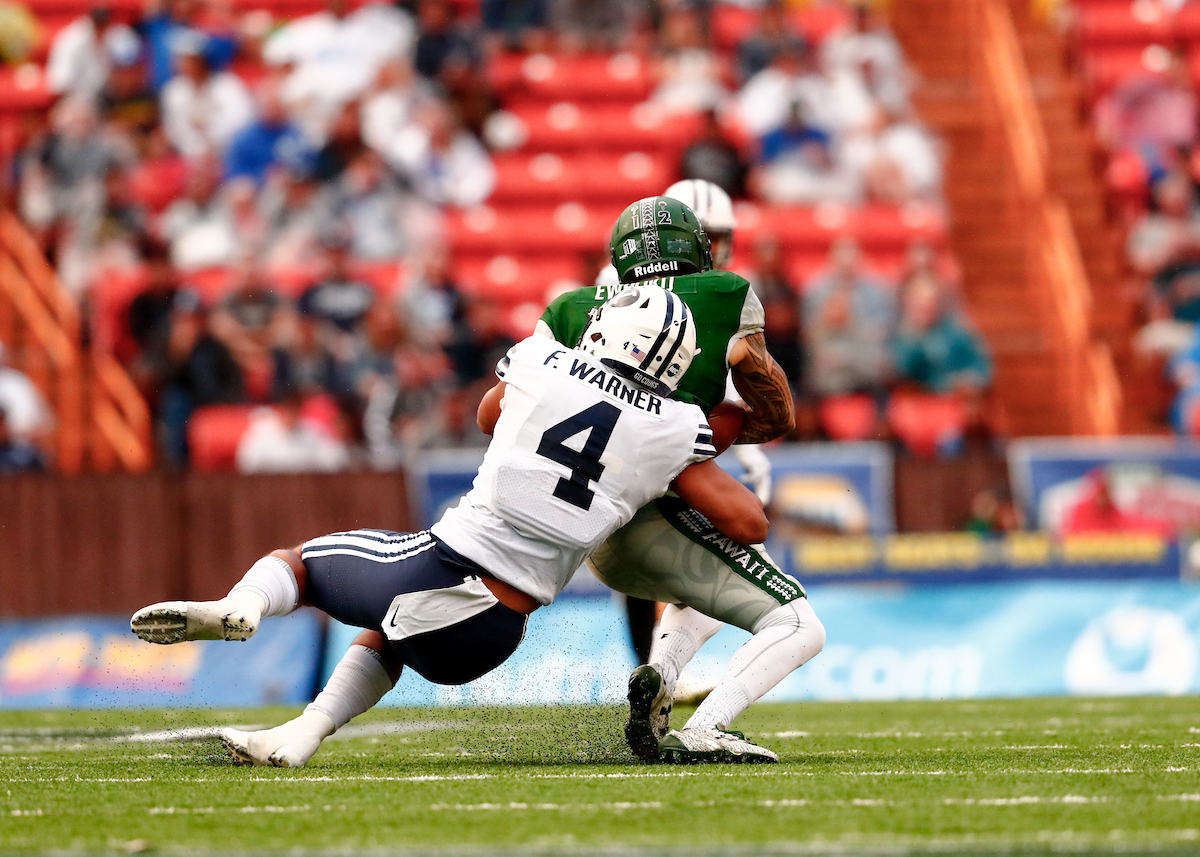 No one can question Fred Warner’s heart or his leadership. The senior linebacker devoted every ounce of energy he possessed to making plays for the defense throughout the season. Warner’s refusal to give up could enhance his prospects of landing on an NFL roster in 2018.

Warner ends his career ranking 24th all-time at the school with 264 total tackles. That’s the fifth most tackles for a BYU player since 2000. He also totaled 32 tackles for loss and 6.5 sacks. Warner was active in producing turnovers for the Cougars. He had seven career interceptions — including a pair of pick-sixes — three forced fumbles and five fumble recoveries.

It’s a safe bet that Matt Bushman will play a key role in generating success for the BYU offense going forward. Bushman showed plenty of promise as a playmaker during his debut season.

The freshman totaled 520 yards and three touchdowns on 49 receptions. Bushman led the Cougars in all three categories. His 49 catches rank third all-time among freshman at BYU and his 520 yards are the fifth most ever among those first-year players.

Filling the shoes of Jamaal Williams proved tougher than Squally Canada anticipated. The junior endured an up-and-down season while battling injuries and losing his starting job for a time. When injuries and suspensions to other backs opened the door again for Canada, he made the most of his second chance.

Canada totaled 461 yards and four touchdowns on 65 carries in BYU’s four November games. He rushed for a career-high 213 yards to power a 31–21 win over UNLV and followed up with 113 yards against Hawaii — all coming before halftime — in a 30–20 win over the Rainbow Warriors.

Season-ending injuries to quarterbacks Tanner Mangum and Beau Hoge forced BYU to turn to freshman Joe Critchlow late in the season. Critchlow began the season at fourth-string on the depth chart, and planned to redshirt before being pressed into action.

His first start for the Cougars turned out to be a successful one. Critchlow became the third true freshman at BYU to win in his first start, leading the Cougars to a 31–21 win over UNLV. He threw for 160 yards and a touchdown on 14-of-22 passing.

Critchlow posted a 2-1 record as a starter in 2017. He totaled 583 yards, three touchdowns and four interceptions in those games.

5. Brayden El-Bakri delivers the hit of the year

BYU snapped a seven-game losing streak with a 41–20 win over San Jose State to close out October. Momentum swung in the Cougars favor for good during the first quarter thanks to an incredible play from Brayden El-Bakri.

The junior fullback leveled Spartans kick returner Rahsheed Johnson and forced a fumble, which he snapped up at the San Jose State 10-yard line. BYU quickly cashed in with a 11-yard touchdown pass from Mangum to Bushman to give the Cougars a 14–0 lead and the Spartans never seriously threatened them after that point.

6. Micah Hannemann returns an interception for a score at Utah State

Until a slew of turnovers derailed BYU in a 40–24 loss to Utah State, the Cougars enjoyed a strong start against the Aggies. Most of it can be credited to the swing of momentum Micah Hannemann created.

The senior read USU quarterback Kent Myers perfectly and stepped in front of a bubble screen pass and raced 46 yards untouched into the end zone. His pick-six tied the game at 7–7 and breathed life into BYU on both sides of the ball until Hoge exited the game in the second quarter with an injury.

Hannemann ended up being the only BYU defensive player to return an interception for a touchdown in 2017. It was his first and only career pick-six.

One thing became certain with Jonny Linehan as BYU’s punter. He offered stability and reliability on a team that lacked both elements at so many other positions. Linehan consistently gave opposing offenses long fields to work with throughout the season.

He punted 59 times in 2017, averaging 42.93 yards per punt. Linehan had 26 punts inside the 20 and 10 that covered 50 or more yards. The senior also made a name for himself off the field, winning fans on social media with his humorous and thoughtful tweets on Twitter.

It took Khyiris Tonga some time to shake off the dust and cobwebs after playing football for the first time in four years. Once Tonga grew comfortable in his role, he showed the potential to be a monster up front for BYU over the next couple of seasons.

Tonga totaled 19 tackles and 4.0 tackles for loss on the defensive line. He had a pair of sacks, three pass breakups and a forced fumble. The Cougar defense should be stronger in 2018 if Tonga can live up to his full potential.

Injuries hit BYU hard at many positions. Some of the greatest attrition came at running back. Canada, K.J. Hall, Kavika Fonua and Trey Dye all were knocked out by injuries at one point or another during the season. The Cougars were down to former quarterback Austin Kafentzis and Riley Burt in the backfield by the second half of the Hawaii game.

One positive outcome is that many running backs got serious playing time for the Cougars. BYU had five different players total at least 100 rushing yards for the season. If the Cougars can stay healthier in 2018, there will be plenty of options to choose from in the running game.

10. Cosmo shows off his dance moves

Amid a tough football season, BYU fans can take solace in the fact that their mascot is at the top of his game. Cosmo drew tons of positive national attention for showcasing some wicked dance moves during a halftime performance that went viral earlier this season.

His hip hop routine set a trend and inspired mascots at other schools to show off their best dance moves. Cosmo set the bar high, leaving fans wondering what new steps he’ll break out in 2018.