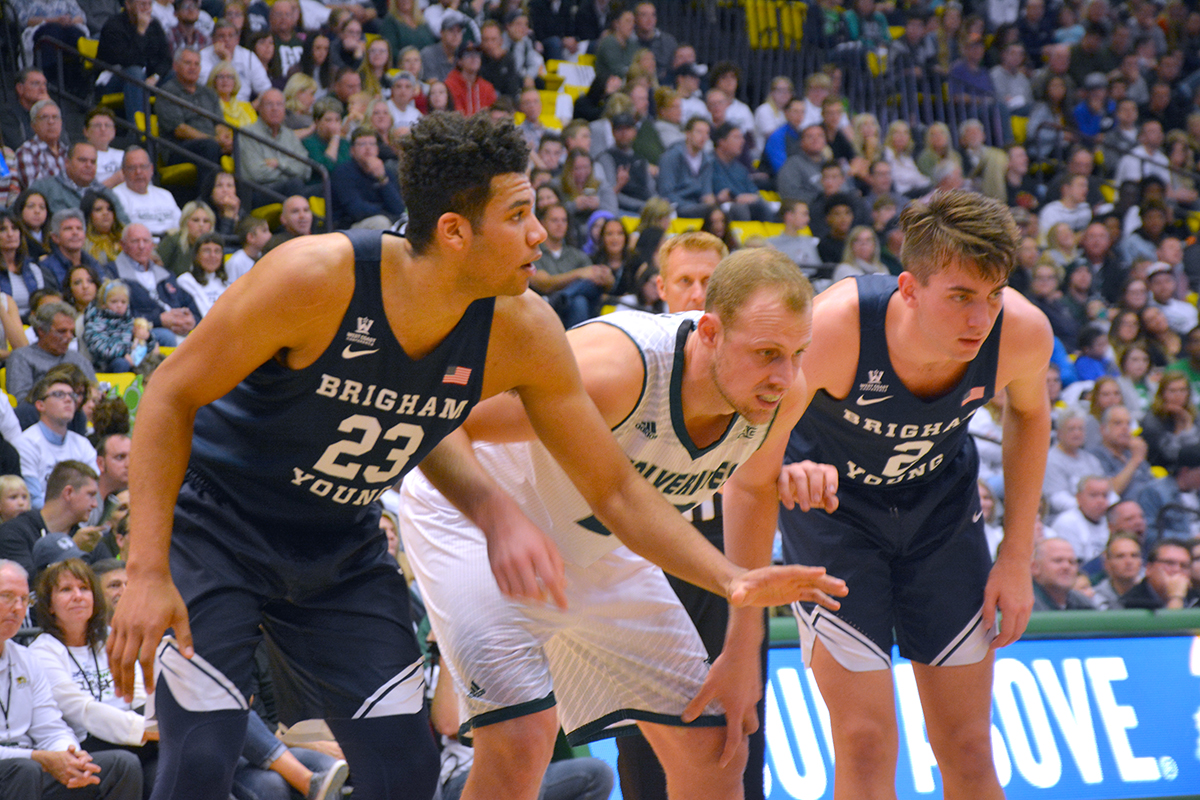 It was a cruel twist of fate for UVU and sweet piece of revenge for BYU at the UCCU Center Wednesday night.

Besides the obvious difference — that the Cougars won this year — the roles reversed in many ways. The Cougars maintained control of the game both offensively and defensively.

“Every single day we hear about the UVU game last year,” said Yoeli Childs, a BYU sophomore, “and we wanted to come out and have a defensive effort and show what this team is all about and what we’re capable of doing. I think that’s what we did tonight.”

Childs, who scored his third consecutive double-double with 24 points and 11 rebounds, credits a mental shift on defense for the difference in the 2017 matchup. Going into Wednesday night’s game, the Cougars set a goal to get what the team calls a kill, which is three defensive stops in a row.

“We were much better defensively,” said BYU coach Dave Rose. “The 3-point line was a real issue for us in last year’s game. They shot 37 last year and they shot eight tonight. That’s probably the biggest difference.”

Oh, the threes. Anyone who watched last year’s game at the Marriott Center remembers UVU’s 114–101 win that included UVU shooting 48.6 percent from behind the arc and making 18-of-37 threes.

This year, BYU saw fit to return the favor.

“Every single day we hear about the UVU game last year and we wanted to come out and have a defensive effort and show what this team is all about and what we’re capable of doing. I think that’s what we did tonight.” — Yoeli Childs, BYU sophomore

BYU made 12-of-26 3-point attempts, totaling 46.2 percent average shooting from behind the arc. On the other end of the court, that BYU defensive Rose talked about came handy. UVU was limited to eight 3-point attempts of which they only made one.

“I’m disappointed in the performance we put out there,” said UVU coach Mark Pope. “BYU just crushed us. They out-coached us by far. Their players out-executed us and out-toughed us, not just in physical toughness which was a huge component in the game but in their discipline and how they played.”

UVU (4–3) was led in scoring by senior Brandon Randolph with 16 points followed by sophomore Jake Toolson with 14 points, but no one person could get the job done for UVU — and the team was’t playing together.

“We turned into isolation basketball,” Pope said. “That’s not us, that’s not how we play. Everything got so slow and stuck in molasses. I’ve got to fix that. We’ve got to restore some pace and execution to our game.”

BYU travels up north for another in-state rivalry game. This time the Cougars take on Utah State in Logan on Saturday, Dec. 2 at 7 p.m. 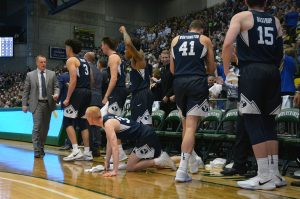 BYU’s bench celebrates a basket during BYU’s 85–58 victory over UVU at the UCCU Center. (Photo by Rebecca Lane/UV360)

BYU junior guard McKay Cannon made his first appearance in a BYU game after receiving approval to play from the NCAA less than four hours before tip-off.

“McKay’s been in this limbo, no-man’s land for almost two and a half months to go through this process,” Rose said. “It’s been really slow and tedious. But about two weeks ago, he realized there was a chance, that they were actually looking at it from two or three different points of view. From there, I think he realized there’s an opportunity.”

Rose told the team on the bus ride to UVU that Cannon could officially play with the team.

“I was hopeful,” the Weber State transfer said. “It was hard to prepare myself because you don’t know. It’s in the hands of the NCAA, but I’m grateful that they gave me an opportunity.”

In his debut, Cannon contributed eight points and six assists in 20 minutes of play, including hitting his first shot.

“McKay’s a beast,” Childs said. … “That first pull-up three he had — that’s automatic for him. He’s hard to guard. He’s a gritty player. He’ll do anything to win a game.”

With the brand: Meet the branding expert helping entrepreneurs rock the retail world Next post