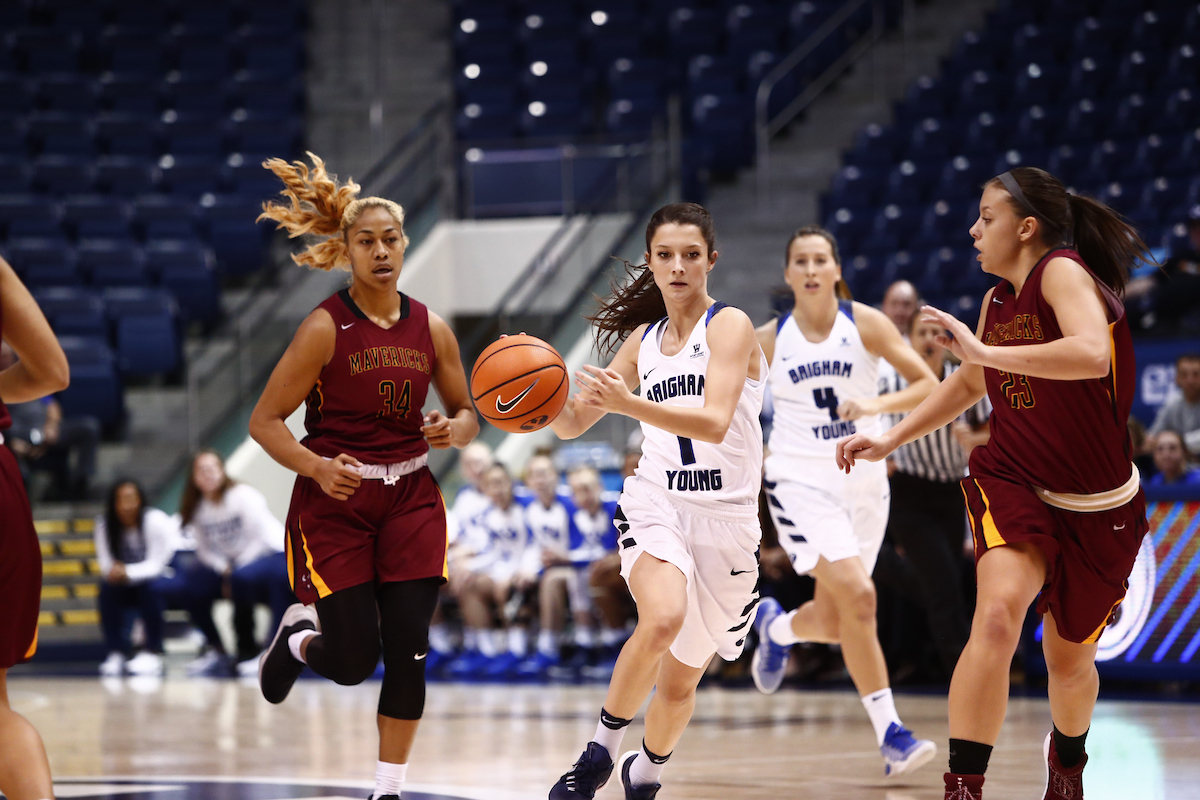 With only two returning starters and six new freshman, the BYU women’s basketball team is looking a lot different this year.

The Cougars lost four seniors since last season, most notably guard Makenzi Morrison Pulsipher and forward Kalani Purcell. Pulsipher averaged 13.5 points per game for BYU while Purcell averaged 12.7 points and 10.5 rebounds per game. The 2016–17 team finished with a 20–12 record and lost in the first round of the Women’s National Invitation Tournament to Washington State.

This year BYU is led by senior guards Cassie Broadhead Devashrayee and Malia Nawahine. There are five other upperclassmen, three sophomores and six freshman to round out the roster. Opening the 2017—18 season with a 3–2 start, the Cougars have done a decent job filling voids but are still building that team culture.

“We’re a young team so it’s a learning process,” Devashrayee said. “All of us haven’t played together for that long so we just need to mesh a little bit better and that’s going to come with time.”

One player who has filled some big shoes is sophomore guard Brenna Chase. Her 14 points per game is the second highest average on the team behind Devashrayee. Although her offense is a big contribution, her competitive defense has been the highlight for BYU coach Jeff Judkins.

“We’re a young team so it’s a learning process. All of us haven’t played together for that long so we just need to mesh a little bit better and that’s going to come with time.” — Cassie Broadhead Devashrayee, BYU senior

“Brenna hasn’t been a surprise, but she’s come along a lot faster than I anticipated,” Judkins said. “I know she can shoot and I know she can score, but her defensive presence in the last games we’ve played has been really positive. She’s aggressive and active. I think she’s going to turn out to be a really, really good player.”

In addition to Chase, sophomore forward Shalae Salmon has also stepped up to help the Cougars. She is averaging 8.2 points per game and 10.8 rebounds per game. Her play inside has helped open up the whole team’s offense.

“I think people forget Shalae is a sophomore,” Devashrayee said. “She’s improved immensely from last year to this year. I think that’s a huge thing that we have an inside presence. When (the defense) doubles her, we have open shots and vice versa.”

“I think Paisley has done a great job,” Nawahine said. “She does her job well and gives us a good spark off the bench. Sara also does a good job giving us a lot of length inside.” 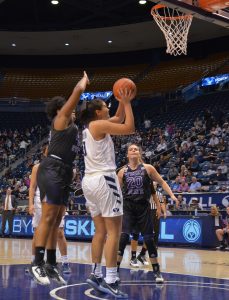 BYU sophomore forward Shalae Salmon shoots the ball in a game against Weber State during the 2016–17 season. (Photo by UV360)

Although BYU has done well for a young team, the biggest area the Cougars need improvement in is ball security. The team has been plagued by their 20.4 turnovers per game and Judkins is emphasizing the importance of taking care of the ball.

“I (tell) them there’s a good play and a great play and we’ve got to take the great play,” Judkins said. “We force it. It’s kind of the young kids. They come in and try to do this fancy stuff, but they can’t do that. You’ve got to make the easy play. When you become a really good player everyone thinks you become stronger and quicker and it has nothing to do with that. It’s making decisions better.”

It’s that sharp mentality Judkins and the upperclassmen are trying to instill in the younger players.

With most of the season still to play, BYU has a lot of potential to do well and keep building their future. The young Cougar team will head to Colorado for two games this week. They first face the University of Northern Colorado on Thursday, Nov. 30 and then Colorado State on Saturday, Dec. 2.

Not a family reunion: BYU and UVU ready for 'backyard brawl' in Crosstown Clash Previous post