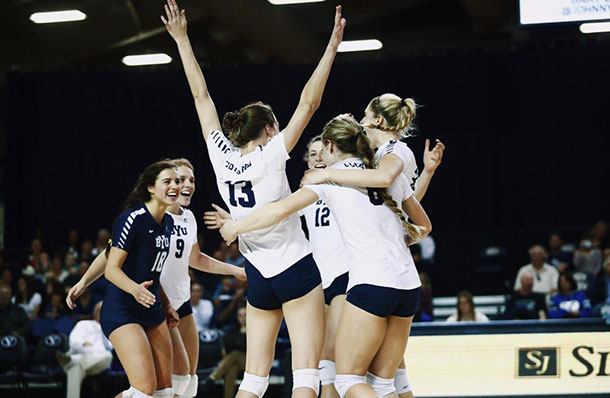 The BYU women’s volleyball team celebrates a point during it’s first round win over American in the NCAA Tournament. The Cougars advanced to the Sweet 16 for the sixth-straight year. (Photo by BYU Photo)

“I’m so proud of the way our team played tonight,” BYU head coach Heather Olmstead said about the Oregon match. “They never wavered from what they wanted and stayed focused the entire match. Roni (Jones-Perry) was unbelievable on the front and back row. Mary (Lake) had some fantastic digs that kept the rallies alive and Lyndie (Haddock) set a great match. We’re excited we get to practice on Monday and want to keep getting better.”

With the victory, the Cougars advance to the third round of the NCAA Tournament and will head to the University of Kentucky to face the fourth-seeded Wildcats on Friday, Dec. 8.

The BYU men’s basketball team beat in-state opponent Utah State 75–66 on Saturday night. With a three-game winning streak, the Cougars moved to 6–2 on the year.

BYU trailed for most of the first half until a 10–3 run and a three-point play from Childs gave the Cougars their first lead of the night at 24–23 with 1:18 to play in the half. After extending their lead to seven at the beginning of the second half, the Aggies went on a 9–0 run to reclaim the lead. The two teams went back-and-forth until about eight minutes to go when BYU took a 55–49 lead thanks in part to a three from Haws and a layup from Childs. A three-pointer from Bryant put the Cougars up 10, 62–52, with only 3:24 to play and the team then went 9-of-10 from the free-throw line to seal the 75–66 victory.

The Cougars will look to extend their win streak to four as they battle Illinois State on Wednesday, Dec. 6.

Coming off a tough overtime loss, the BYU women’s basketball team lost another close game, this time 56–54 to Colorado State University on Saturday. The Cougars dropped to 3–4 on the year and have lost three straight.

“Our second quarters hurt us in both games this week,” BYU head coach Jeff Judkins said. “We fought back in the second half, but we also made mistakes. They did a good job of getting Cassie (Broadhead Devashrayee) off balance on the last possession.”

BYU struggled to score in the second quarter and trailed 29–19 at halftime. The Rams extended their lead to 15 with 5:24 left in the third quarter but the Cougars fought back to within five to start the fourth. Down 54–47 with 2:33 left, BYU hit back-to-back buckets to pull within three with 2:19 to play. With under 40 seconds left, Devashrayee scored to make the score 56–54. BYU then held Colorado to get the ball back with 7.6 seconds to go, but they weren’t able to tie the game.

The Cougars will look to get back on track against in-state opponent Utah State on Wednesday, Dec. 6.

Thanks to an all-around team effort, the UVU men’s basketball team beat UTSA 88–80 on Saturday night to improve to 5–3 on the season.

“That was a wild game and I’m so proud of our guys,” UVU head coach Mark Pope said. “We worked all summer long, we’ve played conference champs and it’s been as hard as it gets. The outcome of that normally is that it just sucks the life out of you. My guys’ tanks were really low, and they just found some way to find some reserve to win this game against a really good team.”

The Wolverines used runs of 10–3, 11–2, and 10–2 throughout the first half to take the 42–32 halftime lead. But the Roadrunners started the second half with an 11–2 run of their own to come within one. After tying the game at 47, UTSA then recorded 10 unanswered points to take a double-digit lead. UVU would respond with a big 17–2 run to reclaim the lead at 64–59 and never let up.

Five Wolverines scored double figures in the victory. Senior forward Isaac Neilson recorded a double-double with 19 points and 12 rebounds in the victory while junior guard Conner Toolson scored 19 points. Sophomore guard Jake Toolson contributed with 16 points and senior guard Kenneth Ogbe added 13. Senior guard Brandon Randolph finished with 11 points, nine rebounds, six assists and two steals while senior center Manyang had a career-high 14 rebounds and six blocks. UVU finished the night with 36 points in the paint and had 25 points off the bench. They also out-rebounded UTSA 55–29 in the game.

The Wolverines will look for their second-straight win as they face Weber State on Wednesday, Dec. 6.

After earning their first two wins of the season last week, the UVU women’s basketball team lost 71–44 against Pepperdine on Saturday and moved to 2–6 on the year.

Down 16–9 after the first quarter, the Wolverines stormed back to put up 19 points in the second quarter to take the 28–25 halftime lead. But the Waves would begin the second half with a 10–2 run to reclaim the lead. UVU trailed the remainder of the game as they were outscored 46–16 in the second half.

Senior guard Taylor Christensen led the Wolverines with 15 points and senior guard Mariah Seals contributed with 12 points in the loss.

The Wolverines will look to bounce back against Air Force in their first of six consecutive home games on Thursday, Dec. 7.

Real or faux fir Christmas trees: Which is better? Next post