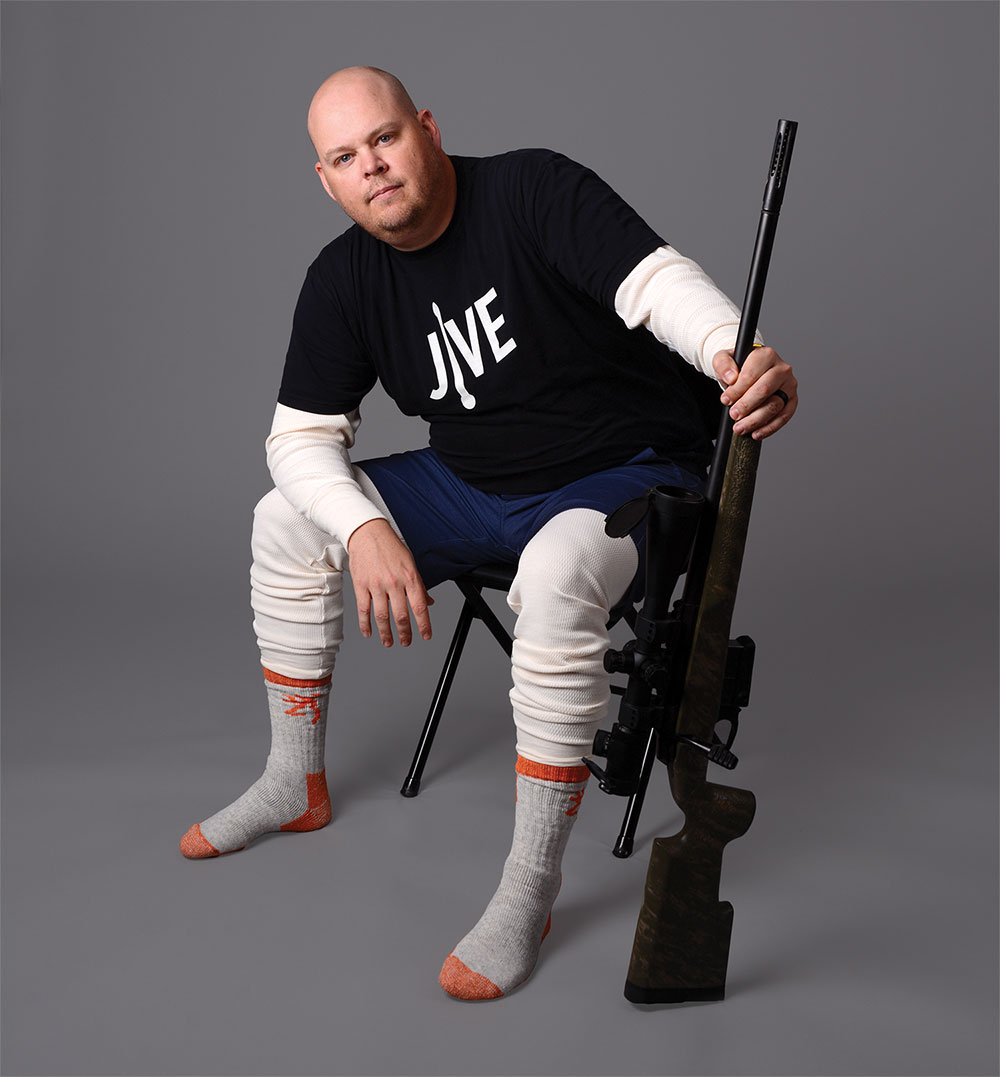 SOCKSTAR: Matthew C. Peterson pulled out his hunting socks and rifle for our photo shoot. In his spare time, Peterson hunts, shoots long-range rifles, and takes a yearly trip to Alaska to catch sockeye salmon. (Photo by Dave Blackhurst/UVBizQ)

Say hello to Matthew Peterson. He’s the co-founder of Jive Communications, a company in Orem revolutionizing the telecommunications industry. (Forbes, in fact, just named Jive to its list of Next Billion-Dollar Startups.) Peterson is a self-taught programmer and considers himself an accidental entrepreneur. But the force was clearly strong with this one. His first business was selling “Star Wars” drawings to friends. “I’d come home from school with more lunch money than I left with, and my parents initially thought I was bullying other kids,” Peterson says. Must have had big guns even then.

BABY STEPS I don’t actually remember what I wanted to be when I grew up, but I knew it would be something with computers. I avoid asking this question to my kids (and young people in general) as it implies they have enough information to be deterministic. The right answer here is “opportunistic,” “no idea” or “happy,” but it’s the rare child (or adult) who get this answer correct.

SPRING IN YOUR STEP Creation and growth. Building something that didn’t exist yesterday gets me out of bed (literally) in the morning. It often prevents me from getting in bed as well.

WHAT’S COOL TO YOU?

It’s cool to be deep in whatever you’re into. If you love beekeeping, know everything about bees, harvesting honey, pollination, splitting colonies, queen mating, making hives, etc. Life is too short and too interesting to stay on the surface. Dive in, and be an expert.

FEET FIRST The most impulsive thing I’ve done? I brought a gun to a photo shoot once. (Editor’s note: We barely noticed!)

THINK ON YOUR FEET I get good ideas while driving or in the shower. My creativity needs space and time. I have to frequently step out of my daily routine to let inspiration flow.

PUT A SOCK IN IT Working really hard and not delivering value. Everyone falls into this trap occasionally, some more than others. Examples here include working on email all day (i.e. letting other, random people set your priorities) or being in marathon meetings without time and space to think and execute. The pinnacle of this pet peeve is people working hard to convince other people how hard they are working. I can’t think of a more useless activity.

COLD FEET Misalignment. When I see departments, teams or individuals who need to be working together vectoring away from each other, it makes me nervous.

HOT FEET Preparation. Even if my theories end up not working out, preparation emboldens me to make faster decisions with more conviction.

BEST FOOT FORWARD It’s Jive. We’ve continued to grow and take advantage of one of the largest TAMs out there. I’m proud of our whole company, my partners, the marketing teams, and many individuals whose efforts have helped form Jive into the company it is today.

IF THE SHOE FITS It’s only been recently that I’ve realized this is likely my life’s path. I now realize what it takes to be a good employee, and I don’t think I’ve got the goods.