Hitting the boards and board rooms 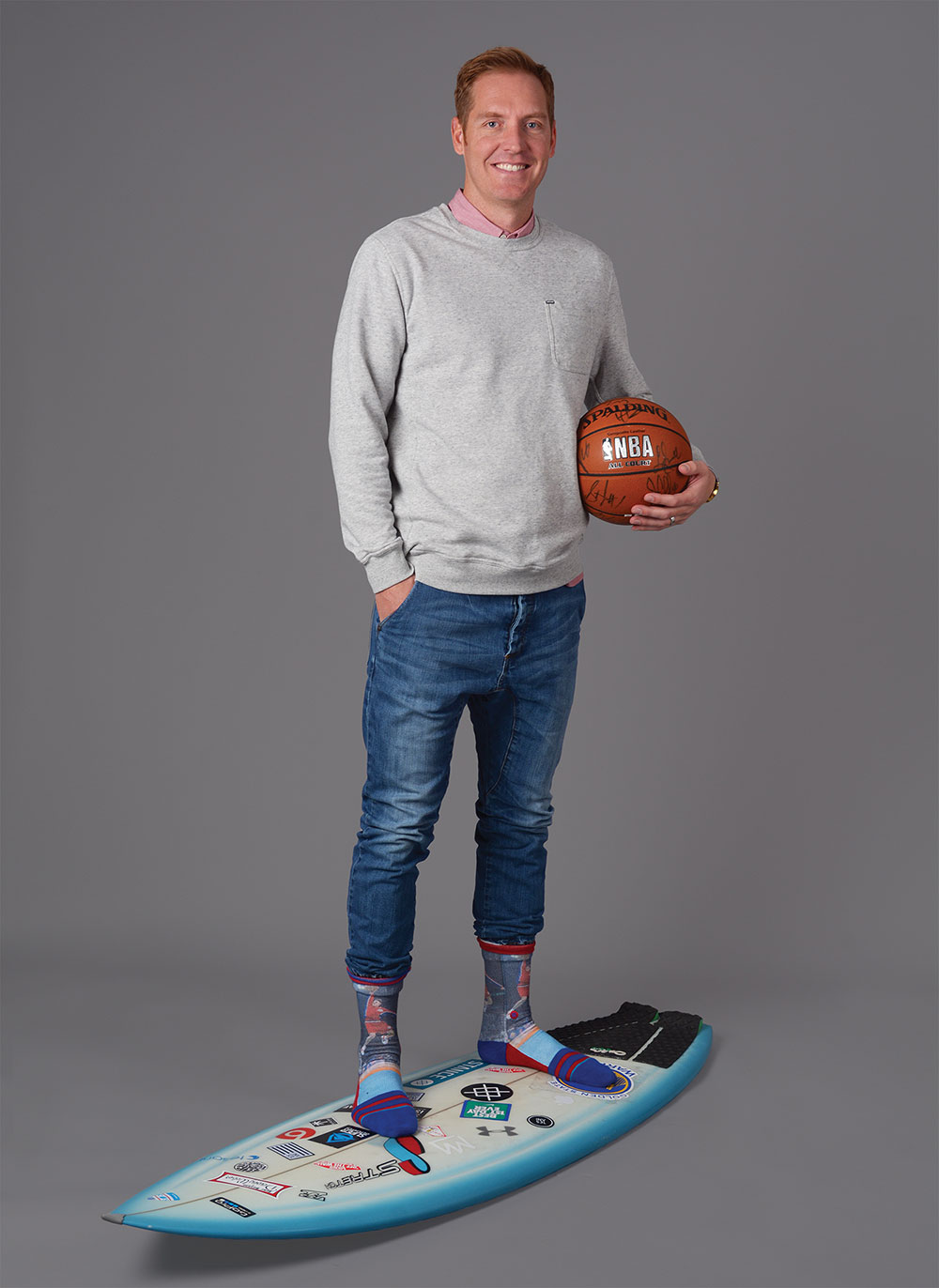 SOCKSTAR: Travis Hansen celebrated “white guys who can dunk” with his Brent Barry knee-highs. Barry won the 1996 NBA Slam Dunk Championships, which is the same year this 6-foot-6 Orem dunker was leading the Mountain View Bruins to the region championship. (Photo by Dave Blackhurst/UVBizQ)

Travis Hansen learned leadership during nearly two decades on the basketball court for UVU, BYU and the NBA. Now he’s fast breaking on the wave of entrepreneurism. “Surfers paddle 90 percent of the time, and 10 percent of the time they get to ride the wave,” Hansen says. “We call those moments our ‘Tesani moments’ and we create them inside our companies.” Hansen’s itch to still play on a team led him to being recruited by Deseret Book’s Sheri Dew to write “The Next Few Years Will Change Your Life.” And now his go-to play is changing others’ lives, first with Sunshine Heroes that has benefited 450,000 children around the world, and now rebounding business strategies with his 55 employees at Tesani, a holding company. His roster of brands includes Eddy HR, Lift Credit, Capital Choice and Tech 9.

SPRING IN YOUR STEP What excites me most about entrepreneurship is developing people and creating businesses and ideas that didn’t exist before.

THINK ON YOUR FEET I love to brainstorm with a small group of very talented people. My extroverted side has to talk through the details.

WHAT’S COOL TO YOU?

People accepting who they are, where they’re from, and what they look like, and then rabidly persisting to make themselves better. Also, anyone who puts their family first is cool in my book.

TWO LEFT FEET I’m a basketball player, so I’ve got a lot to learn. I’m doing things I haven’t done before, but I believe humility is a strength. And I have tremendous mentors in the community like Fraser Bullock.

PUT YOUR FEET UP I spend time with my awesome wife and kids. We love going to Lake Powell, California, the ski slopes, and on humanitarian missions. What I don’t do to unwind is play basketball. After all those years of being trained to win, win, win at all costs, it’s hard for me to just play for fun.

SOCK IT TO ’EM I’m competitive. I don’t like to lose. Actually, I hate to lose. Winning is OK, but losing is the worst. I focus on recruiting awesome people and then I put them in the right seats so we can win as a business. I would do anything for any member of my team right now. I love them all. They are the nicest humans — including our chef Mindy who feeds us beautiful food every single day.

FEET FIRST I do impulsive things around the office like put $200 on the line for whoever can do the most pushups in 30 seconds.

BEST FOOT FORWARD My proudest accomplishment in my career is creating Sunshine Heroes. We have nine children’s centers around the world that are making a big impact. I also measure success by what my employees are able to accomplish. This year, we had eight Tesani teammates buy new homes. I love seeing them make their dreams come true. I’m a successful CEO if there are successful marriages and families underneath me.

IF THE SHOE FITS I thought about my post-basketball career every day. I started reading a lot about business and investing while I was still playing. I didn’t want to go bankrupt after my pro career. I thought heavily about getting into coaching. Then Blake Roney (of Nu Skin) called me and sold me on the idea of starting my own businesses. He taught me that being an entrepreneur allows me to make the biggest impact in people’s lives by giving them a fantastic environment where they can grow and earn a living.