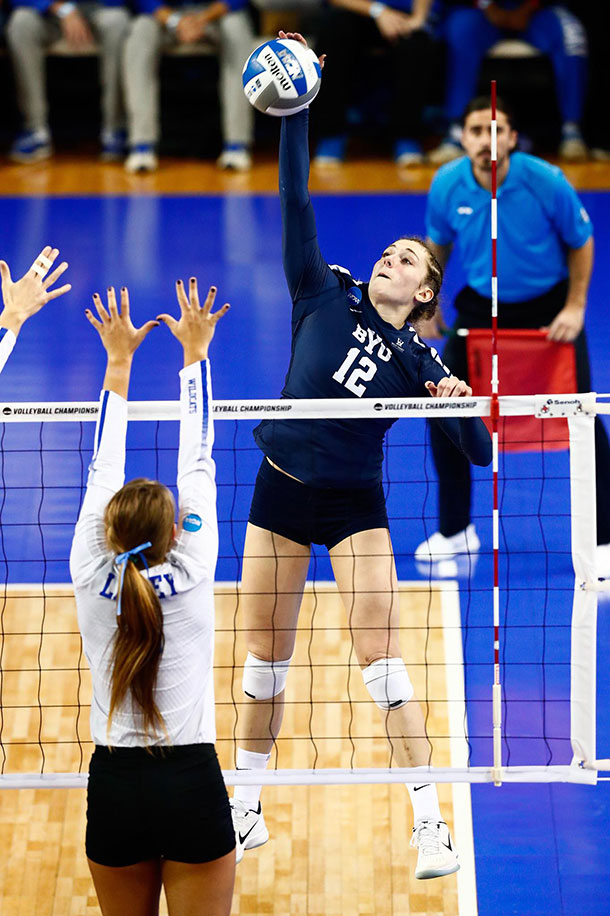 BYU junior Veronica Jones-Perry hits the ball during BYU’s 3–2 loss to Kentucky in the NCAA Tournament. (Photo by BYU Photo)

“I’m very proud of the match our team played today,” BYU head coach Heather Olmstead said. “All year we’ve challenged them to work hard to see how good we could be, and we saw that we are a really good team. Congratulations to Kentucky on a great match.”

The Cougars came out ready to play — taking the first set 25–20. But the Wildcats came right back to take the second set. The third set went back and forth and BYU was able to win the tight set by three. Kentucky again punched back to send the match to a decisive fifth set where their dominant hitters took over to win the match.

Junior outside hitter Veronica Jones-Perry led the Cougars with 24 kills while junior setter Lyndie Haddock recorded a double-double with 10 digs and a season-high 52 assists. Junior outside hitter Lacy Haddock collected a season-high of her own with 12 kills and junior defensive specialist Sydnie Martindale notched a career-high 15 digs. Sophomore libero Mary Lake had 19 digs and freshman middle blocker Kennedy Redding contributed seven blocks in the loss.

The Cougars finished the 2017 season at 30–3 and reached the regional semifinals for the sixth year in a row. Read more about the game here.

The BYU men’s basketball team beat Weber State 74–68 in the Beehive Classic on Saturday night to push themselves to 8–2 on the year. The victory was BYU’s fifth in a row.

“It was a good, hard-fought win for the guys,” BYU head coach Dave Rose said. “There are a lot of different ways to win a game. We had our backs against the wall but we made the plays we needed to make to get this one. You’re always nervous playing an in-state game. They know you so well and they scout you so well. Hats off to Weber State. They played a great game.”

The teams traded buckets in the first half and the Cougars took a 36–32 lead into the break. Weber State opened the second half on a 9–0 run to take a one-point lead, but back-to-back threes from junior guard Elijah Bryant and sophomore guard TJ Haws gave BYU the advantage back. The Cougars were holding onto a five-point lead with only a few minutes to play, but Weber State cut the deficit to two at 68–66 with 1:24 left in the game. The Wildcats had a chance to tie to the game, but a block from sophomore forward Yoeli Childs sealed the victory for BYU. The Cougars then hit their free throws throughout the rest of the game for a final score of 74–68.

Haws led BYU with 24 points while Bryant had 13 points, sophomore guard Jahshire Hardnett had 11 points, and sophomore guard Zac Selijaas had 10 points. Childs recorded his fifth double-double of the season with 10 points and 10 rebounds in the win.

The Cougars will look to extend their win-streak to six in the much anticipated rival game against Utah on Saturday, Dec. 16 at the Marriott Center.

The BYU women’s basketball team beat rival Utah 77–68 in the Deseret First Duel on Saturday afternoon thanks to senior guard Cassie Broadhead Devashrayee’s career-high 36 points. The victory snapped a four-game losing streak and the Cougars improved to 4–5 on the year.

“I’m really proud of this team,” BYU coach Jeff Judkins said. “We’ve had a really tough couple of weeks. The way they fought back, I’m just happy for all of them. Utah is a really good team. They’re probably the best team we’ve played all year. They execute really well and have a lot of fire power. I’m just happy for the girls; it’s been tough.”

Devashrayee’s 36 points came on 8-for-17 shooting along with 18-made free throws. Sophomore guard Brenna Chase had 11 points and senior guard Malia Nawahine contributed 13 in the win. Freshman center Sara Hamson had a near double-double with nine rebounds and nine blocks. Her nine blocks are tied for third most in program history.

Down 35–33 at the start of the second half, the Cougars were able to take a seven-point lead in the third quarter. Utah then hit a three to close the gap to  49–45 heading into the fourth quarter. The rivals went back and forth in the fourth until Devashrayee took over. She sunk two buckets to give the Cougars the 64–56 edge with three and a half minutes to play. BYU never looked back, increasing their lead to as many as 12 on their way to victory.

The Cougars will look for their second win in a row as they face Cal on Saturday, Dec. 16. Read a game recap here.

The UVU men’s basketball team lost 91–83 to Cal State Fullerton on Saturday night to drop to 6–4 on the year.

The game was tight in the first half and the Wolverines only trailed by one heading into the second half. The teams continued trading baskets until the Titans went on a 6–0 run to take a 62–56 lead with 11 minutes to play. UVU then responded with a 7–0 run to take a one point lead, but Cal State Fullerton fought back to go up by nine with less than five minutes left in the game. The deficit was too much to overcome for the Wolverines in the end.

The Wolverines will look to bounce back against Bethesda on Thursday, Dec. 14.

The UVU women’s basketball team beat Utah State 61–43 on Saturday for their second win in a row. The Wolverines moved to 4–6 on the year with the victory.

“I thought it was a good solid team effort,” UVU head coach Cathy Nixon said. “Utah State is a good team. They just beat BYU this week, so we knew we had to come in and play especially well defensively. November was rough with five games on the road, but I think it was a good experience that we’re using.”

The Wolverines opened the game on a 9–0 run and never looked back. They outscored the Aggies 17–7 in the first quarter and led 34–18 at halftime. Utah State cut the lead to single digits with a 9–2 run in the third quarter but were never able to take the lead as UVU kept control of the game. The Wolverines forced 19 turnovers and recorded nine steals as a team.

The Wolverines will look for their third straight win when they face Idaho State on Saturday, Dec. 16.

Nick Emery speaks out about withdrawing from BYU, reiterates intention to return Next post