Looking ahead: a promising future for BYU women’s volleyball 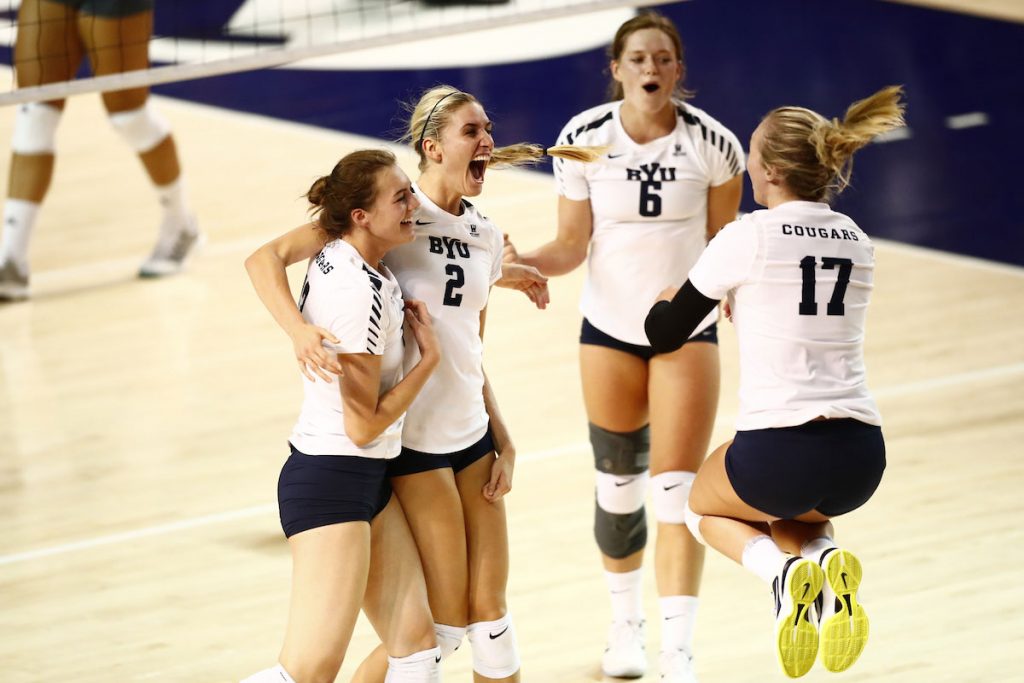 The BYU women’s volleyball team celebrates a point during a game. BYU will return all but one of its starters from the 2017 season. (Photo by BYU Photo)

The 2017 BYU women’s volleyball season is over — but the future looks bright for the Cougars. After losing in the Sweet 16 to Kentucky on Friday, Dec. 8, it already looks like the team is poised for another postseason run next year as they return the majority of their core for the 2018 season.

The No. 13 seed BYU had a dominant run before losing in the regional semifinals to the No. 4 seed Kentucky in five sets (25–20, 17–25, 25–22, 18–25, 9–15). After winning the West Coast Conference with a 17–1 league record, the Cougars swept the first two rounds of the NCAA Tournament on their home court and were on a nine-game win-streak before losing to the Wildcats. Although disappointed that their season had come to an end, BYU head coach Heather Olmstead was proud of how far they went.

“All year we’ve challenged them to work hard to see how good we could be, and we saw that we are a really good team,” Olmstead said.

The Cougars finished the 2017 season with a 30–3 record to add to their sustained success over the years. In the last six years, the BYU women’s volleyball team has won at least 24 matches. Each of those six years the team has made it as far as the Sweet 16 — with the exception of 2014, when the Cougars went all the way and were the NCAA Tournament’s runner-ups. Olmstead has been a part of the coaching staff all of those years, and while many attribute the team’s achievements to her, she says it’s the players who deserve the praise.

“It’s all about your team and the players on your team,” Olmstead said. “I think the girls put in the work, and they’ve done a great job these past three seasons. That’s really what you see in that record — all their hard work, their focus and attention to detail. This year is no different. They’ve won 30 matches, and they’ve had to focus their way through every single match. I think it’s been very rewarding for them.”

“We bring in competitors who want to be great in the classroom and in the gym and they’re just keeping that consistent level no matter who graduates. Everybody is chomping at the bit to get on the court and compete and you can see that.” — Heather Olmstead, BYU women’s volleyball coach

One of those notable players is senior middle blocker Cosy Burnett. In her final season for BYU women’s volleyball, Burnett was named to the All-WCC First Team and received All-Pacific South Region Honorable Mention. She averaged 1.29 blocks per set and 2.21 kills per set, along with hitting a team-best .339 percentage.

Burnett is easily the biggest loss for the Cougars, but the team doesn’t have to look far to see who can step up in her place. Freshman middle blocker Kennedy Redding recorded 1.26 kills per set, 1.27 blocks per set, and had a hitting percentage of .286 in her first season for BYU. Her stellar numbers earned her a spot on the All-WCC Freshman Team and were good enough to make her the WCC Freshman of the Year.

In addition to Redding, the Cougars will bring back some of the best the entire WCC has to offer. Outside hitter Veronica Jones-Perry will return for her senior year while libero Mary Lake will enter her junior year. Both girls were named to the All-WCC First Team and received AVCA All-Pacific South Region First Team honors. As if that weren’t enough, Lake was named the West Coast Conference Defender of the Year (having led the league with 4.55 digs per set) and Jones-Perry made the All-Regional Tournament team (after leading the WCC with 5.58 points per set and 4.82 kills per set).

But it doesn’t stop there for the Cougars. Outside hitter McKenna Miller and setter Lyndie Haddock who were both All-WCC Honorable Mentions will also return to the court for BYU. Haddock averaged 10.17 assists per set and 2.05 digs per set this year and will look to continue that next season for the team. Miller, who averaged 3.06 kills per set was second-best on the team behind Jones-Perry. She also recorded 70 digs and 51 blocks overall and received All-Pacific South Region Honorable Mention accolades.

While other teams will struggle to fill leftover roles, the Cougars are looking stacked for the 2018 season. Past, present or future, Olmstead is pleased with the program and what it means to be a BYU women’s volleyball player.

“I think it says a lot about the kids and the culture that we’re recruiting and their desire to be great,” Olmstead said. “We bring in competitors who want to be great in the classroom and in the gym and they’re just keeping that consistent level no matter who graduates. Everybody is chomping at the bit to get on the court and compete and you can see that. I’m happy we’ve been able to sustain success. I don’t think it’s easy; I think it takes a lot of hard work, but we’re going to keep working hard.”