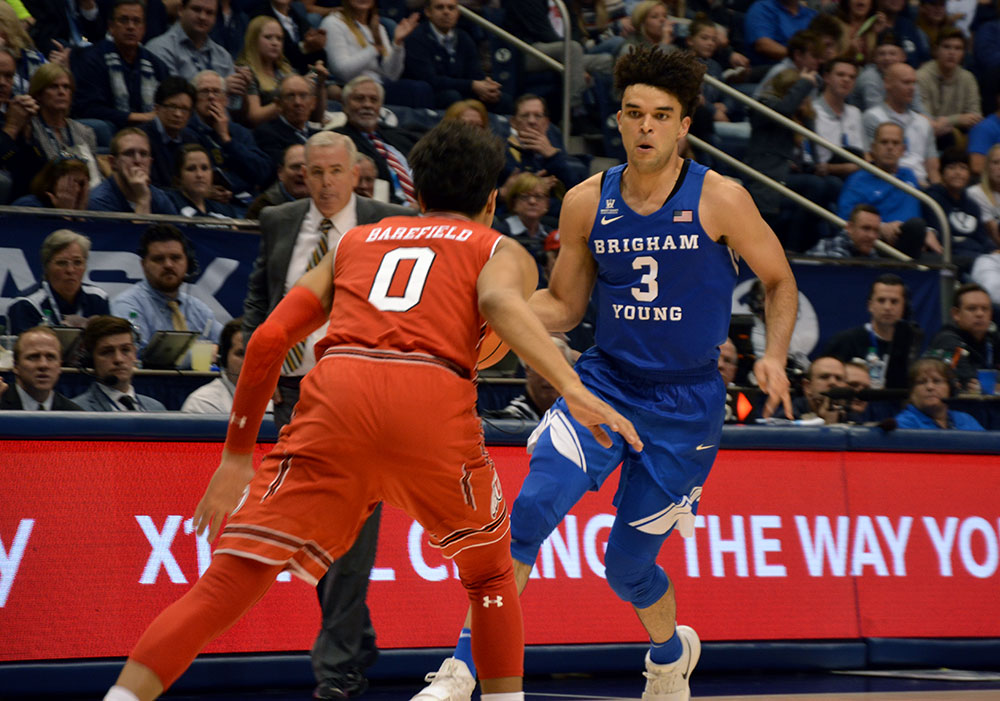 Elijah Bryant carries the ball up the court during a game against Utah in the Marriott Center on Friday night. Bryant scored 29 points in the Cougars 77–65 win over the Utes. (Photo by Rebecca Lane/UV360)

Junior guard Elijah Bryant led the BYU men’s basketball team to victory over rival Utah 77–65 in the Deseret First Duel at the Marriott Center on Saturday night. With the victory, the Cougars extended their win-streak to six and moved to 9–2 on the year.

“What a great crowd,” BYU head coach Dave Rose said. “I thought it was a great college basketball game. It came down to a few plays here and there. I’m happy for our guys and the fans.”

Bryant had a season-high 29 points off of 8-for-13 shooting, 5-for-7 from three point range and a perfect 8-for-8 from the free-throw line. He also had a team-high nine rebounds. Sophomore forward Yoeli Childs contributed 15 points, five rebounds and three blocks in the win.

The rivalry game was close to start until a McKay Cannon three-pointer followed by four quick points from Childs put BYU up 23–11 over Utah halfway through the first quarter. The Cougars remained in control the rest of the way, matching any attempt Utah made to climb back into the contest. A 37–28 halftime lead for BYU was a comfortable one that the Cougars kept for much of the second half. The team outscored the Utes 40–37 in the second half on their way to the 12-point victory.

The Cougars will go for their seventh win in a row as they face Idaho State on Thursday, Dec. 21.

The BYU women’s basketball fell 70–45 to No. 24 Cal on Saturday afternoon. The loss drops the Cougars to 4–6 on the season.

“We got outplayed in every part of the game,” BYU head coach Jeff Judkins said. “We didn’t adjust well and do what we needed to make stops, but I thought we played a good second quarter.”

Cal jumped out to an early 7–0 lead and continued to pour it on. By the end of the first quarter, the Cougars trailed 22–5 but bounced back in the second quarter, outscoring Cal 16–13. Still, the Bears led 35–21 at halftime and then went on a 15–2 run to start the third quarter and never let up. Although BYU outscored Cal 14 to 12 in the fourth quarter, they finished the game in the same 25 point hole that they started the final quarter with.

The Cougars will look to bounce back as they face Montana State on Friday, Dec. 22.

The UVU men’s basketball team lost a tough game 70–69 to Hawaii on Sunday night and dropped to 7–5 on the season.

After both teams struggled to score to start, the Wolverines went on an 11–2 run to take a seven-point lead. But the Rainbow Warriors responded with nine-straight points to claim a two-point lead. After another 9–0 Hawaii run, UVU came back with six-straight points of their own, but Hawaii had the 36–33 halftime lead. Down six early in the second half, the Wolverines went on a 9–2 run to grab their first second-half lead but Hawaii hit back with an 8–0 run to reclaim the lead. The game then went back and forth until the final seconds. With 48 seconds left, UVU went up one but the Rainbow Warriors nailed a three on the next possession to take the two-point lead. Senior forward Zach Nelson then made one-of-two free throws to bring the score to 70–69. The Wolverines had one last chance to win the game but were unable to score.

The Wolverines will look to bounce back as they face Montana Tech on Wednesday, Dec. 20.

The UVU women’s basketball team lost 70–58 to Idaho State on Saturday afternoon at Lockhart Arena. The loss was their first one at home this season, and the team dropped to 4–7 on the year.

“We had out work cut out for us today and tip our hats to Idaho state,” UVU head coach Cathy Nixon said. “They’re a good team, came in and followed their game plan and we weren’t ready to go. Hopefully this will be a lesson for us that we have to be ready for anybody on our schedule.”

Despite 20 points from senior guard Mariah Seals and 18 points from senior guard Taylor Christensen, UVU never had control of the game. Down 13 to start the second quarter, the Wolverines only dug themselves a bigger hole and trailed 40–22 at halftime. Although the team was able to match Idaho State’s 17 points in the third quarter and outscored them by six in the fourth, the deficit was too much to overcome, and UVU lost by 12.

Bright spots for the team included Seals’ season-best seven assists, and Christensen’s career-high seven steals. The senior guards will look to help the Wolverines get back on track at home as they take on Cal Poly on Tuesday, Dec. 19.