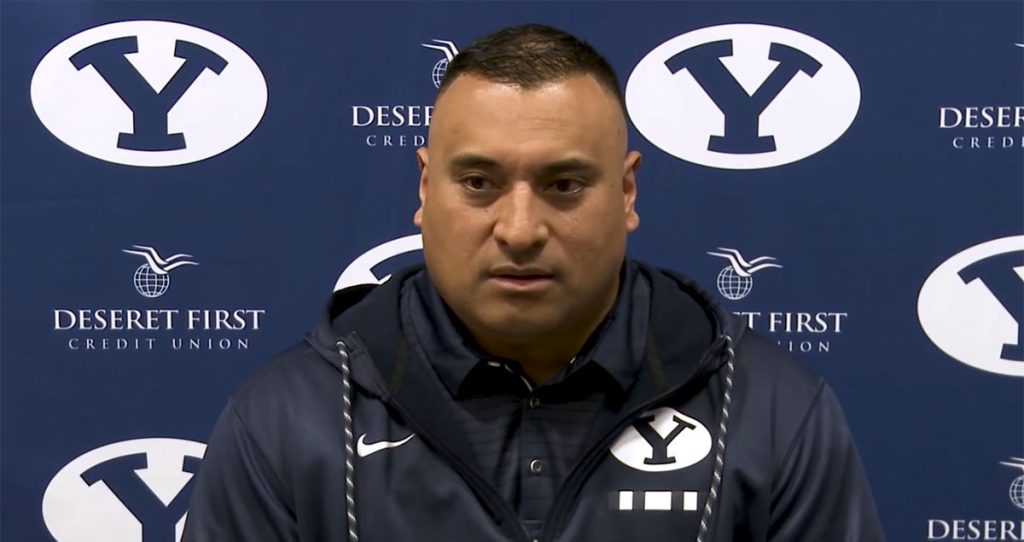 BYU is banking on athletes possessing large frames and versatile games to help turn things around after a difficult football season.

The Cougars brought in 14 players during the early signing period on Wednesday and Thursday. If this first wave of recruits is an accurate barometer for how the remainder of BYU’s 2018 class will look in February, size and versatility will be a defining characteristic of these incoming athletes.

Twelve of the 14 players who signed with BYU on Wednesday and Thursday are listed at 6-foot-3 or taller. None of the players are under 6-feet. All of these new signees possess promising length, versatility and athleticism that the Cougars need at several key positions.

So far, BYU’s 2018 class is ranked 80th nationally by 247 Sports and 86th by Rivals. Here’s a closer look at what we learned about these newest Cougars.

1. BYU is beefing up the trenches

Five offensive linemen joined BYU’s 2018 class on the opening day of the early signing period. Each one possesses a huge frame. These new linemen range in size from 6-foot-5 to 6-foot-8 and from 270 to 305 pounds.

BYU coach Kalani Sitake sees a ton of athleticism within that group of linemen. Sitake believes they possess enough versatility that some of them also have potential to be defensive linemen if they turn out to be a better fit on that side of the ball.

“The point was to try to get big, strong bodies,” Sitake said. “Whether they’re playing o-line or d-line, they’re guys that just can take up space and can move the line for us — whether they’re trying to defend or push guys out of the way. I feel really good about that group.”

Beefing up the offensive line could go a long way to boosting a BYU offense that ranked as one of the worst in school history during the 2017 season. The Cougars ranked 124th among FBS teams in scoring offense with 17.1 points per game and 119th in total offense with 325.2 yards per game during the regular season.

2. The Cougars will have an intense quarterback battle in 2018

Five different players — Tanner Mangum, Beau Hoge, Koy Detmer Jr., Joe Critchlow and Austen Kafentzis — saw time at quarterback for BYU in 2017 because of injuries. A sixth quarterback, Kody Wilstead, redshirted and a seventh, Jaren Hall, is joining the team in 2018 after returning from a two-year LDS mission.

This hasn’t kept BYU from bringing in more quarterback options. Stacey Conner signed with the Cougars on Wednesday and promises to be in the mix right away. Conner committed to UNLV at one time before changing his mind and choosing BYU. Other schools who recruited him include Baylor, Mississippi State, Purdue, California and Washington.

He’s a three-star recruit from Texas who has thrown for 2,766 yards and 14 touchdowns over the past two seasons. At 6-foot-5, Conner has enough size to be an imposing presence in the pocket.

“He’s a great athlete and he’s got a rocket of an arm,” Sitake said. “I feel we’re fortunate to get him out of Texas. This is his dream school.”

BYU added a second three-star quarterback on Thursday when Zach Wilson selected the Cougars over Boise State, California and Oregon. Wilson, a senior at Corner Canyon, is a true dual-threat prospect. He threw for 2,976 yards and 24 touchdowns and also rushed for 719 yards and eight TDs for the Chargers this season.

3. Chinonso Opara could be a rising defensive star

BYU only brought in one defensive linemen so far, but he could turn into an impact player if he reaches his full potential. Juan Diego senior Chinonso Opara offers some similarities to former BYU standout Ziggy Ansah in his football journey.

Like Ansah, Opara hails from Africa. The 6-foot-8, 270 pound lineman came on BYU’s radar when he moved started playing football for the first time at Juan Diego. Opara instantly made a good first impression with his natural ability and sheer strength.

Defensive coordinator Ilaisia Tuiaki noted that even though Opara was raw when he first came to a BYU football camp, he made his mark right away. Opara participated in a ‘Bull in the Ring’ drill where two players are put in a big ring and they try to push each other out without twisting. He had no trouble walking his opponent out of the circle.

“His best years of football are ahead of him,” Tuiaki said. “Big, physical specimen. He walks in here and you would think he’s a former player that’s in the NFL now. He looks like that.”

Opara is a three-star athlete who was also recruited by Utah and Vanderbilt. He has a 7-foot-2 wingspan and has excellent movement and agility for his size.

4. The Cougars cast a wide net outside of Utah

BYU’s 13 early-period signees featured a nearly 50/50 split between local Utah recruits and out-of-state athletes. Two players are from Washington, one is from Arkansas, one is from Texas, one is from Minnesota and one is from South Carolina.

Casting a wider national footprint in recruiting has been a goal from day one for Sitake and his staff. He credits LDS church members with aiding in the recruiting process by steering the coaches to talent in regions where they may not have looked in the past.

“This class has been really good,” Sitake said. “I’ve been calling out all the LDS members to help us recruit and we actually got a lot of referrals. These young men were great referrals that we had.”

Jeff Grimes has only been on the job a few days as BYU’s offensive coordinator, but he already is hard at work getting recruits into the fold. Sitake mentioned that Grimes wasted no time getting on the phones with recruits and their families targeted to fill offensive positions and credited him with helping the Cougars bring in so many offensive linemen so quickly.

Grimes’ presence and just having early signing period helped the Cougars stop the bleeding after several recruits terminated their commitment to BYU and reopened their recruitment in recent weeks. Being able to lock down so many recruits early prevented them from becoming targets by negative recruiting between now and national signing day in February.

“One of the things that I am enjoying the most about it is that it is cleaning up the language of recruiting,” assistant head coach Ed Lamb said. “Commitment has started to mean, ‘Hey coach, I am committed to you. You’re the best thing I’ve got going right now.’ This early signing period gives a chance for that player to let us know that he is truly committed, 100 percent.”

Who are the newcomers for the 2018 football season? Here’s a quick breakdown: