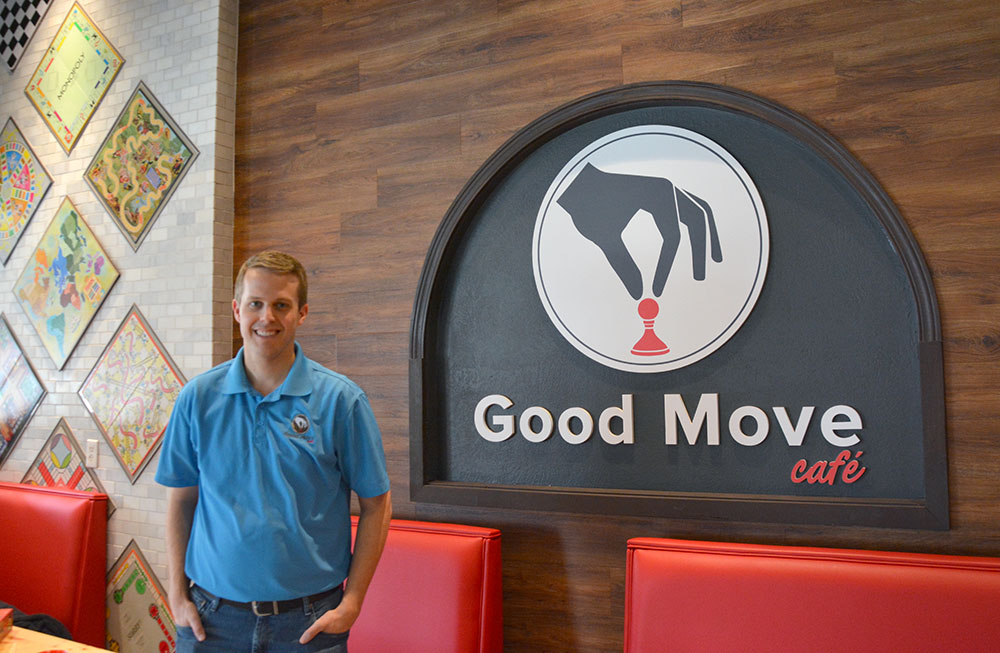 Shawn Moon and his father, Dave, opened Good Move Cafe in October. The new restaurant is also a place where customers can play board games. (Photo by Rebecca Lane/UV360)

At a time when many people play games by having their faces buried in their cell phones or other electronic devices, a new establishment in Provo is serving up a tasty alternative.

Dave Moon and his son, Shawn, opened Good Move Café in October knowing that food and board games naturally bring people together.

“It’s a dual draw of games and food,” Shawn said.

Good Move Café is following a popular trend of board game cafés that are cropping up around the world. It is the first one of its kind in Utah as far as the Moons know.

During the grand opening, Shawn’s sister gazed into the large crowd of customers and pointed out an odd sight to him.

“Nobody in this building is on cell phones,” she told him.

“And it was true,” Shawn said. “Everybody was playing and talking to each other and having a good time.” 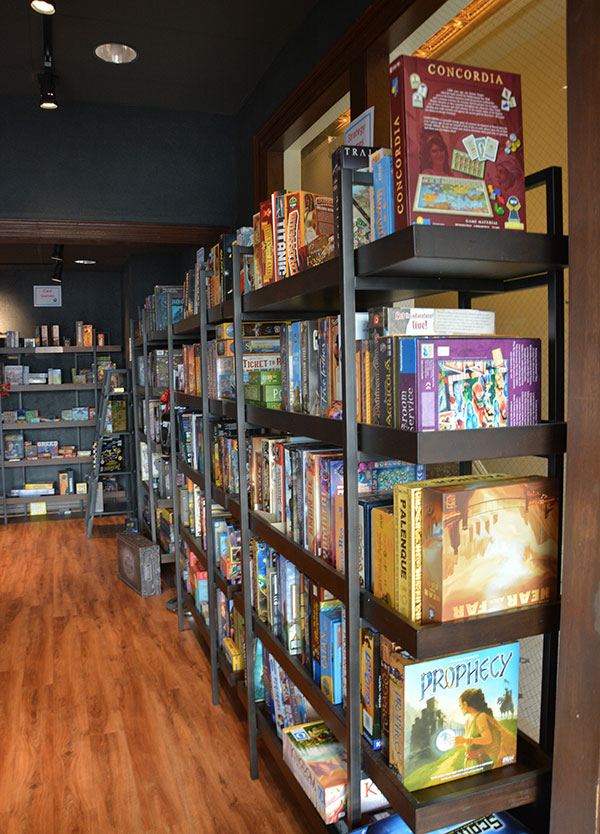 Good Move Cafe already has more the 600 board and card games. (Photo by Rebecca Lane/UV360)

Good Move Café offers more than 600 board games, from traditional favorites like Monopoly and Scrabble to contemporary selections like Codenames and Pandemic.

Families, groups and couples looking for this kind of experience can pay a $5 cover charge to play games. And if they choose, they can order from a menu that features a variety of options like salads, sandwiches and burgers.

“We thought it would make a lot of sense to have food that’s good enough for people to come just for the food even if you don’t want to play games. That was our goal,” Shawn said. “Most people walk through the door and ask, ‘How does this work?’ It’s up to you. You can play games or eat food or do both. You can have whatever experience you want. If you want to play games, you can do that. If you want to make a full evening of it, do that. Or if you just want to eat lunch or dinner, you can do that.”

Despite the popularity of cell phone apps and digital games, board games are a billion-dollar industry.

“There’s a board game renaissance happening right now,” Shawn said. “It’s booming. Articles in the Wall Street Journal and USA Today talk about how the upcoming generation is over-digitized. Board games are a way for them to interact with others. Board games provide face-to-face time that’s enjoyable.”

The board game café genre is spreading. There are hundreds of board game cafes in Beijing, China. They also can be found in the United Kingdom, Indonesia and Malaysia. In the United States, these themed cafés have sprung up in places like Denver, Los Angeles, New York and Kansas City, to name a few.

“It’s a popular concept in Europe,” Shawn said. “They are popping up throughout the U.S. We thought that Provo would be a great fit for that.”

Good Move Café is hoping to attract college students looking for a place to hang out on group or single dates as well as families looking for wholesome, old-fashioned entertainment.

“Some people like to bring their young kids here. There’s something different here than a crayon and piece of paper while they’re waiting for their food. They’re totally happy playing games,” Shawn said. “College kids say this is the ideal place for a date because you can get to know each other better and have a good time together.”

Like most ventures, Good Move Café started with an idea.

“I was picking my parents up at the airport one day and I told them it would be fun if there was a place where the purpose was to play board games,” Shawn recalled. “I knew you could try out board games at game stores. But I was thinking of something more communal, a place to gather and play. I floated that to my dad. He said, ‘Did you talk to your sister? She gave me that idea two weeks ago.’ He has a hobby of designing games. He was aware of board game cafés. We started looking into it.”

They got serious about the concept in June. By Oct. 18, Good Move Café had opened its doors.

“It was a very fast turnaround,” Shawn said.

Once the Moons found a space in downtown Provo, they made the most of the opportunity. Shawn left his job in product development to run the day-to-day operations.

“It’s been a little bit nerve-wracking,” he said. “We left a good job and we’re hoping this works out and gains traction.” 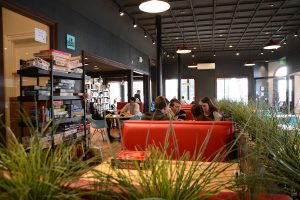 Customers can either rent a table to play games or just eat food or do both. (Photo by Rebecca Lane/UV360)

Not only is Good Move Café a place to relax and unwind with friends and family, but it’s a destination to grab a quick meal, too.

“People don’t have to play games,” Shawn said. “If you’re just looking for a lunch spot, this fits that need as well.”

Stockpiling the restaurant with a wide array of games was “a fun process,” Shawn said.

“We work with a distributor. We did research on what’s popular and what’s coming out new,” he added. “We got a good selection so there’s something for everybody. We’ve only had two or three game requests that we didn’t have on hand. Some people come in and they don’t want to learn a new game so they play a classic. Other people spend three hours learning a new game that’s pretty involved. People come in with different mindsets.”

Upon entering the doors of Good Move Café, don’t expect to see heads down, staring into cell phones. Do expect to see plenty of people immersed in board games.

By offering good games and good food, Good Move Café is where people come together.