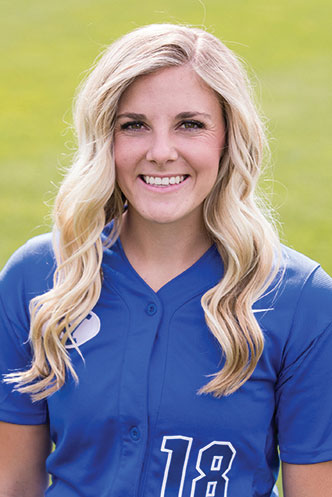 Senior Caitlyn Alldredge played every softball game for BYU in 2017. No. 18 is an NFCA All-Pacific Region First Team selection and was named West Coast Conference Player of the Year. She also earned All-WCC First Team honors. She upped her batting average from .250 in 2016 to .344 last season.

Caitlyn started playing softball when she was 5 and realized her passion for the competitive sport at age 9. Before graduating from Viewmont High School, Caitlyn lettered all four years in softball and basketball. She earned the Rocky Mountain Player of the Year award in 2013 and led 5A Utah schools in home runs with 14 in the 2014 season. Caitlyn has also played club ball for the Salt Lake Pegasus.

During the recruiting process, Caitlyn garnered more attention with softball than basketball.

“I chose BYU because I could get a good education and play on a competitive softball team at the same time,” Caitlyn says.

Caitlyn is studying broadcast journalism and has her eye on becoming a sports newscaster. When she’s not improving her batting average or studying for finals, Caitlyn travels with her husband, Jordan. She prefers tropical destinations but her favorite trip was Europe last summer.