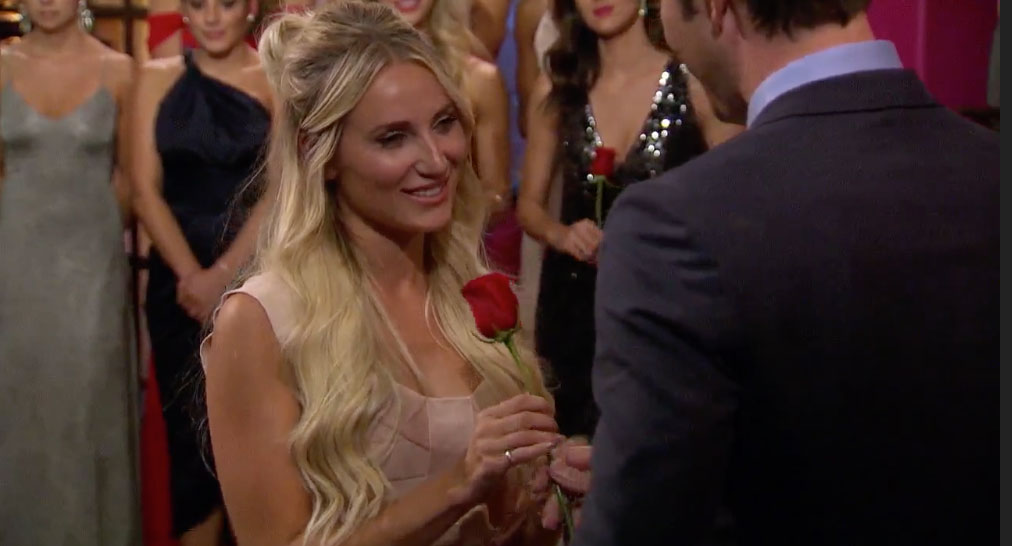 Orem’s Maquel Cooper received the first rose on week two of Season 22 of “The Bachelor.” (Screenshot)

Maquel Cooper, a Utah County photographer, heard her name called first during her second rose ceremony, guaranteeing her one more week on ABC’s “The Bachelor.”

Before the weekly pivotal rose ceremony, Cooper was invited on a group date with 14 other women and Arie Luyendyk Jr., the Season 22 bachelor. To commemorate Luyendyk’s time as an Indy 500 racer, the girls were put to the ultimate test in “The Bachelor’s” first demolition derby. The contestants got to decorate their cars with spray paint and fought to win the competition and Luyendyk’s heart. With one spray paint bottle in each hand, Cooper looked ready to win. Unfortunately, she lost very quickly.

During the cocktail party, Cooper stayed out of the spotlight and out of the televised drama. When it came time for the rose ceremony, Luyendyk chose to keep 18 women for one more week while he sent three girls home. Marikh Mathias — a restaurant owner from Salt Lake City, Utah — also stayed out of the drama and will continue onto the third week.

As the drama is starting and tension is rising in the mansion, Cooper and Mathias will join the other women in waiting for the next fateful rose ceremony on Monday, Jan. 15.

Person of the Year: Rolling out the goodbye mat for Matt Holland Previous post