Provo closer to getting medical school 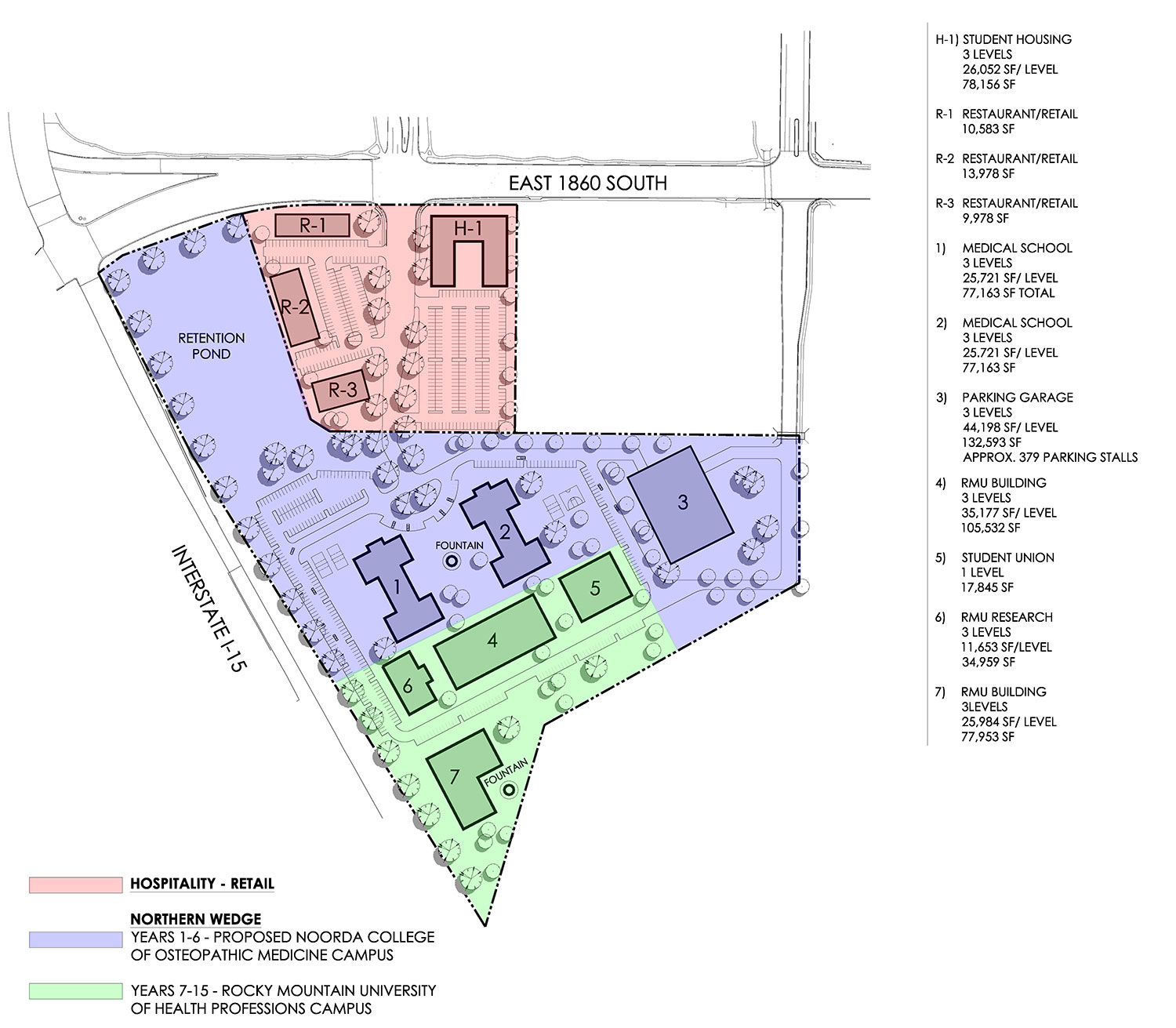 The proposed plan for the medical school would be completed in two phases. (Image courtesy of Provo City)

Unless Wasatch Educational and Provo can’t meet the deal points they’ve already discussed, Provo likely will be getting a medical school on part of what’s now the East Bay Golf Course.

The city council on Tuesday cleared the way for the mayor to start negotiating a contract with the school to sell about 21 acres in the northwest area of the course, known as the north wedge. It holds holes 10, 11 and 12 on the golf course. Once they work out terms of the sale, it will come back to the city council for approval. The school already is under contract to buy the Nature’s Sunshine property that’s 7.8 acres, next to the city-owned land.

The plan is to build in two phases. Phase one would take six years, and include the Noorda College of Osteopathic Medicine campus. In the second phase, years 7-15, it would build a new Rocky Mountain University of Health Professions campus. Rocky Mountain University already has a campus in Provo. The plan also includes commercial development with restaurant and retail space, a student union and student housing.

[pullquote]“I feel like we’re really trying to get this right. I can guarantee I will negotiate a deal everyone will be proud of and feel comfortable with.” — Provo Mayor Michelle Kaufusi[/pullquote]

CDA: The city would create a Community Development Area on the Nature’s Sunshine land, which will be the commercial property. The school would get tax-increment financing. That means it would pay taxes on the current value of the property, not the value once it’s developed) for 12 years. This performance-based incentive would allow the school to recover a portion of the purchase price. “It’s a portion because they’re probably only doing to get back a portion” of what they spend, said Deputy Mayor Dixon Holmes.

Detention pond: The city will ask the Army Corp of Engineers if it can reduce the size of the pond. If the city can reduce the pond, it will transfer about 1.6 acres next to the Nature’s Sunshine parcel to the north wedge at no cost.

Holes: The school will need to move holes 10-12 to the east side of the course. Provo will work with Wasatch Educational to oversee the design and construction of the new holes. The holes must be operational before it can start any work on the existing holes in the north wedge. John Nemelka, representing Wasatch Educational, said the school estimates it will cost less than $1 million per hole to move them. But he didn’t want to give a specific number. If the city approves the sale, Wasatch Educational will get to work right away.
“We need to get the holes moved quickly so we can start building a year from now,” he said.

Remediation: Because the north wedge once was a landfill, the school will be responsible for the costs of making it buildable. Wasatch Educational estimates that cost will be $10.5 million. Appraisals done by the city and school estimate the land — when buildable — is worth between $4.5 and $6 million.

Intent: The city will make a statement that it doesn’t intend to develop any other parts of the golf course.

Future: If the city someday decides to sell all or part of the golf course, Wasatch Educational would have an opportunity to negotiate to buy it.

“I feel like we’re really trying to get this right,” said Mayor Michelle Kaufusi told the council. “I can guarantee I will negotiate a deal everyone will be proud of and feel comfortable with.”

The council voted 6-1 on the resolution, with Kay Van Buren opposing the move.