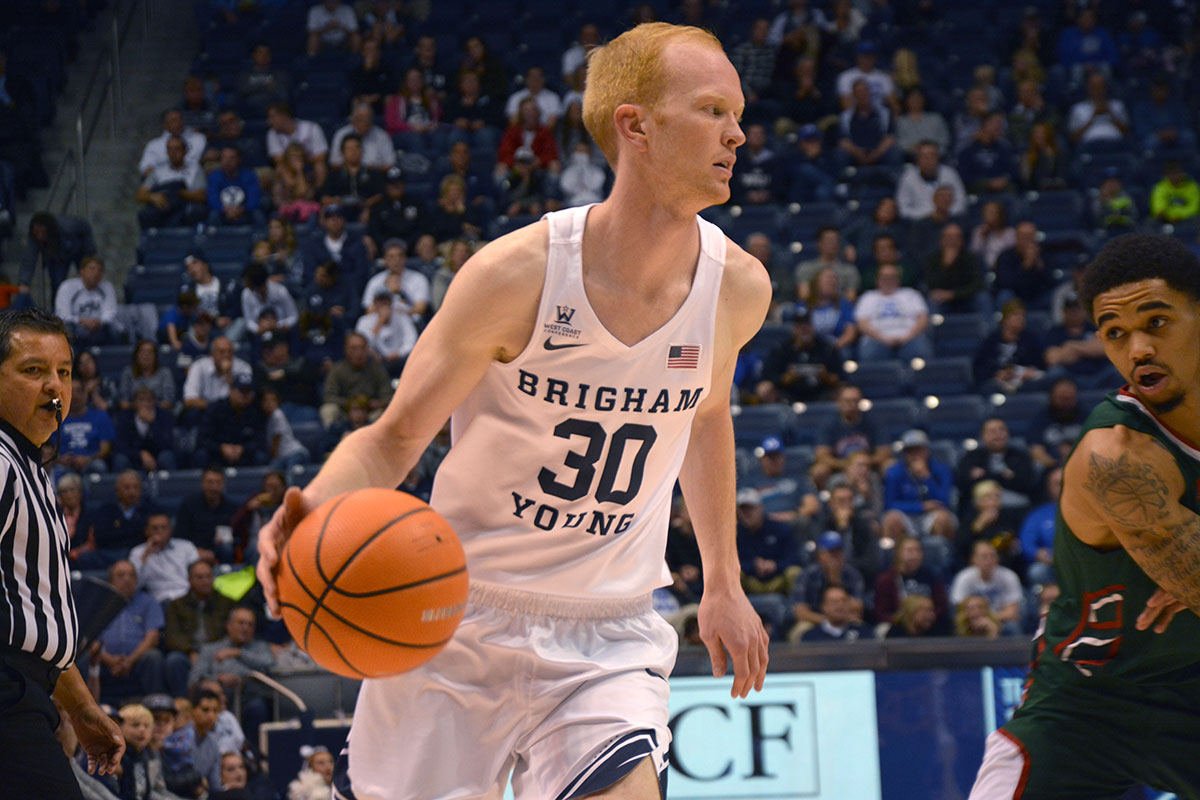 BYU sophomore guard TJ Haws dribbles the ball in a game against Mississippi Valley on Nov. 11, 2017. (Photo by Rebecca Lane/UV360)

For a team that won nine-straight games, eight leading into conference play, BYU has slipped.

In the first two weeks of conference, the Cougars have split the week with one win and one loss. After the loss to Pacific, BYU (13-4, 2-2 WCC) is tied at the middle of the West Coast Conference rankings along with Pacific and San Francisco. BYU sophomore guard TJ Haws attributes that to a passive mental game.

“Probably our biggest focus has been our mindset,” Haws said Wednesday following BYU’s loss to Pacific. “I don’t think we came out with the mindset that we’ve had in past games this season that has helped us win a lot of games. I think we slipped mentally. That’s been our biggest focus in practice, coming in with a chip on our shoulder and getting better every day.”

Haws added that the team, thus far, has done a good job of responding following the four losses this season.

“This team has been good this year at learning and improving on things that we didn’t do so well,” Haws said. “This can be a good thing for this team moving forward, for sure.”

One thing that won’t change is BYU using a “kill” as a measuring point for the team’s defensive success. BYU associate head coach Heath Schroyer brought the term  — which stands for three-straight defensive stops — with him to his second round of coaching for BYU.

“We put a lot of stock into it. At Pacific, we had two kills — and that’s the very first thing we talked about on Monday,” Schroyer said. … “You go down the line, look at the stats, and the games outside of Saint Mary’s when we had five, we’ve had one or two. It’s a huge measurement, in my opinion.”

Schroyer said players now track the stat themselves when they are on the bench and are energized by succeeding in getting a kill.

Now the Cougars’ challenge is to keep the Waves from crashing their conference record further. Despite Pepperdine (3-13, 0-4) being on an non-intimidating, seven-game losing streak, the Waves match Pacific in style of play.

“The physicality of those teams sometimes give us some trouble,” Schroyer said. “But hopefully we’ve learned and we can tweak a few things after that (Pacific) game. Hopefully we can apply that going into this game and have a better outcome. Make no mistake, Pepperdine is a good basketball team.”

Haws adds that the team needs to once again come together on defense (and maybe get a few more kills).

“It’s a great challenge for us because we got beat by Pacific and we have another very similar challenge. We’ll see how well our team adjusts and gets better,” Haws said. “It’s defending as a team. Against Pacific, I feel like we got beat off the dribble and we were all worried about defending our own guy. When you play teams like this, you have to be in the gaps and be helping each other. Everyone’s got to be attached on a string with each other. Hopefully, (Thursday) night we’re all defending as a team. If we can do that, we’ll cause them issues.”

BYU plays Pepperdine on Thursday, Jan. 11 at 7 p.m. The game will be broadcast on BYUtv.